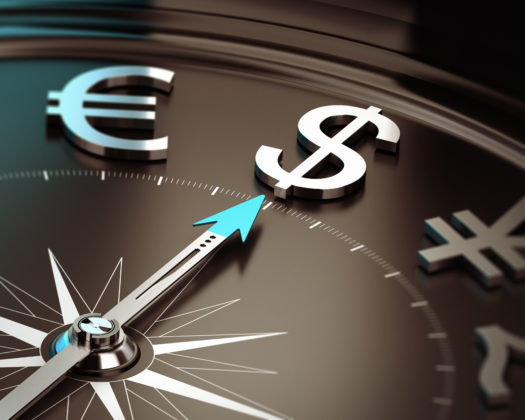 A macro strategist for Deutsche Bank has raised concerns over the dollar losing its safe-haven status if another wave of the pandemic strikes the United States. If the current global reserve currency continues to wane as an “emergency” currency, could Bitcoin eventually step into that role?
Macro Strategist Questions USD Safe Haven Premium As Concerns Over Pandemic Resurgence Grows
When the economy is under distress, certain assets known as safe havens for capital perform best and trade at a premium. These assets include gold, the US dollar, the Japanese yen, and the Swiss franc.
Gold is an ideal example of this. The precious metal’s finite supply makes it a strong hedge against inflation. Bitcoin is also said to share similar attributes due to its hard-coded supply of only 21 million BTC.
When the dollar first decoupled from being backed by gold in the 1970s, it traded at roughly $35 an ounce. Today it is trading at over $1760 after 50 years of inflation.
RELATED READING | GOLD CHART SHOWS WHY BITCOIN IS THE FASTEST HORSE IN RACE AGAINST INFLATION
And although the dollar has inflated over the years since then, it remains the global reserve currency. The nation’s currency has long been sought after, allowing it to remain in a power position.
For the first time in nearly 100 years of power, the dollar is “waning.”
Weakening Dollar Leaves It Vulnerable To Bitcoin, Digital Yuan
At the start of the pandemic, safe-haven assets like the dollar and gold began trading at a premium. Now, a chief macro strategist for Deutsche Bank Asia, Sameer Goel, says investors should be questioning that premium in USD.
Goel fears that if the United States experiences a resurgence of cases, the dollar could be weakened further and left exposed.
“That emergency dollar demand seems to be waning,” Goel said.
He adds that the United States reopening plan for its economy appears “poorer” than the rest of the world.
The US is facing additional unrest due to political and racial tensions. Distrust in the government is spiraling out of control.
The United States also saw the largest surge in new cases of the virus since May 1.
Cases in China are also spiking again, but the yuan has held stable and strong, according to Goel.
For now, he says that the overperformance of the yuan versus the dollar will be temporary. However, with China close to debuting its digital yuan, the dollar could be in trouble.
The pandemic showed the world that it’s time to move toward contactless payments. Digital payments have grown, and reliance on cash and brick and mortar banking has declined.
RELATED READING | DEUTSCHE BANK WARNS OF DISASTER WORSE THAN PANDEMIC THAT COULD COMPLETELY KILL BITCOIN
China is winning the arms race towards digital currency dominance.
The dollar will also have to compete with Bitcoin, a non-sovereign cryptocurrency that shares similar attributes as other safe-haven currencies.
The communist control China enforces over its currency and citizens may prevent a digital yuan from being widely accepted in other regions.
If the US cannot release a competition digital dollar in time to control the digital yuan, Bitcoin may be the best alternative.
Featured image from Shutterstock.

Libertyx has expanded its network to include 20,000 7-Eleven, CVS, and Rite Aid Pharmacy stores where customers can buy bitcoin...