Bitcoin is an unregulated virtual currency designed to eliminate the “middleman” from financial transactions and enable direct, anonymous transactions between users. Bitcoin has several advantages over most other currencies, such as small transaction costs, a public record of transaction amounts and times, and the anonymity of users’ personal information. However, there are some downsides to bitcoin as well.

Bitcoin was created in 2009 by a programmer or group of programmers using the pseudonym Satoshi Nakamoto. Several people have since claimed to be the creator, but none have been conclusively proven. Bitcoin was designed to be a decentralized currency, intended to eliminate the “middleman” from financial transactions. Payments are sent peer-to-peer from the payee to the recipient, with no transaction fees and no need to exchange any personal information.

The currency is completely virtual and is self-sufficient — i.e., it’s not controlled by any central authority. New bitcoins are created through a process called “mining.” Through mining, sophisticated computing equipment solves complex mathematical problems, and the reward is a newly created block of bitcoins.

In the early days of bitcoin, everyday computers had sufficient power to mine for blocks of coins online. As the competition for the newly created blocks intensified over time, more and more sophisticated mining hardware was developed. For example, miners can be as simple as these small devices that can plug into any computer’s USB ports.

Or, they can be complex collections of advanced computing devices working together, like this “mining farm.”

There are several readily available software programs that allow users to either mine for bitcoins on their own or join “mining pools,” which essentially allow participants to combine the power of their mining hardware and then share any blocks of coins that they receive.

However, it’s important to realize that the supply of bitcoins is not unlimited. The production rates for the next hundred years or so have been predetermined, and will decrease over time (currently, 12.5 bitcoins are released in each block, which occurs approximately every 10 minutes). There will be a maximum of 21 million bitcoins created in total, with final production occurring around the year 2140. This prevents things like inflation and dilution from impacting the inherent value of each bitcoin; unlike most currencies around the world, bitcoin has a specific limit on how much can be created.

Each bitcoin can be broken into fractional units, with up to eight decimal places of precision. For example, if one bitcoin is worth $1,000, and you need to pay for a $20 item, then you would send 0.02 bitcoins (abbreviated BTC). The term millibitcoin, or mBTC, is used to represent 0.001 (one one-thousandth) of a full bitcoin.

To be perfectly clear, there is no such thing as a physical bitcoin, despite the abundance of pictures like this one: 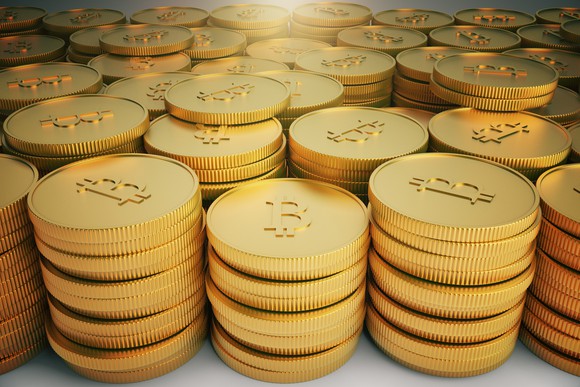 Every finalized bitcoin transaction is kept on a massive public online ledger known as the “blockchain.” This contains information such as the time and amount of each transaction, but it does not contain any personal information.

How to store and spend bitcoins

People who wishes to hold and spend bitcoins must create a bitcoin “wallet,” which stores the information needed to complete bitcoin transactions. The bitcoins themselves remain a part of the blockchain, but your wallet contains the information necessary to access and use your own bitcoins. There are several software providers of bitcoin wallets, and with a little research, you can find one that’s best for you.

Bitcoin isn’t universally accepted yet, but over the past several years, the list of businesses that accept bitcoin has grown. Just to name a few, the current list includes Overstock.com , Microsoft , Expedia , Newegg.com, Home Depot , DISH Network , and Intuit . Many small businesses accept bitcoin payments as well.

Of course, with the anonymity of bitcoin comes the potential for it to be used for illegal activities, such as gambling or buying drugs or weapons. This was a bigger problem in the earlier years of bitcoin than it is now, but it still exists to some degree.

While bitcoins are still used for illicit activities, common legitimate uses of bitcoin include paying for internet services like web hosting and advertising. There are also several popular online stores set up for the specific purpose of allowing people to shop with bitcoins, and mainstream retailers are increasingly accepting the virtual currency.

Another common use of bitcoin is for low-cost money transfers, particularly to foreign countries. The average cost of a bitcoin transfer is about $0.04, and it takes just over nine minutes to complete, making it appealing for people who need to send money overseas.

Bitcoin is popular for a reason, as it has several advantages over traditional currencies that many people find attractive. Just to name some of the biggest reasons to use bitcoin instead of say, U.S. dollars:

Every currency has its flaws (yes, even the U.S. dollar), and since bitcoin is so new, it has some unique drawbacks that people should be aware of before getting involved:

The bottom line on bitcoin

While bitcoin certainly has some advantages over traditional currencies, it’s important to be aware that virtual currencies are still in their infancy, and as such, they’re bound to have some growing pains along the way. At this point, however, the long-term viability of bitcoin as a universally recognized currency remains to be seen.

The $15,834 Social Security bonus most retirees completely overlook
If you’re like most Americans, you’re a few years (or more) behind on your retirement savings. But a handful of little-known “Social Security secrets” could help ensure a boost in your retirement income. For example: one easy trick could pay you as much as $15,834 more… each year! Once you learn how to maximize your Social Security benefits, we think you could retire confidently with the peace of mind we’re all after. Simply click here to discover how to learn more about these strategies .

Despite the massive potential of the blockchain technology, bitcoin’s blockchain protocol has rather limited transaction throughput and latency rates. Throughout...