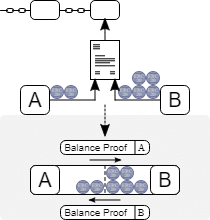 There has been a long-running obsession with the throughput of transactions for the Ethereum community. Many believe that technology won’t have a future unless this is resolved. This mainly affects traders, especially those loyal to DEXs, and push to solve it has lead to many exciting avenues.

Entire blockchains have been born around the scalability dilemma, such as Algorand. Ethereum has had the problem at the core of its existence from the beginning. Now the Raiden network appears to be a possible solution for the network.

Now, the Raiden platform acts as a second layer payment channel for Ethereum. The ETH network the second most used public blockchain in the world, due in part for being the first to allow smart contracts in the blockchain. But the current slowness if it when processing payments make it a bad contender for businesses as a point of sale (POS) service for groceries and other necessities.

The gold standard for the crypto world is the VISA payment network with its large transactions per second capacity and ease of use. On top of all, if Etehreum is widely used, the transaction fees will increase to balance the application, limiting is potential. Ethereum has to scale for it to be widely accepted.

Enter the Raiden Network which an algorithm called Balance of Proofs to increase speed and security. The main advantage is that Raiden doesn’t need global consensus, like the main Ethereum network, making transaction confirmation fast and easy.

Since Raiden works outside the main network, it is known as an off-chain solution or layer two solutions. Not all of the transactions need to be recorded in the main Ethereum network for confirmation on the Raiden platform to occur.

When using this network, the Ethereum Ledger is not the backbone of transaction authentification. It is only used to verify what Raiden calls “net claims resulting from off-chain transactions”. Potentially this means that Raiden could be sue to push more transactions per second without full main net verification.

Imagine a series of country roads connecting two major cities. The cars on them can only travel at a slow speed since the width is narrow and there is congestion all the time. Now, the two cities get their act together and build a large highway connecting the two. The travelers wanting to arrive at their destination faster have the option of going to the freeway and, for a fee, moving faster than the people on the roads.

How can Raiden work?

Well since the protocol is an off-chain solution, the platform locks the Ether used for the transaction into a smart contract which frees the funds once the operation is complete. The smart contract is bidirectional, meaning both parties in the using the contracts can transact with each other. The channel is open, in the form of the smart contract, until all of the parties involved conclude to end it.

The accounts participating in the creation of a channel are given certificates at the start of the process. Not all the checks are needed though since the users only have to know the latest one to continue as members. This is the work of the algorithm developed by the project which records all the checks in the channel at any given point in time. This means economic activity in the network is secured by the balance of Proofs protocol.

If a party member fails to give its balance in the allowed time the channel is still closed. The balance of the closing member will be used to calculate the funds of the silent party, and all the Ether will still be transferred. This is the mechanism Raiden has implemented to prevent one member from holding the funds in an account hostage.

All transactions on the Ethereum network occurs with the associated gas price used to tax computations. So, there is a disconnect when talking about the fee in relation to the amount of Ether or a Token transferred. If the network is experiencing high use, a small transfer is discouraged because the fees become too large. The push-pull relation between gas fees and on-chain transactions give way to periods where the economic incentives are against using Ethereum for small amounts.

This is not the case on the Raiden Network where large or small amounts are economically feasible giving the fee structures. Also, payment can be split into smaller pieces over an extended period all for the same fee.

The bonus is time to reach confirmation is no longer dependent on the parameters of the main network, and it becomes practically instant. This is because verification on the main Network depends on block generation, coupled with, the lapse it takes a miner to pick add the records to the block being created from the various unsettle transactions. This is no longer a necessary process when Raiden, the smart contract, as the Proof of Balance, can handle throughput with the speed of a text message.

Learn about block size and the reason why there is a block limit.

Needless to say, this method directly impacts the scalability of the Ethereum protocol. The transactions per second on a blockchain are limited block size and block confirmation time, no matter how many active nodes participate. On the other side, the upper limit of the Raiden Protocol scales linearly with the quantity of the participants, resulting in a scalable and secure solution for future transactions.

The innovation brought by the Raiden Network to Ethereum is hard to understate. The main network is leveraged for its security while the Raiden Protocol provides speed and flexibility.

The post What is Raiden? The Lighting Network of Ethereum appeared first on CoinCentral.