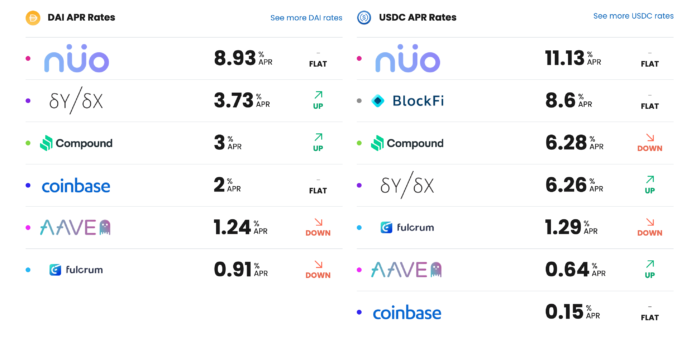 Yield farming is a method to harness idle cryptocurrencies such as coins, tokens, stablecoins, and put those assets to work in a decentralized finance fund, often generating interest rates that range between conservative 0.25% for less popular tokens and above 142% for some MKR loans.

A full list of interest rates and projects can be found at Staked.us and DefiRate.

Passive income from DeFi lending and staking isn’t guaranteed and actual returns will depend on each protocol’s approach. The risks run the gamut of missing out on the promised returns due to slow transactions or market volatility, or even losing your entire collateral.

To understand yield farming, we can draw comparisons from traditional finance: money is issued by a central bank, and then commercial banks lend those funds to businesses and individuals. Banks levy an interest rate on those loans, thus making a profit.

In the cryptocurrency DeFi economy, a yield farmer plays the role of a bank, lending their funds to boost the use of coins and tokens. Thus, any cryptocurrency owner can hold their own funds while also participating in lending activity, essentially becoming a one-person commercial bank. This increases the flow of value within the decentralized ecosystem system, which in turn, generates returns for the lender.

“Farming” refers to reaping high annualized percentage gains while providing liquidity for various projects. In a way, yield farming resembles the more traditional practice of staking coins, where the user remains in control of their asset, but locks it temporarily in exchange for returns.

Yield farming has quickly become a point of interest for cryptocurrency enthusiasts and investors, often advertised for providing theoretical “fast gains” in the wake of high risk.

In this article, we’ll explore:

Yield farming is a relatively new concept within the Decentralized Finance (DeFi) ecosystem, and the term entered the popular lexicon of the cryptocurrency world in 2020.

DeFi, an ambitious copy of the traditional finance system, is completely on decentralized Internet protocols. Instead of legal hassles and third-party intermediaries, DeFi offers a no-barrier entry to risk exposure.

DeFi sprung from one of the use cases for the Ethereum protocol. The possibility for cheap and borderless transactions pushed the creation of startups that tried to mimic banks and financial brokers. DeFi applications branched out in various directions including novel cryptocurrency trading algorithms, derivatives trading, margin trading, money transfers, and most importantly, lending markets. Other important DeFi platforms combine cryptocurrency lending and cryptocurrency interest accounts into single user-friendly platforms, such as the Celsius Network and BlockFi. These two companies are leaders in an industry where offering more than 6% on BTC and 8.6% on stablecoins such as USDC and USDT is considered industry standard.

Another important aspect of DeFi and yield farming are trading projects and decentralized exchanges. These projects also offer yield farming, but the liquidity is used for trading. Prominent projects include Bancor, Augur, and UniSwap.

So, where does yield farming come into play?

Yield farming depends on the inflows and outflows of a certain anchor asset, usually DAI, a dollar-pegged coin that originated with the Maker DAO protocol. As of August 2020, DAI is backed by ETH and BAT deposits, and is used for loans, arbitrage or algorithmic trades. The DAI dollar peg makes the system more predictable by setting an intuitive value for each token, $1. Yield farming depends on a collateral of ETH or another token, which are used for loans and generate passive income.

A DeFi user will usually lock in the chosen coins by using the MetaMask browser plugin. Locking in funds means the wallet will communicate with a smart contract on the Ethereum network. Depending on the logic of the smart contracts, there are various ways to extract value, though the most traditional one is to levy an interest rate on a cryptocurrency loan. Users will pay fees to transact on the Ethereum network, and due to heightened interest, those fees may rise rapidly, or make the network too congested to be able to participate successfully.

In the middle of March 2020, ETH prices dropped sharply, creating a perfect storm of market panic and the triggering of multiple algorithms on the Maker DAO platform. The Ethereum network also slowed down transactions, not allowing the owners to increase their collateral. Multiple deposits (known as vaults) were liquidated, and DAI briefly lost its dollar peg.

In the case of falling prices, the 150% over-collateralization can help offset the risk partially. Projects like DeFi Saver can automatically increase the collateral to stave off liquidations. Liquidations happen when the minimum collateral requirement breaks down due to price volatility.

DeFi tends to work better in climate climbing asset prices, because the collateral locked for yield farming is safer. For example, if ETH prices drop by 33%, this would liquidate most deposits on Maker DAO. Smaller price fluctuations also mean holding ETH may, in the long run, be more profitable than yield farming.

Alexander Ivanov, the founder of the WAVES protocol, compares DeFi to the frenzy for initial coin offerings (ICOs). Ivanov is still optimistic about the future, only warning against another bubble due to irrational enthusiasm.

The difference between an ICO and yield farming is that coins can be taken out of the DeFi protocol at almost any time, whereas participating in an ICO meant exchanging ETH or BTC for a new token.

The new token could be changed back only by trading, once it was listed on an exchange. In DeFi, tokens become immediately liquid as they get pairings on the UniSwap exchange, a decentralized, automated trading protocol.

Are Your Funds Safe While Yield Farming?

In DeFi, the lender is always in control of their funds, as operations happen in automated smart contracts and do not require the oversight of third parties. Unlike token sales, a person can withdraw their collateral at almost any time.

However, smart contracts can dictate how and when you can withdraw your collateral, so be aware of you’re getting into, in particular during the cases of liquidation.

What are the Risks of Yield Farming?

Locking your funds in vaults and using smart contracts is inherently risky. Smart contract exploits, which abuse the logic of the contract to generate high returns, and liquidations are a major threat to collateralized funds. The other big risk is the peg of the DAI stablecoin, which must retain its $1 value. Breaking the $1 peg will diminish the value of loans, and create panic selling and quick removal of liquidity.

The boom of DeFi also brought multiple untested protocols, using new smart contracts that led to malfunctions. The YAM DeFi protocol drew in close to $300 million in funds, but due to unforeseen smart contract behavior, led to the printing of thousands of billions of extra tokens. Other projects also release untested smart contracts, which may lead to losses of funds.

Another major concern is a more recent development: the Compound DeFi fund shows more than 1.3 billion DAI in its lending and borrowing markets, while there are around 421 million DAI coins created as of August 14, 2020. This situation resembles a debt bubble, in which cryptocurrency assets are created via the process of lending, thus circulating value that is artificially amplified by yield farmers.

This situation may put pressure on the DAI dollar peg, and create more serious fallout in case of liquidations. So far, as of August 2020, greed and a price boom allow for the rapid growth of Compound DeFi.

What are the Best Projects for Yield Farming

Maker DAO is one of the earliest successful attempts at cryptocurrency lending. Initially, lending DAI backed by ETH drew the initial bulk of capital into DeFi.

Compound, a similar lending platform, followed soon after. Compound also evolved beyond lending, launching its own incentive COMP token. This caused an explosion in DeFi funding between July 15 and early August, when the amount of funds locked in yield farming doubled, from roughly $2 billion to above $4 billion.

Both Compound and Maker DAO competed for the top spot in DeFi, based on locked value and on their well-known brands. In terms of algorithmic trading, projects like Augur, Bancor, and dy/dx remain prominent in the crypto space.

Alternatively, and not particularly “yield farming” per se, decentralized lending platforms and cryptocurrency interest accounts such as BlockFi and Celsius provide upwards of 8.6% APY on stablecoins without many of the complications of the yield farming outlined in this article, so they’re worth checking out if that’s up your alley.

Final Thoughts – What is the Future of Yield Farming

Things tend to happen very fast in the cryptocurrency world, and yield farming seems to have spiked into the mainstream foray in the blink of an eye.

If one was compelled to cast a prediction for the future of Yield Farming, we recommend looking at all possibilities– both positive and negative.

On the other hand, negative possibilities range from crisis events such as price crashes or exploits that manage to trick the smart contract and reap gains from collaterals. DeFi isn’t regulated and doesn’t come with the legal protections that come with more centralized financial institutions.

For instance, DeFi tokens are not considered securities, and the US Securities and Exchange Commission hasn’t taken any decisive actions against them.

While some yield farming projects are well-established and draw in the bulk of collateral, new DeFi algorithms are constantly popping up. Some DeFistartups use copied and unaudited smart contracts, posing risks for unexpected operations and effects. The YAM yield farming project, for instance, has recently crashed, taking some of the market collateral with it.

In August 2020, the WAVES platform expanded into DeFi. A long list of former ICO tokens that were repurposed for various forms of DeFi, starting with BAT, LINK, 0x, Kyber Network. A complete list of the most current and active DeFi tokens can be found at CoinGecko.

Yield farming is a mercenary-like approach to cryptocurrency, where risk-takers seek out the highest yields, causing token price volatility along the way. Many DeFi projects are still in their nascent phases and can be rather difficult to understand, yet many newcomers are rushing in to get a piece of the pie. We advise our readers to do their own research into the intricacies of each platform– don’t lock in any funds you can’t afford to lose.