The global cryptocurrency community has been abuzz with speculation in the wake of a leaked white paper linked to the popular, encryption-based messaging app Telegram.

News of Telegram’s plans to launch a Blockchain platform originally broke in December, although it still remains unclear if the project legitimately exists.

Cointelegraph has reviewed the leaked white paper, which lays out ongoing plans to launch Blockchain services and its very own cryptocurrency using Telegram as a springboard.

While the legitimacy of the white paper and its actual association with Telegram has not been confirmed by the Durov brothers, who founded Telegram, the white paper promises some interesting applications to users of the messaging app and wider audiences.

With access to 200 mln Telegram users, the developers of the project hope to reach a massive audience with what they are calling the Telegram Open Network (TON).

TON is being touted as a scalable multi-Blockchain architecture using a proof-of-stake protocol to address what the white paper describes as major hurdles facing cryptocurrencies like Bitcoin and Ethereum.

The white paper cites a lack of capacity to manage high volumes of transactions, unfriendly user applications and a limited market to use cryptocurrencies for goods, content and services as stumbling blocks TON will address.

By using Telegram’s massive user base, the developers hope to reach the critical mass required for mass adoption if its services.

According to the white paper, the TON Blockchain is “a scalable and flexible Blockchain architecture that consists of a master chain and up to 292 accompanying Blockchains.”

The various protocols chosen promise to be able to process millions of transactions per second.

This will be facilitated by the use of an infinite ‘sharding’ paradigm which will allow the Blockchain to split and merge in response to different network loads. Instant hypercube routing will supposedly manage transaction across different Blockchains. Along with a proof-of-stake protocol, the use of 2-D distributed ledgers is said to allow TON to build “new valid blocks on top of any blocks that were proven to be incorrect to avoid unnecessary forks.”

Once their Blockchain is up and running, TON will launch a number of services with the Blockchain. This will include a data storage service, a virtual private network service, a DNS as well as its very own payment system.

The payment system will use TON’s very own cryptocurrency, called Grams.

Users will be able to use Grams to pay for content and services that will be provided by Telegram and other decentralized services.

Of course, to make all of this a reality, TON will launch a token sale sometime in the first quarter of 2018. There will a total supply of five bln Grams, of which 200 mln (four percent) will be held by the development team in a four-year vesting period.

In what is described as a bid to prevent speculative trading, 52 percent of the overall supply will be held in the TON reserve during the initial development and launch. The other 44 percent will be sold using a formula ensuring a steadily rising price per token.

Now that we’ve got through the nitty gritty of the proposed TON ICO, we can discuss the legitimacy of the project and its purported link to Telegram, its founders and developers.

Both Nikolai and Pavel Durov, as well as a number of Telegram’s senior developers, are listed in the white paper. However, there has been no official comment from either of the Durov brothers.

Nevertheless, there seems to be mixed sentiment on social media.

Some users are excited by the promise of a mix of decentralized, encrypted data services linked to TON.

You can already find in the internet leaked Telegram ICO white paper, but the most excited part for me that there are TON Storage(aka decentralized Dropbox), TON DNS(friendly account names), TON Proxy(anonymizer) #Telegram #TON #TelegramICO

Another user expressed concerns at the initial holding structure of Grams by the development team:

@durov Does your team have any clue of how POS works? I’m sure your ICO will do very well, but to be quiet honest in your white paper proposal you’re already a threat to “Ton”. Coins/Tokens in POS are not to be distributed like a company and holding 52%. What in the world pic.twitter.com/YdgE96fcjp

Conversations with a couple of Blockchain and cryptocurrency experts bring to light a number of points to consider.

The best way to describe this white paper is ‘fun fiction,’ according to ICObench.com advisor Vasily Sumanov.

With a massive user base, it’s not hard to see why fans of Telegram would want to see it metamorphosize into something far greater. A state free community with its very own cryptocurrency and linked services – a crypto-utopia of sorts.

If this piece of work really is fun fiction, the authors have produced a compelling white paper that promises many things. The sharding technology may not be available in current projects, but it’s also not clear if there is a need for a Blockchain that can store that much information. How much space would a node need to store a Blockchain that has 292side chains?

The writers have also used good-practice mechanisms in the restriction of available tokens during the initial stage of development, which would chase away speculative investors in favor of long-term capitalists that see real value in the technology.

If this ‘leaked’ white paper has done anything, it has shown that there is great interest in an ICO that is linked to established applications that provide crucial real-world solutions.

Telegram and its creators will no doubt have appreciated the attention, but whether they are actually busy concocting their own legitimate ICO based on Blockchain technology remains to be seen.

Sumanov, who also doubles up as an academic researcher, believes the Durov brothers would not leave anything to conjecture, with a guns-blazing announcement if they were truly launching an ICO.

“Really, it is too simple and too ‘good.’ I think, that if Durov plans to make an ICO, he will make a public announcement with a really original white paper. Taking into account that Mr. Durov is a libertarian, I believe he will somehow make the integration of his own cryptocurrency and services into Telegram. Will be this done using an ICO or not? Only time will tell,” Sumanov told Cointelegraph.

Conversely, ICOBox founder Mike Raitsyn is far more optimistic about the authenticity of the white paper. Given that the Durov brothers have previously spoken about the possibility of an ICO, Raitsyn says the documents look legitimate.

Furthermore, he insists that the success of Telegram and the network it has built could be the catalyst for a truly universal cryptocurrency.

“Despite their revolutionary potential, existing cryptocurrencies Bitcoin and Ethereum lack the qualities required to attract the mass consumer. The current state of Blockchain technology is very promising, but it is obvious that the market is experiencing an acute need in a mainstream user-friendly cryptocurrency that would attract mass users and employ the full potential of the new technology,” Raitsyn said.

The technology that will power TON is also a first according to Raitsyn, providing unique features like sharding technology which promises to increased speed and scalability to its Blockchain to support a massive user base.

The expert isn’t concerned about the grand scale of the project, saying the broad scale of offerings is a natural progression of Blockchain technology.

“TON will be a third generation Blockchain project which would offer vastly superior capabilities to users. TON has been designed as a multi-Blockchain platform, which would meet the growing demand for a platform offering a broad range of services. It will provide speed and scalability, intuitive user interfaces and an engaged use base to exchange value.”

If Raitsyn is correct, the Durov brothers will make announcements later this year to either confirm or deny the legitimacy of this project.

Polynom Crypto Capital founder Alexey Ivanov told Cointelegraph that the most crucial part of TON’s plans is the massive Telegram user base. If they make good on their promises, only social media giants could rival them.

“They have almost a 200 mln audience to reach and give them the payment platform. They can only be outdone by Facebook or Google,” Ivanov said.

Meanwhile, adverts promoting the presale of Gram tokens have been seen on Facebook. 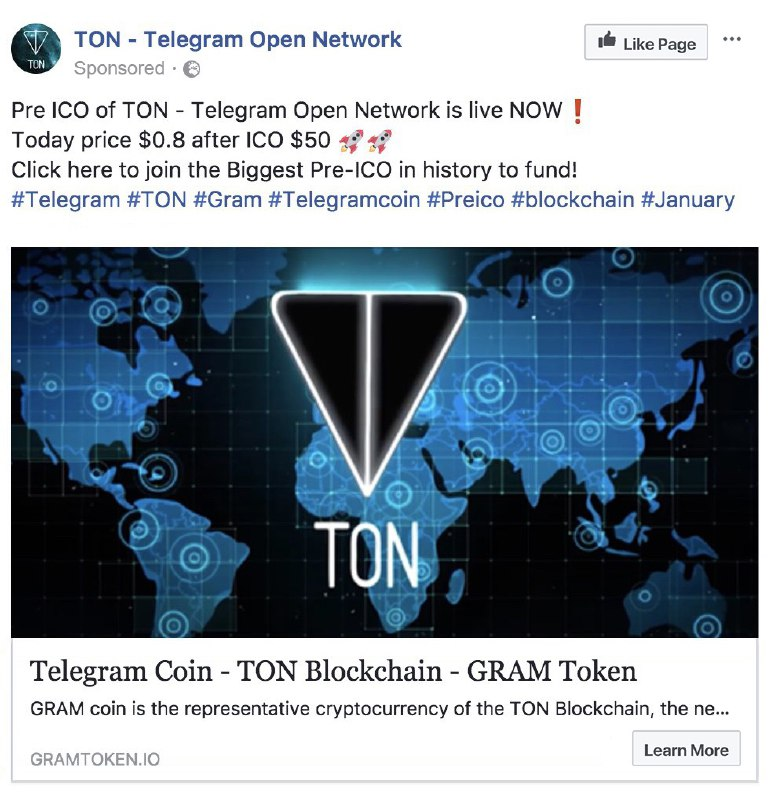 On Tuesday, Jan. 16 Pavel Durov sent out a tweet warning people of potential scams around the TON ICO.

This is scam. Be careful.

However neither one of the Durov brothers have come out with a public statement regarding the TON ICO.

Despite Regulations, One South Korean Crypto Exchange Rises to the Global Top