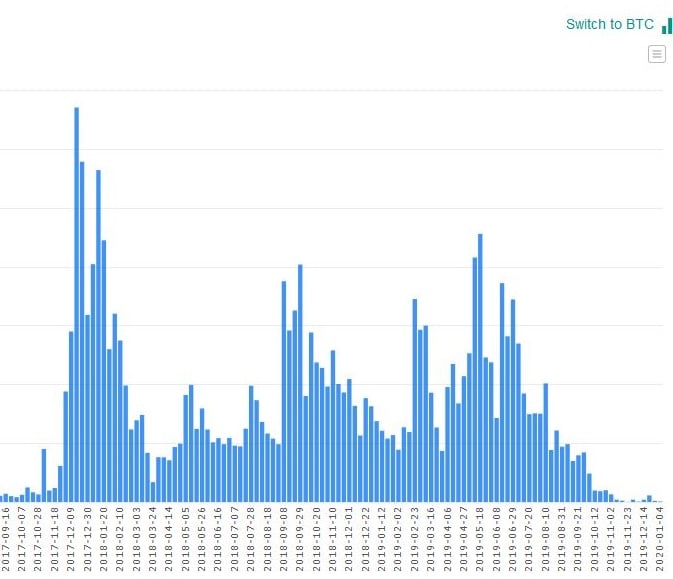 Tensions between the U.S. and Iranian administrations are believed to have triggered the most recent BTC price surge. Bitcoin prices surged monetarily on January 7 in anticipation of a situational escalation.

It led to some investors seeking refuge in safe-haven financial assets to hedge against an imminent calamity. Bitcoin rates spiked to $8,168, a new high in 2020 from $6,946 before cascading to sub $8,000 figures.

Some crypto pundits have hypothesized that Iranians clamored for bitcoin in the face of rising tensions to safeguard their finances. This is as the saber-rattling with the world’s most formidable military power ensued.

An analysis of top crypto exchanges, including LocalBitcoins, however, paints a different picture. Iranians didn’t scramble to buy bitcoin after the killing of Iranian Major General Qasem Suleimani. Far from it.

The latest trade volume data shows that buy-sell orders in the country have been at an all-time low in the past month.

The latest trade volume data shows that Iran buy-sell orders have been at an all-time low. (Image Credit: CoinDance)

Of course, it is possible that investors in other countries anticipated a BTC price surge and bought into the hype, but a global analysis indicates a similar trend. So, what caused the sudden change in trajectory?

Looking at crypto exchanges alone can’t provide a clear picture of what’s really going on within the markets. Other underlying factors, such as market-sentiment within investment circles, have to be taken into account.

According to a research report published by Research Gate, an increase in the number of texts posted on Telegrams crypto investment groups often correlates closely with market movements. A spike in chatter is usually a positive price-action indicator that typically manifests within a week.

This assertion has been supported by long short-term memory (LSTM) neural network analysis models. It was previously thought that Google Trends volume changes could be used to predict crypto prices accurately.

Telegram groups have, however, proved to be the more reliable indicator. An analysis of Monaco Crypto Trading, the most popular digital currency investment group on Telegram, reveals an uptrend in chatter as U.S. – Iran tensions rose. In a nutshell, there was no inherent demand for cryptocurrencies per se during the most recent bitcoin price hike. The anticipation of rising demand is more likely to have caused the price upswing.

The post What Triggered the Recent BTC Price Surge, Beyond the Iranian Crisis appeared first on CoinCentral.

Best Altcoins to Look Out for in 2020

In the crypto ecosystem, things change fast. Even though we may make predictions of different cryptocurrencies, some of the metrics...