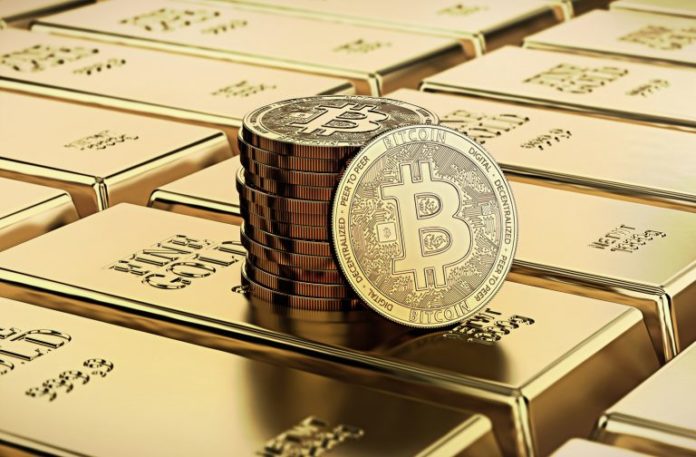 Flashy bitcoin price speculation is a favorite game of crypto Twitter news outlets and commentators all over. After all, who doesn’t want to hear that their modest stash of satoshis could someday moon and be worth millions? Sensation aside, there remains a well-grounded case for continued rise in price where top cryptos are concerned, and should bitcoin’s market cap overtake that of gold — an asset limited in many ways compared to crypto — prices could indeed be out of this world.

Gold’s global market cap currently sits at around $8 trillion. Last year, at this time the precious metal’s capitalization sat closer to $7 trillion. As fiat paper worldwide continues to be devalued by governments and their reckless economic policies, many goldbugs see the upward trend continuing, and they may be right. Habitual bitcoin detractor and well-known gold enthusiast Peter Schiff has made a name for himself in making such predictions. What’s not talked about as often in precious metals circles are the very real physical limitations that come with the beautiful asset in regard to its function as money.

While Schiff’s frequent criticism of the U.S. Federal Reserve is well-received by many in the crypto space, his attacks on bitcoin and the views of crypto influencers and innovators such as Bobby Lee are generally not. Lee, CEO and founder of the Ballet Crypto physical crypto wallet and brother of Litecoin creator Charlie Lee, recently predicted that “the #flippening will happen within 9 years and $BTC will shoot up past USD $500,000.”

#Gold is at about $8 trillion today, which is 50x the worth of #Bitcoin.
I predict the #flippening will happen within 9 years and $BTC will shoot up past USD $500,000.
And with all of the money printing that’s happening globally, $BTC will actually very likely be over $1 million! https://t.co/hbqGze38k5

Like Schiff, Lee cites irresponsible economic policies as a contributing factor to the rise of his favored asset class. Unlike Schiff, however, Lee doesn’t view crypto as “fool’s gold” people should run from. Indeed, one of the main perceived strengths of bitcoin and crypto is that unlike gold, it has an extreme advantage in ease of transfer and portability. It’s no small feat for someone out of country to send a couple bars of gold to family back home. It’s heavy, significant fees will be charged, and applicable state regulations must be cleared. Crypto, on the other hand, has the ability to be sent for negligible fees instantly, without “necessary” or built-in interference from a third party or regulator. Charlie puts BTC at a possible $500,000 in nine years. Notably, a recent statement from Bitcoin.com Executive Chairman Roger Ver, made in conjunction with a unique Facebook giveaway, suggested that BCH could also achieve new heights:

So what would prices look like if bitcoin did overtake gold in market cap? Well, as price is ultimately the product of myriad market variables and ever-changing economic context, such predictions are not easy to make in spite of how often they’re put out there. Still, basic calculations via market capitalization can be done assuming things don’t change too drastically much regarding current applicable factors.

If, for example, one of the top coins flipped gold’s current market cap of ~$8 trillion, the resultant price would be impressive. With a circulating supply of 18,040,537 BTC at press time, a market cap for BTC of $8 trillion would result in a single coin worth about $443,400. Even assuming the “flippening” doesn’t take place until the hard cap of 21 million coins in theoretical circulation is reached, a price of around $380,000 results. Should bitcoin cash (BCH) flip the market cap of gold given current data, the resultant price is a shimmering $441,800 per coin. None of this is to factor in changes in demand, tech innovation, adoption, etc., for better or for worse. Considering the amount of excitement and FOMO likely to occur in such an event, prices would likely be much, much higher.

While these numbers might seem “far out” upon first encounter, it’s important to note that BTC achieving dollar parity was a big deal less than nine years ago in February, 2011. BTC, worth $1 then, has since increased by about 900,000%, bringing us to the current price. A September 2017 report by the National Bureau of Economic Research states that “The equivalent of 10% of world GDP is held in tax havens globally,” and with part of crypto’s appeal itself as an “offshore haven” of sorts (although admittedly one that is drawing much heated attention from powerful government agencies such as the IRS and FBI) it’s interesting to look at bitcoin potentially replacing these tax havens’ share of value, if only as a thought experiment. The projected global gross domestic product (GDP) for 2019 according to IMF and United Nations aggregated data was set at ~$88 trillion last year. Should BTC, BCH, or BSV flip 10% of this amount today, with current circulating supplies of about 18 million each, the resultant value would be a token worth ~$488,888, not far from Bobby Lee’s prediction regarding bitcoin flipping the market cap of gold.

Other typically hot topics include bitcoinization and hyper-bitcoinization, whereby bitcoin overtakes the dominant currency in a given region or overtakes and makes obsolete the currencies of the whole world. The nearly $4 trillion world reserve currency USD circulating in the current M1 money supply would require each bitcoin (whether bitcoin cash, core, or BSV), at a roughly calculated circulation of 18 million, to be worth about $222,000 in order to serve as a replacement for M1. Swiss multinational bank UBS put this figure at $213,000 over the summer, prior to continued expansion of the monetary supply. Of course, none of this includes the massive amounts of debt and credit on the books in USD as well, which would further dynamize and shape bitcoin price in a hyperbitcoinization event, resulting in astronomical price changes the likes of which likely defy speculation, due to the confluence of cultural and socioeconomic changes that would result from such a financial earthquake. A Grain of Salt Goes a Long Way

There’s little easier than making ear-tickling predictions about the riches just around the corner for anyone holding even a small amount of crypto. Should the forecast fail, just chalk it up to unpredictable markets and shout out a new one with equally impassioned bluster next week. Should it succeed, be sure to remind everyone of how you “totally called it” with that “Feeling bullish” tweet two days ago. This isn’t by any means to say that predictions are bad, only that the overconfident and suspiciously detailed ones don’t usually seem to pan out.

While markets really are sometimes anyone’s guess, there are yet sound economic principles and hard realities which can be used to make valuable observations. As fiat currencies and governments worldwide continue in their seeming endless love affair with reckless debasement, the underpinning principles of limited supply, permissionless crypto assets with competitive utility continue to convince many that the flippening may be just around the corner.

What are your thoughts on bitcoin’s potential to “flip” gold? Let us know in the comments section below.

The post When Bitcoin Overtakes Gold – How High Can It Go? appeared first on Bitcoin News.

11th November, 2019, Singapore - Gearing up for a full-house turnout this evening at the opening event of Singapore Blockchain...