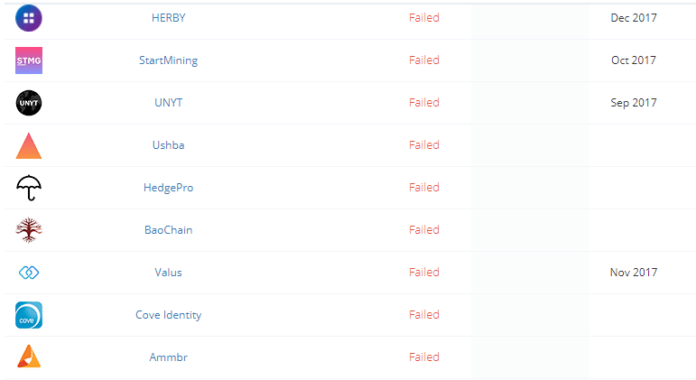 Why are So Many ICOs Failing?

Overall, ICOs improved in terms of the number of investors and the amount of investments. According to some estimates, ICO fundraising totaled over 5.6 billion USD last year. Despite this success, a few projects have either stopped responding to questions from the public or have collapsed altogether. It’s important to take an in-depth look at the current status of ICO investing and determine whether recent trends of ICO failures will remain prominent throughout 2018 and beyond.

The quality of an ICO whitepaper is crucial in deciding whether or not a project will have long-term potential. If you’d like to learn more about how to read an ICO whitepaper, here’s our guide to help you get started.

Looking at the Data

The alarming thing to note about this statistic is that these are only the projects that have already failed. An additional 113 ICOs are currently deemed to be ‘unresponsive’ to questions from the public on social media. This could equal to a lot of additional failures from the 2017 cohort of ICOs in the near future.

When looking at this data from a general business perspective, it is not surprising. Many startups do fail. However, ICOs are failing much faster than most other traditional businesses or even businesses in other high-tech sectors.

Before jumping to conclusions and stating that the era of the ICO is over, we should consider looking at the exact reasons why many of the newer projects have collapsed. There are certain patterns to watch out for when evaluating the potential of a cryptocurrency project to raise funds during an ICO and sustain success post-ICO.

One of the most important things investors should look out for when investing in an ICO is whether or not a token will be able to gain user adoption and be useful for solving problems with its application in the real-world. Unfortunately, many projects are simply bad ideas from the start.

One example, is when Silber Pfeil Energy Drink and Mercedes partnered to on an ICO in 2017. This case proved that brand name recognition is not enough to raise funds. According to a press release from last year, “There is current a program taking place where one AMG Token counts as an initial coin offering (ICO). Sellers will receive one token ICO for every can of Silberpfeil that they sell.”

The concept of earning tokens as a reward is a good idea. However, if the tokens aren’t actually deemed to be useful by enough people, it is hard to successfully promote their usage. The entire concept of having to use a specific cryptocurrency to buy a specific energy drink is not very practical for most people. Thus, this project failed to showcase its potential long-term value to investors. In turn, it failed to raise enough funds to make it past the ICO stage. Many projects in the 2017 ICO cohort faced technology issues from the start (i.e. scalability and security) that prevented them from gaining traction in the market. The Dao, a project launched in 2016, is the biggest failure in cryptocurrency to date in terms of amount raised. The main reason for this project’s failure was its lack of security.

This project raised a staggering 11.5 million ETH in assets in April/May of 2016. However, it quickly failed after an attack on June 16, 2016 resulted in the loss of 3.6 million ETH. The DAO promised decentralization and transparency, but it failed to gain sustained success due to its many security exploits. Despite this project’s failure, it represented a much-needed movement towards greater decentralization. Since the collapse of Dao, more projects have begun to offer better solutions for decentralization and the future of crypto.

This is a good example of how a promising project can also fail fast. Understanding all the technical aspects of the blockchain technology behind a project is good but may be not always practical. However, it is essential to at least have a high-level understanding of the technical specifications of a project before investing in an ICO.

While cryptocurrency is designed to create a global monetary system, not all regions are equal in terms of ICO success rate. For example, projects based in developing nations have a proportionally lower success rate than those in developed nations.

According to the information provided by Tokendata, Africa is over-represented when it comes to ICO failures. Tingo Coin is one example. While this project had a few issues (i.e. lack of team member verification, small team size, etc.), its main problem from the start was likely its highly-specific focus on becoming ‘Africa’s first Agricultural VAS-backed blockchain option’.

While there are some ICO investors in Africa, none of the world’s top ten ICO investment nations are located within Africa (as of March 2018). It is very difficult to gain widespread adoption of a cryptocurrency focused on agriculture within Africa without having a large number of investors to begin with in this continent. The number of potential investors from outside the continent who will invest in agriculture is also quite low.

By creating ultra-specific usages for a new cryptocurrency and limiting its geographic usage, many projects similar to this one are doomed to fail before starting. While it could also be a bad idea to invest in an ICO with an adoption strategy that is too general, ICOs that design cryptocurrencies that have a limited/specific market to begin with seem even more likely to fail. Investing in any ICO can be risky, so it’s important to look at projects that are proactively working to avoid the mistakes mentioned above. Of course, some (if not the majority) of even the most promising projects have the potential to fail. If you plan to HODL your ICO investment, you should always assess the project’s long-term strategy.

In summary, the ICO is not dead. The fact is that there are many ICOs that emerged in 2017 and early 2018 due to the overall market hype. Many don’t have the strategy to last.

Should investors be alarmed by this trend for the rest of 2018? Most likely, but this shouldn’t scare off investors. Failure for startups is considered the norm for every market.

Will more ICOs continue to fail? Yes, but that doesn’t mean that people should stop investing. In fact, the principles of investing are the same as they have always been.

A rise in the amount of ICOs just means that investors have to do a little more research to make the best possible investment decisions.

The post Why are So Many ICOs Failing? appeared first on CoinCentral.