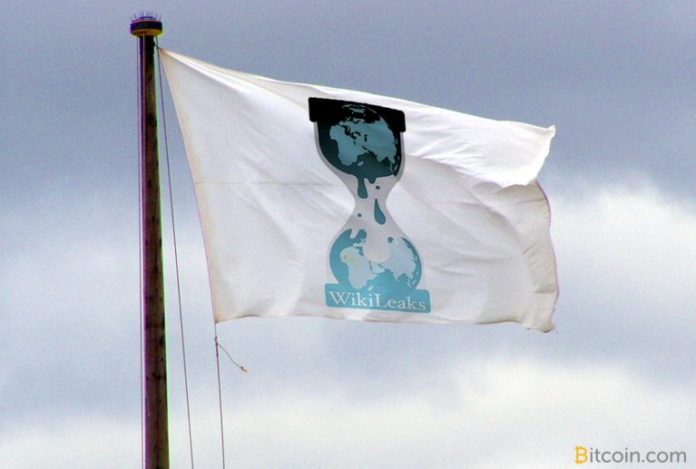 With the founder of Wikileaks behind bars, it’s been a trying time for activists who believe in spreading freedom and truth in an age steeped in lies and manipulation from parasitic central bankers and bureaucrats. In order to show support for Julian Assange, Bitcoin Cash (BCH) developer Chris Troutner decided to upload the entire Wikileaks cache of documents to the Inter-Planetary File System (IPFS) and the BCH chain so the truth can be read forever.

Truth Is Treason in an Empire of Lies

Since April 11, there’s been a lot of attention directed toward Wikileaks founder Julian Assange. His arrest stems from indictment charges from March 2010 that allege Assange and former U.S. Army intelligence analyst Chelsea Manning cracked the country’s Department of Defense server password. The leaks that were distributed back then caused chaos for politicians and financial elites supporting the military industrial complex because they exposed horrific crimes against humanity. One specific video leaked in 2010 by Wikileaks called Collateral Murder displayed a U.S. helicopter gunning down targeted individuals but they also killed innocent people including children, journalists, and Reuters photographer Namir Noor-Eldeen age 22. After the trove of documents, files, and videos were released, Wikileaks faced a financial blockade where payment processors like Paypal, Visa, and Mastercard prevented the website from receiving donations. This was when the Bitcoin network came to the rescue and Wikileaks decided to accept the digital currency for donations. Chelsea Manning (then known as Bradley) was charged with treason and sent to Guantanamo Bay. Assange went on the run, faced charges in Sweden for an alleged rape case, and found himself hiding in the Ecuadorian Embassy in the U.K. for the next seven years. Manning was since pardoned by U.S. President Obama before he left office, but was recently arrested for indictment charges against her and Assange. After the April 11 arrest, Assange is now being held in London at the moment and may face charges in Sweden and be extradited to the U.S. as well.

Lots of Bitcoin proponents have supported Assange and Wikileaks for years for leaking thought-provoking documents without hesitation. Since the arrest three days ago, Wikileaks and Assange have managed to gather $41,000 in BTC donations. Another endeavor that took place in order to show support for Wikileaks was when BCH programmer Chris Troutner uploaded the entire Wikileaks cache to the BCH chain and IPFS. This means the 30GB of files can be downloaded and viewed by anyone at any time for as long as the BCH and IPFS networks exist. The website Wikileaks.cash has the entire database which includes documents stemming from the controversial wars in Afghanistan and Iraq, leaked FBI data, Homeland Security papers, Barclay’s tax avoidance, the infamous Bilderberg meeting transcripts, and FEMA reports. Of course, Wikileaks.cash can be accessed directly but the archive can also be downloaded via torrent software. Troutner has also published step-by-step directions on how to help syndicate the Wikileaks archive over IPFS. Essentially, you need to install IPFS and initialize an IPFS node to get the daemon running. You can optionally connect the IPFS node to the cloud server and download the content, which also helps syndicate it. From there, you can pin the content so the computer will continue to share it. Troutner’s walkthrough is hosted on Memo.cash which is also embedded into the BCH chain.

The bureaucracy today has created an Orwellian nightmare and many have grown worrisome about the removal of financial privacy and seeing whistleblowers being scorned for telling the truth. A system like Bitcoin, with its censorship resistance, yields many benefits that include furthering the dissemination of information the elite would like to stifle. Having the Wikileaks data hosted on the BCH chain and IPFS helps bolster the documents’ preservation and syndication over time. These days, telling the truth truly has become a revolutionary act and bitcoin cash, with the help of the community behind it, is helping to keep that insurrectionary spirit alive.

Uber IPO: Cryptocurrency Will Be a ‘Huge Beneficiary’

Uber Technologies Inc. expects a valuation of about USD 100 billion when listed on the New York Stock Exchange. Large...