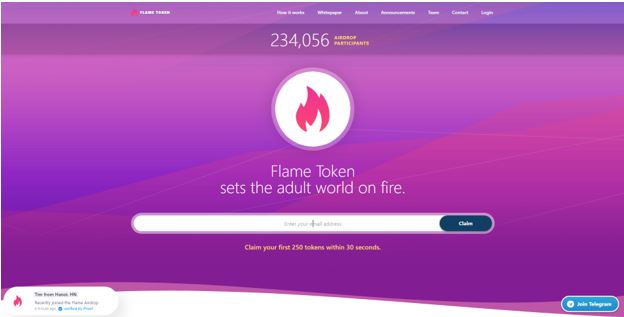 It appears that the likes of Initiative Q have a new rival in the Flame Token, which has amassed a whopping 230,000 participants in the first five days since launch. This is by far the fastest-growing airdrop in history and should it keep its current pace, it will surpass Initiative Q within 2 months. In this article, we will take a look at the strategy used by the Flame Token, to hopefully understand what drives so many people to participate in airdrops and what tricks companies are using to attract new users.

The token, released by a new social network for adults called “Sharesome”, has taken the airdrop world by storm since before the launch. It appears that the airdrop website was active up to 48 hours before the launch and the news got out presumably thanks to an insider. This helped Flame kickstart their launch with several tens of thousands of people ready to promote the airdrop. But this alone could not explain what happened afterwards. Upon closer inspection, behind the flashing success of the porn token there’s an impressive viral marketing engine including an over-generous referral system, a crazy watch app and a hot commercial.

What both Flame Token and Initiative Q have in common is the overwhelming focus on referrals. Initiative Q uses FOMO to get users to sign up. Once they sign up, users have to invite more people in order to unlock most of their coins. Since people have already committed by signing up, they are more likely to continue their commitment by sharing their referral link. This is called Sunken Cost Fallacy and it works very well. Flame Token uses rounds – every round the rewards halve, so people are pressed to join now. The original reward for signing up to Flame was 1,000 XFL (now 250 XFL) and the referral reward was 2,750 XFL, almost three times as much. The Flame team is therefore ready to pay up to three times as much for a referred user compared to a normal user who signed up by themselves.

With an irony that would seem inspired from https://www.reddit.com/r/nottheonion, the Flame project is riding on the release of an app that lets people mine XFL by pleasuring themselves. This is clearly news bait, but it appears to be working. Some of our colleagues have tested the iOS app and it indeed works and tokens are credited to your Flame Token account, but on iOS (not sure about Android) the app has to stay open on both your smartwatch and phone for the tokens to transfer, so we guess it only works if you use your laptop or another device for “inspiration”.

Perhaps the most unbelievable coincidence is the launch of the Flame Token just a couple of days before Tumblr announced that they are banning adult content from the site. Flame is made by the same people who made Sharesome.com, an adult-only social network, which is currently exploding thanks to the Tumblr announcement. The coincidence is big, so it’s only logical to ask if Sharesome and Flame were founded by Tumblr insiders. This would also explain the virality of the Flame Token and why all Tumblr users suddenly want to move to Sharesome. A quick search on Twitter for “Sharesome” shows users calling the social network “like Tumblr, but better”. In any case, it appears that we are assisting at the explosion of both a token and a social network and the two are powering each other.

Where do you think this is going? Is this just the beginning of a series of coins based on virality and if so, what’s the next viral coin?

Posted by Simone Tessori on thebitcoinnews.com

Blockchain enthusiast, in my free time I like reading cypherpunk email groups from the ‘80 and early ‘90s. I believe the next purpose of radio will be to as a means of broadcasting bitcoin transactions. I work from home, trading crypto.