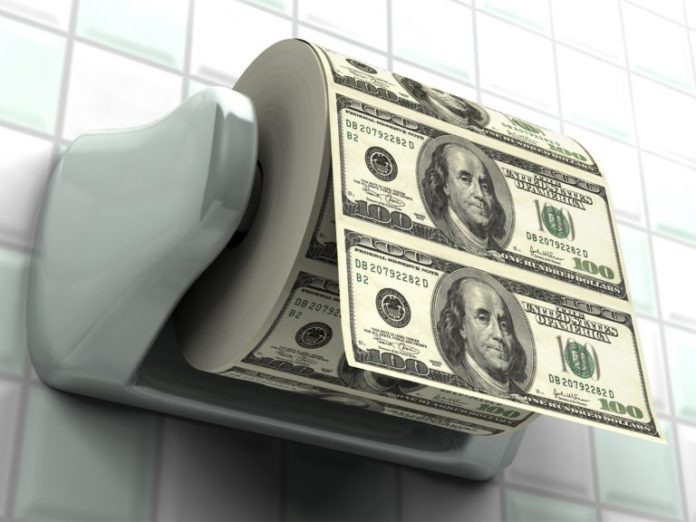 When quantitative easing (QE) was introduced, it was likened to a drug, with central banks making an emergency injection of money to resuscitate the global economy. Now it seems that some politicians have gotten addicted to this drug, going as far as to claim that government deficits don’t matter and the money printing can just continue unabated.

Also Read: Why Cryptocurrency Investors Are Renouncing Their US Citizenship

Central Banks Create Trillions Out of Thin Air With QE

Praet: As a central bank, we can create money to buy assets #AskECB https://t.co/zTQuU4y1ch

As if the central banks’ massive balance sheets were not enough cause for concern for the public whose wealth they endanger, some politicians are also now claiming that government deficits don’t matter. Under the newly touted Modern Monetary Theory (MMT), actions to counter deficits such as cutting spending or raising taxes are only needed when inflation is out of control. Two obvious problems with this reasoning are that first, it is like saying that jumping out the window is not dangerous until you hit the ground, and second, that governments can simply lie about inflation being low.

If politicians tell people that deficits don’t matter and we shouldn’t try to balance the books now, how will they be able to convince the public of the need for harsh measures when inflation bites to prevent it becoming unsustainable and spiraling into hyper-inflationary territory? In many countries, when the government or central bank refers to inflation, they only factor in some consumer goods and services, thus overlooking assets bubbles developing in fields such as stocks and real estate. In fact, for most people, buying a house is the biggest purchase of their lives so ignoring real estate when calculating inflation makes it irrelevant as a measure for the burden on the average person. This has already caused the emergence of a generation of young people who can’t buy a home in many developed markets around the world while inflation has officially been flat for years. Modern Monetary Theory takes the concept of fiat money to a logical extreme, describing currency as a public monopoly which the government is a price setter of and claiming that anything less than full unemployment is evidence that it is over-restricting the supply and needs to print more. Most leading economists reject the claims of MMT, including New Keynesian economists. Even Paul Krugman came out against it in 2011, admitting he wished he could agree with the theory but that “it’s just not right” and demonstrated how it can lead to hyperinflation. However, for politicians who wish to avoid taking unpopular austerity measures, the idea that governments should not worry about deficits because they can always print more money is just too seductive to pass up. The place where MMT is most heatedly debated right now is Japan, where, as noted above, the central bank’s balance sheet is already worth more than 100% on the country’s whole GDP due to QE. A strange mix of politicians, starting from the conservative side and stretching all the way to communist parties, are using the theory to justify their opposition to a sales tax hike needed to prevent a government deficit. The Japanese Finance Minister called this “extremely dangerous” and warned against Japan turning into a test site for MMT.

In the U.S., the theory is mainly gaining traction with the left wing of the Democrat party. For example, Stephanie Kelton, who is a leading contributor and advocate for MMT, served as an Economic Advisor to Bernie Sanders’ 2016 presidential campaign. “There is no budget crisis in Japan,” Kelton told WSJ. “And there is no inflation problem, so why would you risk slowing consumer spending—and thus the economy—with a hike in consumption tax?”

What do you think about the claims of Modern Monetary Theory? Share your thoughts in the comments section below.

Future Prospects of SO Project: All Are Linked by Tokens

The SO project from Silicon Valley has been very much heated recently. As the leading project of the next generation...