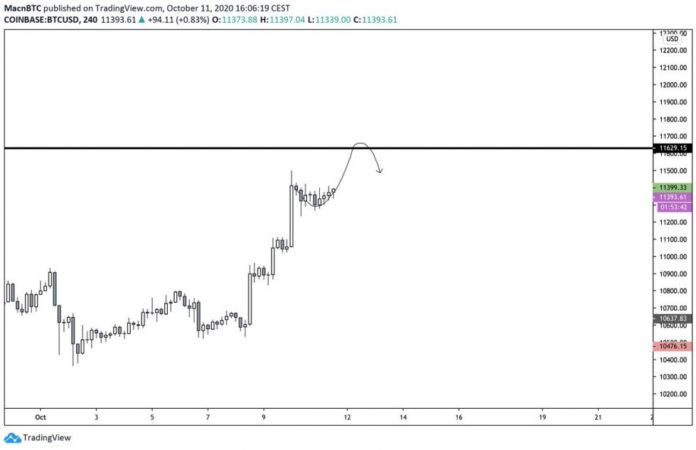 Bitcoin and the entire crypto market have been caught in the throes of a consolidation phase in the time following BTC’s surge from $10,600 to $11,400.

This move was significant and seemed to indicate a trend reversal working in favor of buyers.

BTC’s momentum has slowed, but this may mark bulls’ attempt to garner enough support to spark a continuation of this uptrend.

At the time of writing, Bitcoin is trading up over 1% at its current price of $11,410. This marks a notable surge from its daily lows of $11,200 that were set yesterday when bulls began losing their footing.

Bitcoin has remained strong despite bears attempting to thwart its uptrend. It is currently trading up nearly $1,000 from where it was just over a week ago.

This strength may extend further, as its ongoing consolidation phase does appear to be shifting the cryptocurrency’s trend and positioning it for further upside.

Analyst: BTC Could Break $14,000 if It Surmounts One Key Level

Despite Bitcoin’s slowing momentum as it hovers around $11,400, one analyst believes that it is on the cusp of potentially seeing significantly further gains in the days and weeks ahead.

He notes that it all depends on how BTC reacts to $11,600, a key near-term resistance level to observe.

Because this level sits less than 2% above where Bitcoin is currently trading, a test of it could be right around the corner.

$12M in ‘Satoshi Era’ Bitcoins Move: 21 Block Rewards from 2010 Spent After a Decade of Slumber