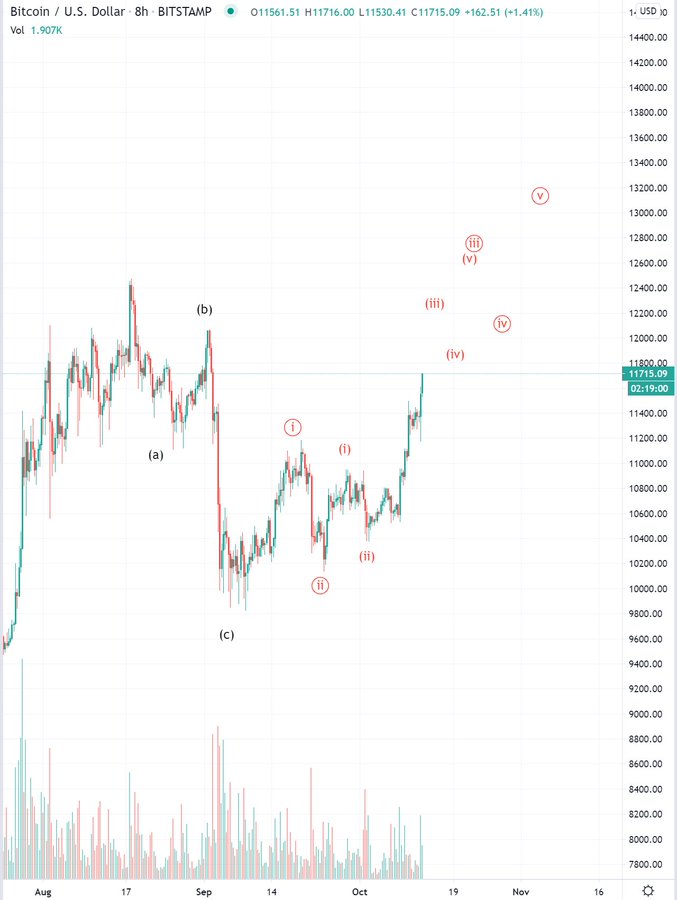 The Bitcoin trader that predicted the exact price the cryptocurrency would bottom in 2018 thinks that BTC has upside in the near term.

He recently shared the chart below, which shows that the cryptocurrency is forming an Elliot Wave breakout. This suggests that Bitcoin could soon move above $12,000, then toward new year-to-date highs closer to $13,000:

“the daily close on #btc looks like its going to be a monster. am slowly beginning to think this move up may actually be an impulse into a new high and not corrective. if this is the case eth likely the same and just lagging.”

Short-term news events have the potential to sully the outlook outlined by the analyst above.

Bitcoin has tumbled $300 in the past two hours after it was revealed that leading crypto-asset exchange OKEx had frozen all withdrawals. Other functions on the exchange have not been affected but the core withdrawal functionality has.

OKEx wrote that one of the private key holders is working with a public security/safety bureau. This means that they are unable to sign transactions for withdrawals, meaning they had to freeze the process of doing so.

“One of our private key holders is currently cooperating with a public security bureau in investigations where required. We have been out of touch with the concerned private key holder. As such, the associated authorization could not be completed.”

Bitcoin is dropping because some fear that this could result in increased regulation of the crypto-asset space. It’s worth noting, though, that no details were released regarding the premise of the holder’s collaboration with the government.

Other news events that threaten to send Bitcoin lower in the near term is the news around BitMEX being charged by the CFTC.

BitMEX is by far one of the most influential exchanges in the cryptocurrency space, hosting billions in volume. Any bearish developments in this case could drive Bitcoin lower as investors rush to safety.

Ethereum has dropped dramatically since the August highs of $490. The coin now trades for $370, around 25% below those...