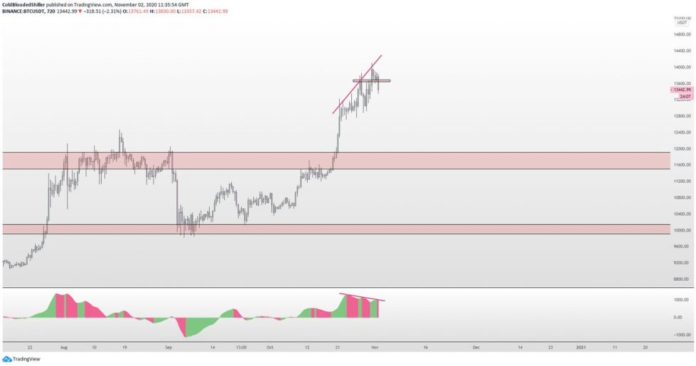 Bitcoin and the rest of the cryptocurrency market have been caught within the throes of a sideways trading bout throughout the past few days and weeks, with buyers and sellers unable to control its mid-term trend.

Last week, the cryptocurrency was able to rally as high as $14,100, but the selling pressure here was rather intense and instantly forced it back below $13,800.

Despite closing its monthly candle above this level, it has been facing some intense inflows of selling pressure throughout the past few hours.

One analyst believes that this will mark the start of a decline that ultimately sends it reeling as low as $11,500.

Bitcoin Struggles to Gain Momentum as Sellers Force It Lower

Where the crypto trends in the near-term will depend on how it responds to the support just below where it is currently trading at.

One trader is now offering a grim outlook for the crypto, noting that a move to $11,500 may come about in the near-term before Bitcoin can gain any long-term support that sends it higher.

Unless it sees a sharp rebound in the near-term that erases its recent losses, there’s a strong possibility that further downside is imminent for Bitcoin.