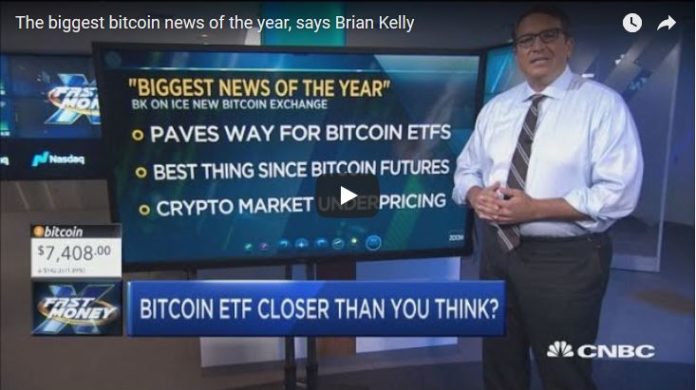 Hedge fund manager Brian Kelly, who is responsible for market analysis on CNBC’s Fast Money, has described the Intercontinental Exchange’s announcement of the launch of the new Bakkt platform as the “Biggest News of the Year for Bitcoin”.

As the Intercontinental Exchange (ICE), the parent company of the New York Stock Exchange (NYSE), recently announced, the company will launch a new digital assets platform called “Bakkt” with the support of technology partner Microsoft. The new platform will enable consumers and institutions to buy, sell and spend digital assets such as Bitcoin (BTC) in a global network.

In addition, the company plans to offer Bitcoin futures with physical delivery as of November of this year. Kelly sees this step as a potential game changer. As late as last week, he said he did not think a Bitcoin ETF would be approved by the US Securities and Exchange Commission (SEC) this year.

Indeed, the Winklevoss Bitcoin ETF was rejected a few days later by the SEC for the second time. One of the reasons for this was that there is no regulated market for Bitcoin in the USA. With Bakkt, however, this shortcoming would not exist anymore, which, according to Kelly, greatly increases the chance of obtaining a Bitcoin ETF.

Finally, Kelly was asked why Bitcoin, despite this excellent news, had not risen in price. He answered:

“In January, Bitcoin would have gone up 20% after the news. So I think the bear market has just broken people’s mind […] The market is still digesting that and reminds you that most of Bitcoin trading is in Asia. The news was posted this morning at 8:30 am, which is 9:30 am on a Friday in Asia. [When] Asia wakes up, you might see that this thing is coming up. “

Kelly repeatedly repeated that this news is “very significant”. But a look at the Bitcoin chart shows that the hoped-for reaction so far failed. Instead, just about all crypto currencies are losing value. According to Live Coin Watch, Bitcoin has dropped more than 6 percent in the last 24 hours and is currently trading at $ 7,040.