While many of our readers of Global Coin Report focus their interests on the numerous Altcoins (and for good reason) for both informative and technical perspectives with regards to what is transpiring throughout the vast and diverse cryptocurrency universe, there are times when it appears that the entire crypto landscape is awaiting direction from the ‘Big 3’ as to which way, either North or South, the winds may blow.

As a technician, whom monitors/watches the tics and flicks of the tape with a close eye, there are times when it certainly seems apparent that the entire marketplace is awaiting the directional moves of a limited/small, yet very important select group of names for further revealing of the cards from the deck in order to garner an edge.

Such market conditions appear to be taking shape at present with both investors/traders keeping a close eye on the action of a few of the larger market-cap names as all three (3) continue to trade at or near key inflection points, while flirting with important potential support levels.

With that said, let’s take a look at the technical picture of those three (3) names, BTC; ETH and LTC, whom we feel are causing/creating the indecision with present marketplace conditions as all three (3) find themselves in the zone dancing at their potential support levels. 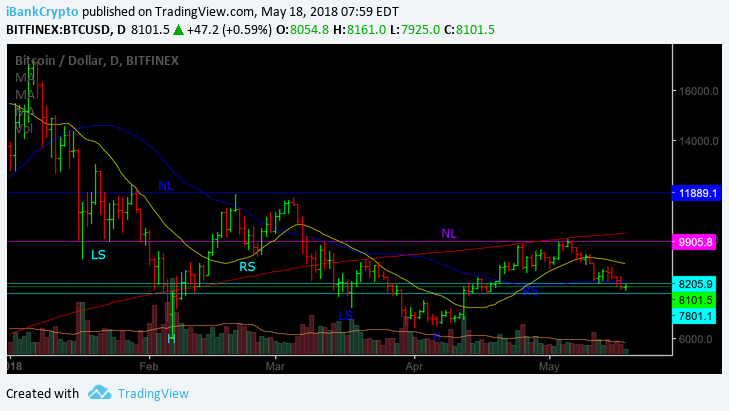 As we can observe above, in 1Q18 BTC attempted and failed to come out of its inverted H&S pattern as it was rejected at the neckline (dark blue horizontal line) and subsequently proceeded to lower depths.

Fast forward to today, and we once again have witnessed BTC attempting to come up and out of yet another inverted H&S pattern and while the move was rejected yet again at the neckline (purple horizontal line) on its first attempt, BTC now finds itself dancing with important support at the 8200 level.

While the recent move ‘appears’ to be yet another failure, we believe that it’s premature to declare such outcome as of now.

Thus, both investors traders may want to pay close attention to the action in BTC in the days ahead.

If BTC is unable to recapture the 8200 level and stick, and perhaps more importantly, provide ‘Follow-Through’, we may witness additional slippage to the next area of potential support found at the 7800 level.

Therefore, while BTC continues to flirt with its potential support, both investors/traders may want to utilize the 8200 and 7800 levels as reference points moving forward. 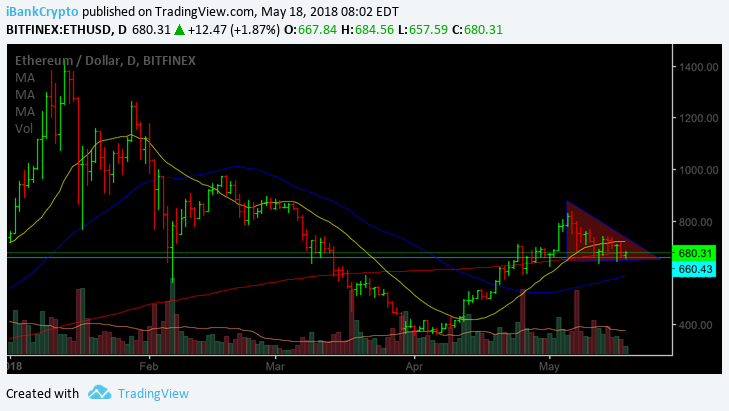 Looking at the daily chart of Ethereum (ETH) above, we can observe that ETH presently finds itself trading within a triangle pattern (shaded area) awaiting resolution.

As time (days) passes, the action within the triangle pattern tightens, whereby its resolution will render a verdict.

Therefore, both investors/traders may want to pay particular attention to the action in ETH moving forward, as we suspect that a move, either North or South out of the pattern, is imminent. 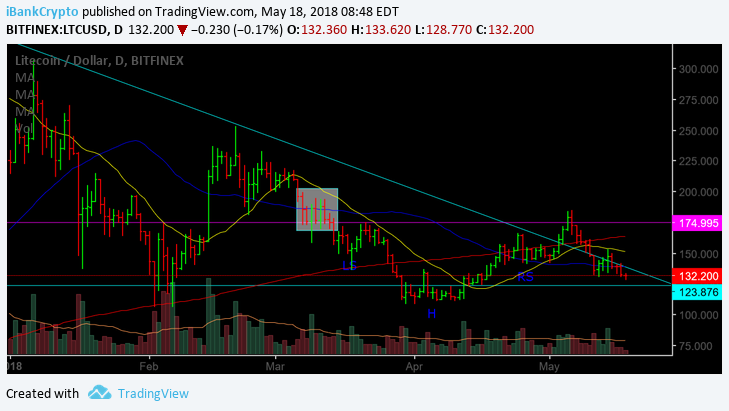 Much like BTC, Litecoin (above) found itself developing an inverted H&S pattern and while LTC was able to go ‘top-side’ of its neckline (dark purple horizontal line), it was unable to hold and quickly retraced beneath and has since found itself sliding the slippery slope south over the course of the past two (2) weeks.

Thus, moving forward, both investors/traders may want to utilize the 124 potential support level for further clues should LTC make its way there. On the flip-side, should LTC be capable of recapturing the 140-142 zone (former support) and perhaps, more importantly, the 153 figure, such development, should it materialize, would go a long way in righting the ship.

Nonetheless, the overall cryptocurrency universe remains in indecision with respect to direction and it is our contention that the marketplace is awaiting resolution of the ‘Big 3’ to play-out before the remainder of the space follows their lead.