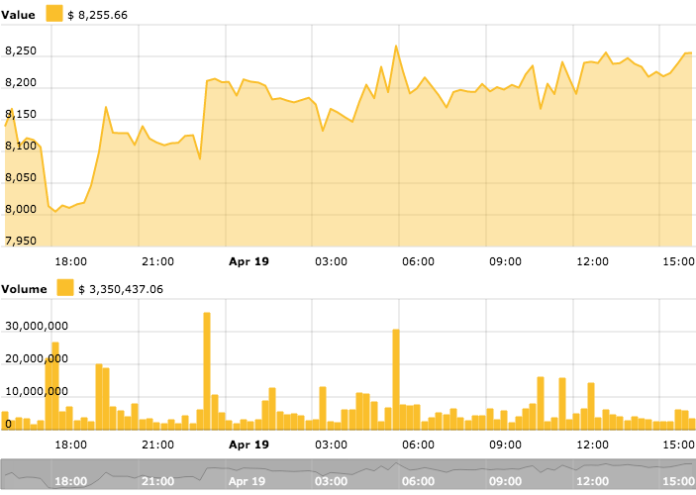 Bitcoin prices are holding steady today, April 19, one week after a surprise surge took the cryptocurrency up $1,000 to reach above $8,000 in the space of 30 minutes.

Capping a week of more moderate fluctuations around the $8,000 mark, commentators note support appears firm around $7,900, paving the way for further upside in the coming weeks.

“If we can get into an area of $8,600, it’s very possible that the price would be exhausted,” he told viewers on the latest edition of his podcast April 18.

Just weeks ago, Bitcoin was trading below $7,000 and a return to that zone could well occur in the event prices escalated too quickly towards $9,000, Vays said.

Calling time on the period of downward trends since December were venture capitalist Tim Draper and CNBC economist Brian Kelly last week, while this week a quarterly outlook from Saxobank continued the positive crypto market sentiment for 2018.

In altcoin markets meanwhile, progress has been broadly in line with Bitcoin’s behavior. Two exceptions to the rule have come in the form of Basic Attention Token (BAT), which gained almost 50 percent on the day following a partnership announcement between the coin’s Brave platform and the Dow Jones Media Group. BAT is currently trading around $0.36, up about 22 percent on the day to press time.

Bitcoin is not a tool for criminal activity

An oft-cited reason for future regulation of Bitcoin and other cryptocurrencies is the potential for criminal activity, such as money...