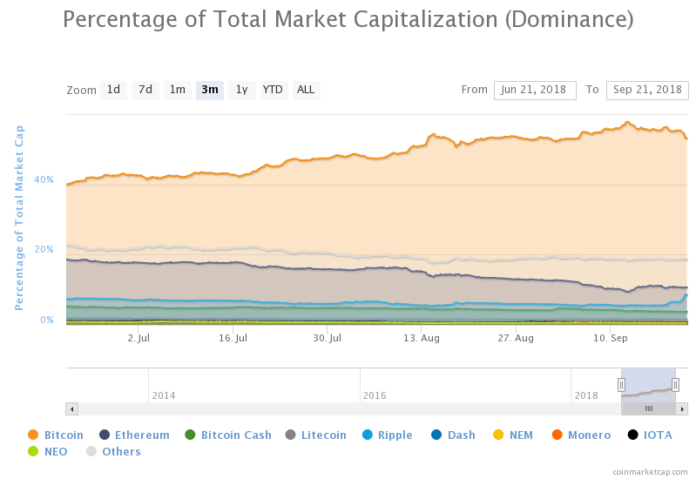 Bitcoin market dominance is a recurring theme in analytics. Recently this measure reached a new three-month high – what does that mean for investors and why is that?

Bitcoin had to reduce its market share from 85% to 37% through Ethereum between February and June last year. Ethereum scored at that time by an ICO boom, which attracted many investors and put Bitcoin in the shade in the short term. Nonetheless, Bitcoin’s value increased at the same time. Thus, a price does not necessarily move linearly with its corresponding market share.

And despite promising alternatives, the competitors Bitcoin not run the lead. Especially for newcomers Bitcoin is an “entry-level coin”, which leads only later in the research to the fact that one deals only later with Altcoins. In addition, virtually every stock exchange has Bitcoin listed and offers it as a primary medium of exchange – so it is everywhere in the crypto scene in use.

The Internet search seems to confirm that Bitcoin attracts new users here. Although the search queries since January together with the price have fallen rapidly, but the search term “Bitcoin” is five times higher than the search term “crypto currencies”.

Even for many experts, Bitcoin still seems to be a solid choice, also because of its high market capital. The current Bitcoin market capital is around $ 115 billion and seems to be stabilizing right now. In the last three months, the market dominance gained despite unstable and sometimes weak prices.

Although the total cryptocurrency market has plunged from $ 340 billion to $ 217 billion since the beginning of June, Bitcoin’s power is growing in the marketplace. This 36 percent drop was fierce for the entire market, but Bitcoin showed up once While Bitcoin defends his post, comparisons with tulip inflation are currently underway again – a comparison that seldom comes from the crypto scene itself.