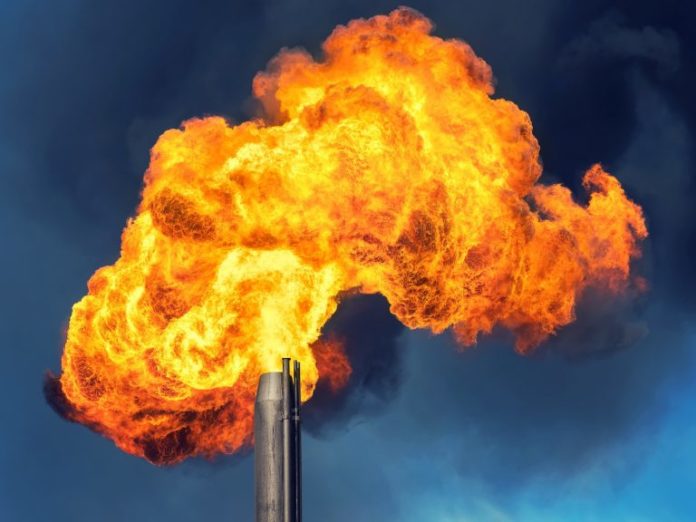 Natural gas acquired as a byproduct of oil extraction has become synonymous with wasted energy. In certain areas, drilling companies are unable to find a profitable market for the excess fuel. It’s often vented into the atmosphere. Startups are now offering on-site systems that utilize the surplus to mine cryptocurrencies. This new business is growing in regions where shale oil and gas extraction are major industries.

Also read: Georgia Exempts Bitcoin From VAT to Become the Next Country to Affirm Its Currency Status

At least for the foreseeable future, traditional energy sources such as oil and gas are here to stay. Their abundance and relatively low price compared to some renewables, their utility, mobility and well developed supporting infrastructure are hard to beat. However, despite these obvious advantages, getting them out of the ground can sometimes be a wasteful process. Electricity is the primary cost of bitcoin mining and while coin minting is often powered by renewables like hydro, energy from traditional sources is widely used as well. Cryptocurrency mining can utilize the surplus fuel that would otherwise be wasted, and the oil and gas industry is a good example of this. With the spread of alternative methods of extraction to even remote, hard-to-access places, the need for on-site consumers grows.

New shale oil wells have been popping up across North America and other parts of the world in the past few years. They are often located far from potential markets, and the transportation of certain byproducts such as methane and other compounds forming natural gas is not always economically viable, because grid prices are too low or because expensive additional infrastructure is needed to transport the fuel.

Associated gas, or flare gas, is a liability for oil companies and they have several options for dealing with it. If a well is close to a market, producers can pipe it to end consumers. Alternatively, they can flare it or vent it into the atmosphere. However, authorities in the U.S. and Canada impose restrictions on the amount of gas that can be released or burned. Exceeding these limits usually leads to costly production stoppages.

Installing bitcoin mining equipment at oil production sites provides a solution to these problems. Some companies are already offering this type of service. Gas engines are used to generate electricity and power mining rigs. Oil producers remain compliant with venting quotas and receive additional income, while ensuring uninterrupted oil extraction. Mining rewards can be significantly higher than the price most companies get when they sell gas to the grid. At the same time, nature is spared from a very potent greenhouse gas – methane gas is 25 times more harmful than CO2.

Upstream Data is a Canadian company offering mobile mining datacenters that can be bought or rented by oil companies and installed at facilities which need to vent associated gas. They can bring in over 15 times more revenue than the market price of the fuel, while limiting carbon footprint. The datacenters come in different configurations depending on their equipment and power rating. The all-in-one Ohmm Combo can be ordered with up to 125 kW of ASICs and a natural gas genset, all housed in a modified shipping container. The midrange version starts at 28,000 Canadian dollars ($21,400). A new product called Ohmm Mini, a 50 kW stackable datacenter, is also on sale, and Ohmm Mega, a 1,000 kW datacenter, is currently under development. Upstream Data founder and CEO Stephen Barbour, who is a mechanical engineer with eight years of experience in the oil industry, told news.Bitcoin.com that his business continues to pick up. Earlier this month, he tweeted about the commissioning of a new Ohmm datacenter in Texas. The entrepreneur noted that media reports on his solutions have brought more legitimacy to crypto mining as a means of utilizing stranded gas. His company continues to get new orders and is conducting trials with small and large groups. “A lot of great things are happening for us so we’re pretty excited to expand our services,” Barbour said and added:

Aside from the oil industry, our datacenters can also be used in traditional mining applications. However, I believe the future of bitcoin mining is in the oil and gas industry due to the enormity of the energy produced and wasted.

Various studies have shown that oil companies vent or flare enormous quantities of natural gas year after year. According to the World Bank, 5.3 trillion cubic feet (150 billion cubic meters) of natural gas is flared annually, which amounts to 25% of the total consumption in the United States. An analysis conducted by General Electric claims that 5% of the global gas production is flared annually. It has been estimated that the stranded natural gas accounts for up to 60% of the planet’s reserves.

EZ Blockchain is another company expanding its operations in the sector. It has designed a mobile flare mitigation system which can be deployed on oil well pads and mine digital coins using energy from the flared gas. Its EZ Smartbox portable mining units are powered by gas-electric generators to convert associated gas into electricity used in data processing including crypto mining. The Chicago-based company has already delivered 13 mobile units to three locations, with 6 MWs under operation and 64 PH/s of hash power. To find out more about these operations and get further insights about the industry, news.Bitcoin.com contacted Sergii Gerasymovych, founder of EZ Blockchain.

“Our primary area of operation and target market is the Bakken region in North Dakota, which has very rich gas being flared, with over 1,500 BTU/ft3. Raw gas is dirty, it consists of methane, butane, hexane, pentane, ethane, and other gases. NGL companies are required by law to clean it before it can be burned and producers spend money to do that,” the entrepreneur explained.

In the smallest configuration of the EZ Smartgrid solution, a 350 kW datacenter can be equipped with 250 S9 miners and utilize up to 100 MCF of gas daily with a gas-electric generator. “This is a drop in the ocean for oil producers, but we worked hard to solve the scaling problem. We strategically partnered with a distributor of generators from Jenbacher with a power range of 200 kW to 10 MW and flexibility to run either on natural gas or a number of other gases,” Gerasymovych noted. He thinks this is a game changer as the average small well in North Dakota produces around 350 MCF of gas daily, and an oil pad can have five or more wells.

The company is currently working with one oil producer in the Bakken region and is about to start operations with another. Its team is also evaluating a 10 MW location in the Appalachian Basin. EZ Blockchain’s founder believes there’s huge opportunity for the expansion of this type of crypto mining, particularly in North America where due to the shale boom, there are many wells where gas is flared. This fuel isn’t going anywhere and building pipes is not economically feasible.

There is enough wasted gas in North Dakota alone to power a third of Bitcoin’s whole network. Bitcoin mining can be done completely off-grid, solving an environmental problem.

Sergii Gerasymovych expects more drilling companies to install and operate on-site mining equipment to utilize the excess gas that would otherwise be wasted. However, this will not happen quickly as the oil and gas industry is very conservative. It’s going to take time for small to midsize companies to look for a new, innovative approach. “They are in the business of pumping oil, not mining bitcoin. That’s why EZ Blockchain usually runs the mining operations,” he remarked.

Gerasymovych emphasized that these operations generally require a lot of investment into gas generation equipment upfront. “This is another obstacle we face with oil producers. Small companies can operate tens of wells and midsize companies – hundreds or even thousands. That means very big mining operations have to be built and funded in order for the flaring problem to go away completely,” he explained. Oil and gas companies are a bit hesitant to invest money in an industry which they do not know well and it may take more time before the technology becomes a mainstream solution. The expansion of the shale oil industry in North America and the scale of gas wastage have created ideal conditions for services such as those offered by Upstream Data and EZ Blockchain, and they are not the only companies that are working to utilize the abundant byproduct in crypto mining applications. The U.S.-based Crusoe Energy Systems is developing its own solutions in the niche, helping oil and gas producers to reduce gas flaring while making a profit by verifying crypto transactions. This spring, the startup raised $4.5 million in a seed funding round led by Bain Capital Ventures and Founders Fund Pathfinder, bringing its total funding to $5.1 million.

The capital will be used to finance the production of Crusoe’s mobile datacenters designed to mine digital coins at oil drilling sites. The goal is to provide a large-scale flare mitigation service for oil and gas extraction companies across North America. Crusoe’s modular datacenter units are installed in shipping containers and can be quickly deployed on any oil well site in the U.S. and Canada to start mining within days. The systems not only reduce flaring but also eliminate most of the smog-forming emissions of volatile compounds such as nitrogen oxide (NOx) and carbon monoxide (CO).

While cryptocurrency mining has become more and more centralized over the years, there’s a strong case that the generation of power used in the process will be gradually decentralizing, thanks to solutions like these. Datacenters running on stranded gas do mine on pools, but they are mobile units that can be installed anywhere. As the hunt for cheap energy intensifies, with electricity being the main expense in bitcoin mining, more and more businesses are likely to develop products allowing for the use of energy close to its source.

Companies specializing in flare gas utilization have some challenges to overcome. Datacenters require maintenance, rigs need to be restarted sometimes, fuel pipes can freeze, and it can be hard to establish a reliable internet connection in remote places. Add to that the low efficiency of gas engines used to power the mining modules – it’s less than 30% and most of the energy is still lost as heat and through the exhaust pipe. Bans imposed on shale oil and gas extraction and fracking also pose a threat to the business. Nevertheless, bitcoin mining remains a viable option for energy companies operating far from potential markets and under strict regulations on venting and flaring. Mining containers can also be installed at ordinary natural gas fields and exploited whenever coin minting is more profitable than selling the fuel to other consumers. Along with Canada and the U.S., Russia, China, Iran, and Saudi Arabia are among the largest natural gas producers in the world. Global proven reserves have been estimated at 6.95 quadrillion cubic feet.

Do you expect to see a rapid development of other crypto mining technologies utilizing excess or wasted fossil fuels? Share your thoughts on the subject in the comments section below.

China has officially recognized Bitcoin as a valid phenomenon for a second time after a court determined it is “virtual...