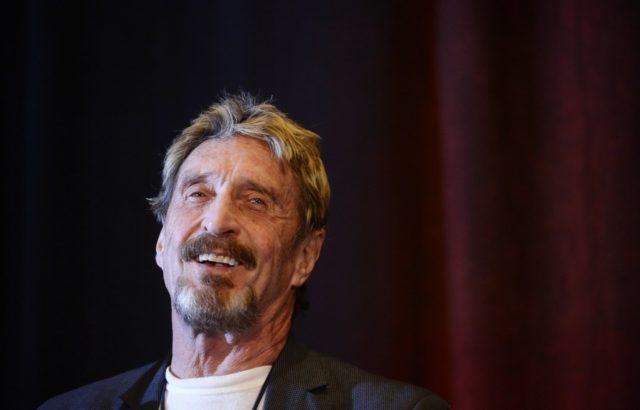 Bitcoin advocate and US 2020 Presidential Candidate John McAfee walked free from detention July 24 after his arrest in the Dominican Republic.

McAfee: ‘I Was Well Treated’

Writing on Twitter, McAfee’s Presidential campaign manager said that the entrepreneur would move to an unspecified location, whereupon he would update followers.

McAfee, his wife, and several others have lived on a boat and traveled around the Caribbean in recent months, reportedly in order to escape US law enforcement, by which he is wanted on charges relating to tax evasion.

“I have spoken with John over the phone and can confirm their safe release,”  Rob Benedicto Pacifico Juan Maria Loggia-Ramirez wrote on Twitter.

“They are underway to a new location but have been forced to leave The Freedom Boat for now. John will be assuming control of this account again after travel.”

“Leaving detention (don’t judge my looks – four days of confinement). I was well treated. My superiors were friendly and helpful. In spite of the helpful circumstances, we’ve decided to move on.”

Leaving detention (don’t judge my looks – four days of confinement). I was well treated. My superiors were friendly and helpful. In spite of the helpful circumstances, we’ve decided to move on. More later. pic.twitter.com/V4539uYCHR

The group reportedly encountered difficulties after posting a photo from the boat featuring firearms. Armed forces then arrested them upon their arrival in the Dominican Republic, with McAfee spending four days in confinement.

The events mark the latest drama in a long debacle involving McAfee, which has included controversy over an “unhackable” Bitcoin wallet he endorsed last year and more recently a spat with proponents of altcoin Bitcoin SV.

As Bitcoinist reported, McAfee was forced to withdraw claims the BitFi wallet was unbreachable after a developer demonstrated proof he had circumvented its security.

Bitcoin SV supporter Calvin Ayre meanwhile publicly called him a “moron” in April after his allegations that self-proclaimed ‘creator’ of Bitcoin Craig Wright was a “fraud.”

McAfee is running on a largely anti-establishment platform in 2020, his official website stating “freedom for the people” forms his main priority.

“So do not ask me about immigration, foreign relations, education, etc. I have no idea,” it states. “Those claiming that they do are lying to themselves, or if not, they are purposely lying to you. We must first be free. Freedom for The People is my only goal.”

Bitcoin donations naturally form a feature of the campaign, while other hopefuls, such as Andrew Yang, have also embraced cryptocurrency as an election play.

What do you think about John McAfee’s release? Let us know in the comments below!