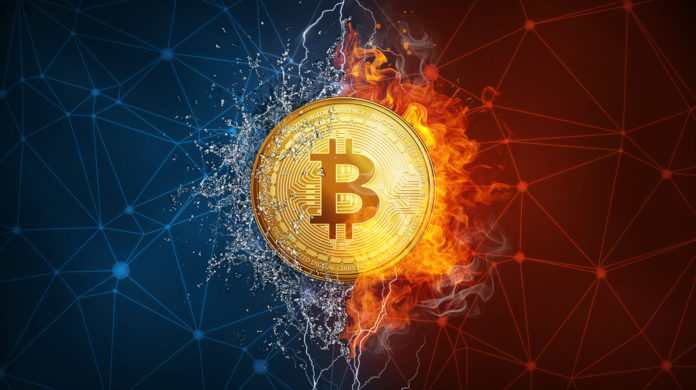 The price of bitcoin hit an all-time high in mid-December 2017, where the price was roughly around $20,000. This price attracted the attention from many people: from institutional investors all the way to people who were just starting to wonder how Blockchain works. However, shortly after this time, the price of Bitcoin fell dramatically. In fact, between mid-December 2017 and early February 2018, Bitcoin lost roughly 70% of its value.

Since the early February low price of about $6,000, the Bitcoin price has been bouncing around between roughly $7,000 to $11,000. However, in the past 2 to 3 weeks, the price has been struggling to remain above $9,000. It has breached his level several times, but has failed to remain consistently higher than it.

On March 18, Bitcoin dropped all the way down to roughly $7,500. But, by March 20th, the price rebounded back over $9,000, bringing hope to Bitcoin bulls everywhere. However, the price of Bitcoin did not remain over $9,000 for long. In fact, it dipped beneath this level on March 21, the next day. It briefly jumped back above $9,000 before dropping well below it on March 22nd. The price of Bitcoin is currently roughly $8,644.

Cause of the winter price retreats

In late fall, and early winter of 2017, the price of Bitcoin was pushed up rapidly in anticipation of Bitcoin futures launches by the CME and the CBOE. However, as 2018 began, a series of regulatory fears erupted as nations such as South Korea and the United States started discussing a desire to further regulate cryptocurrencies.

The price of Bitcoin was also affected by the massive sell orders given by the Mt. Gox trustee, Nabuaki Kobayashi. Over the past few months, Kobayashi sold roughly 35,000 Bitcoins which were worth about $400 million total. These sales were made to help pay off the Mt. Gox creditors. The Mt. Gox bankruptcy lawsuit is ongoing, and the Bitcoin sales made by Kobayashi are a part of the proceedings. So, Bitcoin has faced a number of distinct challenges in the past few months.

Where will Bitcoin go next?

Kobayashi has temporarily stopped selling massive amounts of bitcoin, so it is logical to assume that this can be positive for the price of Bitcoin. However, regulatory concerns continue to be a distinct threat for the king of cryptocurrencies. In fact, World economic leaders recently called for crypto currency regulation recommendations at the G 20 summit in Buenos Aires, Argentina.

Further, the Securities and Exchange commission in the United States also recently issued a statement which said that it would be regulating cryptocurrency exchanges more heavily, and that any exchange offering ICOs will have to register with it.

The past five months have been filled with extreme amounts of volatility for Bitcoin. The top cryptocurrency by market cap has faced incredible price run ups and dramatic sell offs during this time. However, despite the volatility, Bitcoin has still roughly tripled in value since last summer, when it was only worth about $3,000.

So, it appears that even when faced with massive volatility, Bitcoin is capable of generating long-term gains. This news is positive for everyone who is invested in Bitcoin or who wants to see it succeed. Bitcoin’s long-term track record is not a definitive indication that it will be worth more in the future. However, it is certainly a good sign.

If Bitcoin is going return to its December highs of around $20,000, then it is going to have to overcome a lot of regulatory challenges. Importantly, most of the regulatory changes that are being put forth or implemented do not outlaw Bitcoin or Bitcoin exchanges, but rather, are measures designed to prevent fraud. So, most of these regulations are unlikely to threaten the long-term health of the top cryptocurrency. This could be positive for Bitcoin’s future.