Bitmain subsidiary BTC.com is now offering its wallet users discounted priority transactions. Though currently still a beta feature, this will let BTC.com users pay some 94 percent less in fees for three transactions each month to have them confirm faster. The funds allocated toward the discounted transaction fees will be “subsidized by the BTC.com Wallet.”

The new service comes at a time when transaction fees on the Bitcoin network are reaching all-time highs.

“The effect of rising tx costs mostly affects the perception of bitcoin to new users. They might think it’s too expensive or might use a low tx fee and have their bitcoin transaction confirm in a very long time. Both scenarios are not good for adoption.”

BTC.com is currently the only bitcoin wallet that also serves as a fully operational mining pool, currently controlling approximately 7 percent of hash power on the Bitcoin network. 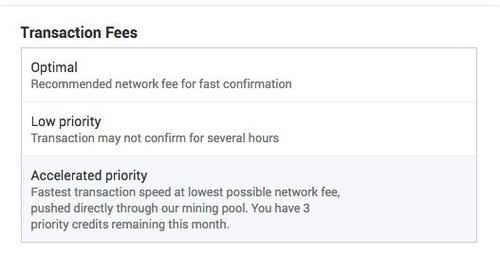 The Bitcoin community has been embroiled in arguments over the best solution to scale the network for years now. Perhaps the most popular solution is Segregated Witness, a soft fork protocol upgrade proposed by the Bitcoin Core development team. Bitmain in particular has explicitly stated their refusal to implement SegWit if it’s not combined with a hard fork increase of the block size limit, and its pools — which include the BTC.com mining pool — have enough signaling power to block SegWit’s activation.

As for solutions to the scalability issue, “BTC.com is supporting Segwit2x.” Segwit2x is a hybrid of the solutions proposed above: It implements SegWit followed six months later by a hard fork increase in the block size limit from 1 to 2 MB.

If the Bitcoin community is unable to agree on a solution to the scalability issue, the growth potential of the network limits its application. “We need to work together and stop bickering,” says De La Torre, “There are some good scaling options on the table.”

The 21 Million Project offers the first ever opportunity for fans of Action Drama TV to get involved in the...