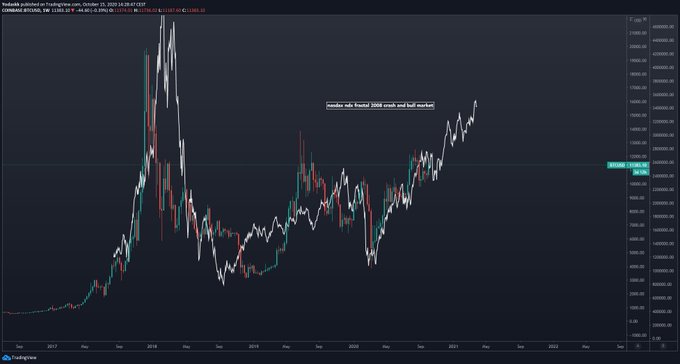 According to a fractal analysis that compared the Nasdaq from the early-2000s to the mid-2010s to Bitcoin, the cryptocurrency is primed to continue its ascent in the weeks ahead.

As can be seen in the fractal comparison below, the cryptocurrency has looked almost identical to the Nasdaq after the 2008 Great Recession. Should Bitcoin continue to follow the path that the Nasdaq took after 2008, it will soon see a strong leg higher towards $15,000, the fractal analysis indicates.

The analyst that shared this fractal is the same one that predicted at the end of August that Bitcoin would see a decline to the high-$9,000s. He was proven correct just days later when the cryptocurrency plunged from its highs above $12,000 to $9,800 in a dramatic fashion. This same analyst has also been accurate in the past, calling the reversal from the $5,000-6,000 region to above $10,000, where the crypto-asset trades now.

Fundamentals Suggest Upside Is In the Works

The fundamental trends also suggest that Bitcoin is likely to continue its ascent in the days ahead. Raoul Pal, CEO of Real Vision, recently stated that with the Federal Reserve primed to do anything to stop deflation, BTC is primed to depreciate as fiat is devalued en-masse.

He said in a recent interview that he thinks the crypto-asset will reach $1,000,000 in the coming years due to these macro trends.