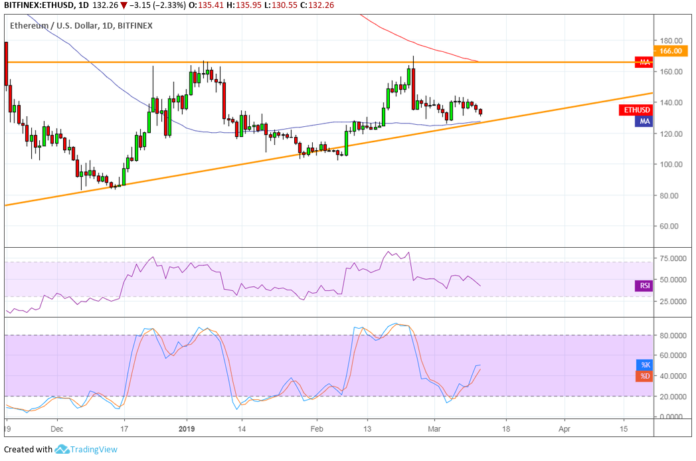 Ethereum is still trading inside its long-term ascending triangle visible on the daily time frame and is currently testing support. A bounce could take it back to the triangle resistance at $165.

However, the 100 SMA is below the longer-term 200 SMA to indicate that the path of least resistance is to the downside. In other words, support is more likely to break than to hold. Still, the 100 SMA lines up with the triangle bottom to add to its strength as a floor. Also, the gap between the moving averages is narrowing to indicate weakening selling pressure.

RSI is heading lower to signal that bearish momentum is in play and could stay on until oversold conditions are seen. This oscillator is just crossing the center line, so there’s plenty of room to head south and price might follow suit. A break below the triangle bottom around $140 could spur a drop that’s the same height as the triangle, which spans $80 to $165.

Stochastic, on the other hand, is pointing up after recently dipping into the oversold region. This suggests that buyers are ready to return in full force to defend the floor. A break past the triangle top could similarly spur a rally that’s the same height as the chart formation.

News that a sender accidentally an unusually high miners’ fee has raised some concerns as this scenario would need to be avoided in the future. The good news is that mining pool Sparkpool has located and verified the sender, who agreed to split the amount.

According to CoinDesk, Sparkpool said it received an email from an anonymous user on Feb. 25, claiming that they had made a mistake by attaching the 2,100 ether fee on Feb. 19. The pool asked that a token amount of 0.022517 ETH be sent using the same 0x587 address to the pool’s address.

“Thank you SparkPool and your miners for helping us to recover our loss, we are willing to share half of 2,100 ETH with the miners to thanks the miners’ integrity.”