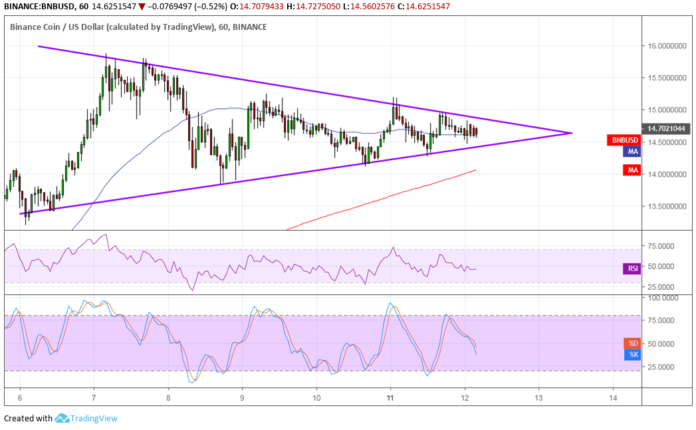 Binance Coin has formed lower highs and higher lows to create a symmetrical triangle pattern on its 1-hour chart. Price is approaching the peak of the formation to signal that a breakout is due soon.

The 100 SMA is above the longer-term 200 SMA to indicate that the path of least resistance is to the upside. In other words, resistance is more likely to break than to hold. If that happens, Binance Coin could climb by the same height as the triangle, which spans 13.500 to 15.750. The 100 SMA is currently holding as dynamic support also, but the gap between the moving averages is narrowing to reflect weakening bullish momentum.

RSI is heading south to show that sellers have the upper hand and could continue to stay in control until oversold conditions are seen. The oscillator is just crossing the center line, so there’s plenty of room to head south and Binance Coin might follow suit.

Stochastic is also on the move down to confirm the presence of selling pressure. This oscillator has a bit of ground to cover before indicating oversold conditions as well. Price might still find some support at the 200 SMA dynamic inflection point in the event of a break lower, though.

Binance Coin drew a lot of interest on its launch platform for tokens and the promise of incentives to holders to drum up anticipation for its decentralized exchange. However, traders might be holding out for more updates or actual developments before taking this coin any higher.

Still, it’s worth noting that BNB has been able to hold on to most of its recent gains even while other coins are being bogged down by profit-taking and retracements. More progress on the DEX or another successful token launch could bring more upside momentum for Binance Coin.