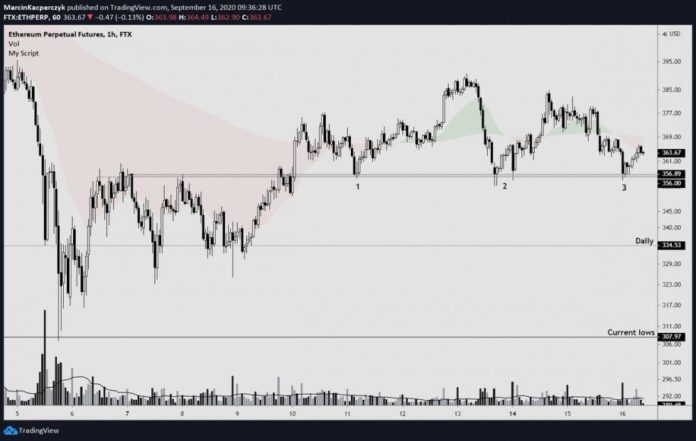 Ethereum has been struggling to keep up with Bitcoin in recent days, with its price being dragged lower by the headwinds created by the ongoing descent of the DeFi market sector.

This weakness led it as low as the $350 overnight, which is the point at which bulls finally stepped up and began guarding against it seeing posting losses.

Analysts now are stating that the cryptocurrency could be well-positioned to see upside, but only if it can continue defending a last-ditch support level.

A break below this level, however, would be dire and potentially cause the crypto to see a massive move lower.

At the time of writing, Ethereum is trading up just over 1% at its currency price of $368. This marks a notable upswing from daily lows of $356, but a slight decline from highs within the lower-$370 region.

ETH has been seeing some turbulence as of late, which has primarily come about due to moves seen within the DeFi sector.

At the present moment, DeFi-related tokens are struggling, which is creating headwinds for Ethereum.

There’s a possibility that they will continue hampering its upside potential in the near-term.

Analyst: ETH Must Defend This Key Support, or Face Risk of Major Losses

One analyst said in a recent tweet that $356 is the “line in the sand” that must be defended, or else massive downside could be imminent.

As such, how it trends in the coming days could be vital for its macro strength.

“ETH fighting for its life while BTC grinds up due to ETH/BTC looking like crap. 356$ is the line in the sand – bull above, close below and we FUD Vitalik and fees again. Pretty bad spot to be overexposed to alts,” he said.

How DeFi tokens trend in the near-term may be one of the deciding factors that influence Ethereum’s outlook.