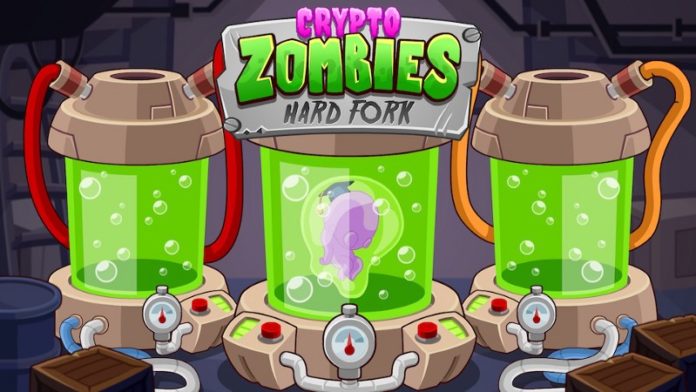 With the DAppChains from Loom Ethereum gets the first sidechains. These are supposed to scale better blockchain-based games and social media than the mainchain of Ethereum ever could. But the DAppChains sacrifice decentralization …

At first glance, DelegateCall looks like StackExchange, StackOverflow or gutefrage.de: Like one of the typical platforms where some ask questions and others answer them. Like all these platforms, one earns oneself on DelegateCall’s “Karma” when one has given answers that others have found helpful.

Unlike the usual platforms, however, one can buy something with the karma on DelegateCall. Because every karma you earn is an ERC token that you can convert to ether if you need it. This, so the hope, should motivate the users to give even more often and better answers. 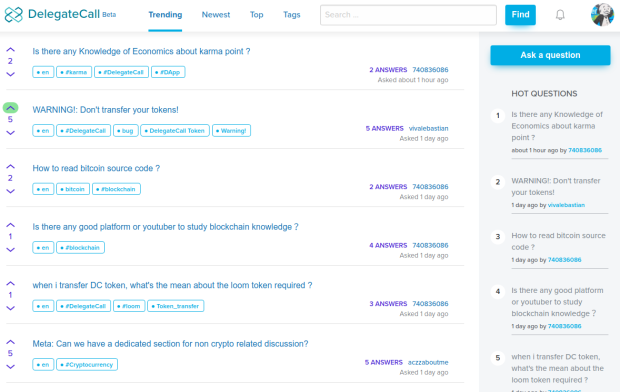 DelegateCall went online in mid-March as a beta version and is still relatively empty. Most questions are about DelegateCall itself, and there are seldom more than five to ten answers to a question. However, the platform has the potential to ignite once. Why should not it become standard practice for Internet users to earn something by producing high quality content by sharing their knowledge? However, once this happens, a platform like DelegateCall threatens to cause the same problem as CryptoKitties a few months ago:

The game used to breed, trade and sell cat images on the Ethereum Blockchain became so popular within a few days that it clogged the Ethereum Blockchain. For the Ethereum community, the CryptoKitties traffic jam was a crucial moment: he made it clear that it will not be possible to run onchain, the blockchain, any decentralized applications (dapps) that are in demand. Since then, efforts to realize various offchain solutions have intensified.

DelegateCall is now a first example of an architecture that could be part of the solution to scale Dapps. The platform processes the ERC tokens on a sidechain called by their developers, Loom, DAppChain.
DappChains, Plasma and DPOS

Whenever a user performs an action on DelegateCall – for example, if he gives an up vote to a question or answer – a transaction takes place on a blockchain. This transaction does not happen on the blockchain of Ethereum itself, but on a DAppChain. At DelegateCall there is a rudimentary block explorer for the DAppChain, here you can see, for example, that we have rated an answer. 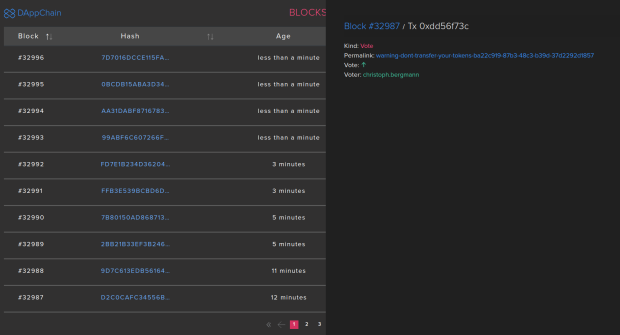 Loom’s project was free to use in other blockchain projects. Like Lisk, each Smart Contract has its own sidechain, which has just that special purpose. Thousands of sidechains can grow around Ethereum in this way. Loom’s Software Development KIT (SDK) – which is not yet freely available but is being announced for next month – currently supports only one form of consensus on the order of transactions on the chain: the Delegated Proof of Stake algorithm (DPOS), which we already know from BitShares, Steemit, Lisk and EOS. This algorithm promises extremely high scalability, but centralizes itself for a certain amount of block producers. In the future, according to James Duffy of Loom in an AMA, other consensus procedures should also be supported.

The cryptocurrency EOS, which will go live in June and is valued at more than $ 10 billion, basically does the same thing as a DAppChain: It puts Ethereum’s Smart Contracts on a DPOS blockchain to better scale them. With the DPOS DAppChains, Ethereum now offers exactly the same functionality – only better: While EOS has centralized everything to the 21 delegates, each DAppChain is rooted in Ethereum’s decentralized blockchain. Confidence in the delegates therefore extends only to one specific application, not to the entire currency.

To do this, the DAppChains use the plasma cash protocol developed by Vitalik Buterin and Joseph Poon for sidechains. This gives the token that you outsource to a sidechain, a unique serial number. With it you can track the transaction history of this token on the sidechain and, above all: One can form compact proof of the history and publish as Merkle proof on the Ethereum Blockchain. This proof on the main chain makes it possible to check whether the transaction history on the sidechain is correct up to this moment. The frequency of the Merkle proof varies depending on the security desired for the sidechain. The tokens or ethers on the sidechain can always be translated to the mainchain.
Games as a killer app for DAppChains?

In March, Loom invited other developers to sign up for the beta version of the DAppChain SDK to experiment with the sidechains. Since then, there seem to be around a dozen DAppChain projects. Most of them are Blockchain games in the style of CryptoKitties. 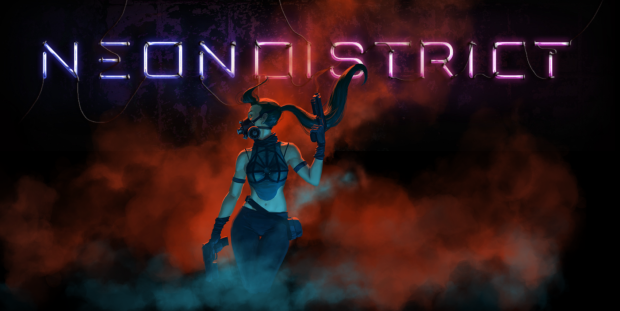 One example is Loom’s own CryptoZombies Battleground, a digital collectible card game designed to act as a non-fungible ERC721 token on its own DAppChain. There are also other, similar zombie games to come. Another game in development is Neon District, a cyperpunk RPG that combines trading cards and online role-playing games. It also uses the ERC721 tokens to create individualized cards for each player. Over time, players’ cards will improve as they gain experience, and thus more valuable. In the game, the tokens are processed on a DAppChain, but it is always possible to return them to the Ethereum main chain.

The sidechains promise that the potential that the Ethereum scene has inadvertently discovered with the CryptoKitties – namely, blockchain-based digital games with non-fungible tokens – can unfold freely without unduly burdening the Ethereum Blockchain itself. This could open the floodgates to Ethereum tokens being used in MMORPGs, which could make the economics of these games many times more interesting – and more real -.

Most importantly, such blockchain games could become a laboratory for scaling a blockchain for smart contracts.