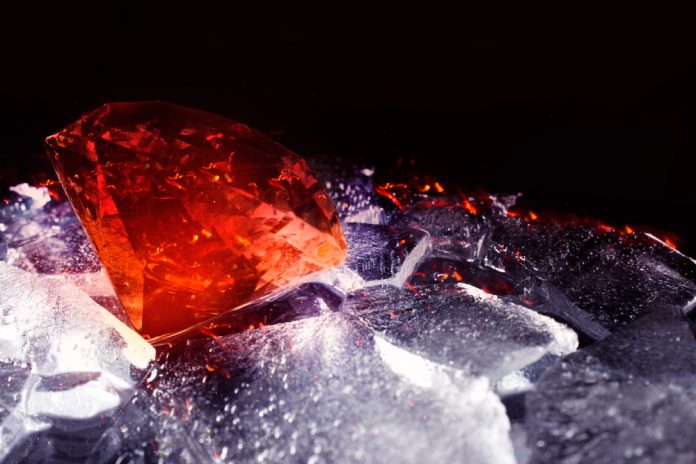 How can the trade in blood diamonds and other conflict minerals be curbed? Several projects rely on blockchain technology for new solutions. In detail, there are clear differences.

The world’s natural resources have been causing armed conflicts, trade wars and slavery under inhumane conditions for centuries. Particularly hard hit is Africa. When huge deposits of rough diamonds were discovered in South Africa in the mid-nineteenth century, diamond seekers rushed in, first depositing individual claims to find their fortune. But it soon became clear that you can only bring enough gems to the surface if you use your capital together and rely on industrial methods. The miners teamed up to form the company De Beers under the leadership of British colonial ruler Cecil Rhodes.

De Beers quickly became a major cartel with a clear goal: to bring global diamond trading under control. In Africa and elsewhere so many of the glittering stones were found that their value would have dropped quickly – if their trade had not been regulated by a central body. Around 1900, the De Beers cartel had 90 percent of the world’s diamond production in its hands and was able to raise prices as much as he liked. As demand for the luxury leg sank in the 1940s, De Beers launched the Diamonds are Forever ad campaign in the US, which equated giving away diamonds with a declaration of love. The monopoly has now narrowed, but until today, the price of diamonds is based on the value set by De Beers – now part of the Anglo American group.

The conditions for miners are still unimaginably hard today. In addition, many conflicts in Africa are financed by the diamond trade. Militias in countries such as Angola, Sierra Leone and Zimbabwe use the sale of natural resources to arm themselves – for brutal wars against individual populations. In the late 1990s, these abuses were then known to a wider public. The conflict diamonds or blood diamonds were criticized.

Diamonds are not the only conflict minerals whose trade is linked to human rights violations. The most problematic raw materials include gold, tin ore, tungsten ore and tantalum ore (coltan), often grouped under the heading 3TG (for the English terms Tungsten, Tantalum, Tin and Gold). These minerals are in smartphones, camera lenses and many other electronic devices.

The definition of “conflict diamonds” is not unique

In 2003, the United Nations General Assembly agreed on the Kimberley Process. The aim was to create a certification system that guarantees that “the presence of conflict diamonds in the chain of production, export and import of rough diamonds in the participating countries will be eliminated”. Many observers are critical of these efforts. A once-off certificate can be forged, especially when several parties, such as mine owners and controllers, join forces.

Even the official definition of conflict diamonds is not clear and leaves loopholes open. For example, stones that are mined under corrupt but legitimate governments, with child labor and forced labor, do not belong to this name because they are not rebel groups. While the Kimberley Process is considered a step in the right direction, it has achieved a reduction in circulating blood diamonds, but in the countries affected, the most serious human rights violations are still being financed with conflict minerals.

Can the blockchain filter the stream of conflict minerals?

To further reduce trade in conflict diamonds and to better control delivery routes, the industry is now embracing blockchain technology support. From the mine to the end consumer, minerals go through a long line of stations. Once taken from the earth, the stones are taken from a certification center, sent by exporters, transport companies and importers through the world and cut from raw material to gem or for other purposes.

With blockchain tracking, the path of the individual stones at each station is confirmed by timestamps – ie time stamps – in such a way that the corresponding data blocks can not be changed afterwards. At each section of the chain, it can be clearly investigated where the stone came from and through whose hands he went. Ideally, this creates an independent, seamless and transparent supply chain. Due to the continuous interaction of many trustworthy individual stations, it could be difficult or even impossible for unregistered producers, smugglers and counterfeiters to bring their stones to the international market. So far the theory.

One of the biggest projects ever in this area is Everledger. This system uses IBM’s supply chain chainchain, which builds on the Linux-based distributed ledger technology Hyperledger Fabric. Everledger wants to create transparency for the source of various valuables and build an “ecosystem of trust” from the complex, fragmented supply chains. The diamonds traded on this platform have Kimberley process certificates. They are rated using a special non-destructive technique for over 40 properties such as color and purity and get unique IDs. In the blockchain then creates a chronicle on which the changing owner and owner are registered to the end customer. Over 2.2 million diamonds have already been tagged by Everledger in this manner.

Who gets insight into the blockchain?

Some of the best-known benefits of many blockchain technologies, such as Bitcoin, include transparency and trust through decentralization. This is possible, among other things, because new users do not need special permission to get insights into the network. Anyone can enter and participate in transactions and their verification. Such blockchains are called permissionless.

In industrial use, however, actors often want to maintain control over their networks. That is why many companies use permissioned blockchains for their logistics, where the participants first have to be activated from a central location and, depending on their status, receive specific rights. That’s the way IBM’s supply chain solution works. Permissioned blockchains do not want to be decentralized but rely on other benefits of distributed ledger technology, such as immutability, automated data synchronization, privacy and security. Critics fear that there is a risk of corruption on such closed data chains – not only with explosive goods such as conflict minerals.

The smear of decentralization in favor of internal security is currently evident in IBM and Maersk’s efforts for the common logistics solution TradeLens. Here, the world trade is registered on a permissioned Blockchain and controlled. Many competitors are skeptical and refrain because the logistics giant Maersk wants to keep the intellectual property rights to the system – and thus the last word. When asked about the problem, Everledger, which is also used for the diamonds, refers to the use of the Federated Consensus Protocol, which creates the technical conditions for agreements within the Blockchain. That should prevent mischief.

The diamond giant De Beer is working on its own solution

The diamond giant De Beer is also working on its own blockchain solution for its diamonds. This is called Tracr and is being developed in collaboration with several major diamond producers and other partners. Tracr also wants to ensure that each stone receives its own global ID, which is then passed through the tamper-proof data chain. Again, the blockchain authorities reserve the right to decide for themselves whom they grant access to their network and who do not.

An example of a solution on a permissionless blockchain is Minespider. The appropriate open-source protocol works with the Ethereum Blockchain, emphasizing decentralization and self-sustaining data sovereignty. Developers work with organizations such as the Responsible Minerals Initiative and BetterChain.org. The focus here is initially on gold, but the technology is transferable to other mineral resources such as diamonds. The only information in the supply chain that will not be visible for safety reasons is the transport times and types when the valuable raw materials leave the mines.

A problem with decentralized chains such as this is to give participants sufficient incentives not to enter false data. Minespider wants to develop its own token, which will reward the participants. Everyone in the chain receives a Confidence Score, which increases the more reliably he works and can be withdrawn in case of incorrect data entry. Minespider is still in the advanced stages of development. A pilot project is planned for the end of the first quarter of 2019.

The blockchain is the future of logistics

For many industry players, blockchain is the future for complex supply chains. Minespider CEO Nathan Williams sees no difficulty in convincing people of the need for Blockchain: “Right now, everyone is afraid to miss out.” The market is big enough for multiple providers of logistic Distributed Ledger solutions and development still very young, so that one can now observe how this ecosystem develops. The question is in which segments which systems will prevail, and whether the benefits will be relevant only to the industry, or whether something will actually change in the grievances at the beginning of the chains.