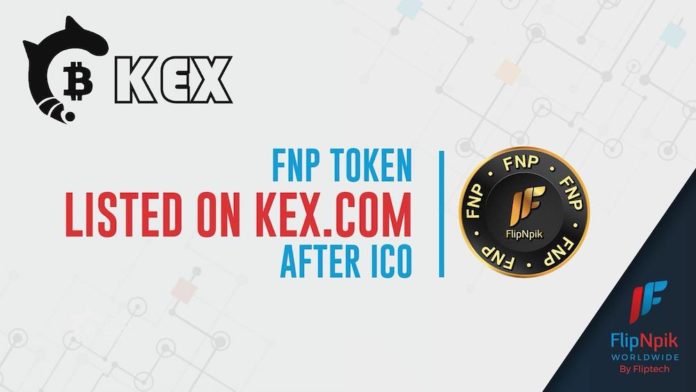 3rd Oct, Singapore, Singapore – FlipNpik, a blockchain-powered collaborative social media ecosystem that allows users to monetize their social media engagements, is now pleased to announce that its Initial Coin Offering (ICO) is live, having previously raised USD 2.5 million in private sale.
The FNP, an ERC-20 token, will be available for sale on the official FlipNpik website. “Unlike most ICOs in the market, FlipNpik focuses on corporate fundamentals and having a sound business revenue model. We have a ready product with ready users and merchants onboard,” says CEO of FlipNpik Asia, Ian Lin. As part of the ICO promotion, users will also receive 15% token bonus on the purchase of FNP tokens from now till 31st Oct.
The FNP token will be listed and traded on KEX exchange after the conclusion of the ICO. KEX is a global digital asset trading platform, led by a core team that comprises talents from TENCENT, HUOBI and HUAWEI, amongst other established tech companies. FlipNpik has also signed a Strategic Cooperation Agreement with KEX, which will further strengthen FlipNpik’s position and exposure in Asian markets, and leverage upon the expertise of KEX to make the ICO a success. “We are happy to partner FlipNpik, which offers a very unique value proposition and has great potential,” says Yin Xiao Gang, CEO of KEX Group.

FlipNpik is currently working to list the FNP token on several other exchange platforms and more announcements will follow.

FlipNpik is the first blockchain-based collaborative social media to allow users to monetize their social media posts by supporting their favourite local shops. Users are rewarded with Flip credits for posting and promoting businesses, and this translates to enhanced marketing and visibility for businesses. The Flip credits can be used within the FlipNpik ecosystem to redeem promotions, or exchanged for FNP tokens which can be traded on exchanges. The FlipNpik mobile app is available on iOS and Android, and FlipNpik has listed businesses from France, Great Britain, Ireland, Japan, South Korea, Singapore, and Switzerland. https://flipnpik.io

Kex is an integrated global digital currency trading platform, currently running an international site (www.kex.com) as well as a Korean site (www.kex.kr), with a Russian site to be launched soon. Trading volume of KEX can be found on https://www.feixiaohao.com/exchange/kex