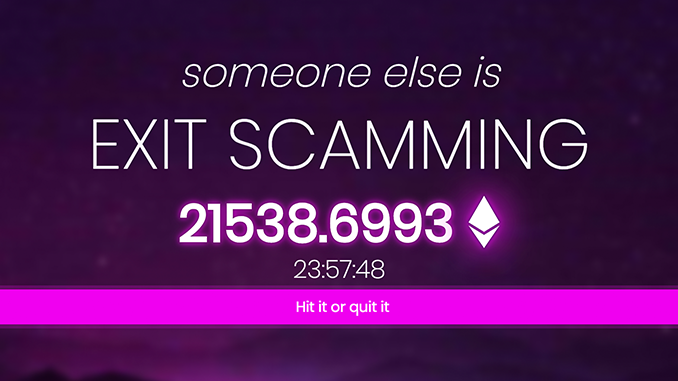 Although it is a Ponzi scheme, Fomo3D is one of the most popular Ethereum applications (DAPP). The winner was pleased to receive several million US dollars worth of ethers. However, he himself will have invested a lot to crack the jackpot.

The goal for Fomo3D is to be the last to send Ethereum to a Smart Contract before the clock expires. Each new deposit will extend the clock by 30 seconds. The timer can only be charged for a maximum of 24 hours. All depositors also earn on the funds deposited after them.

Many were in agreement that the timer will never go down to zero on Fomo3D. Because there were quite early bots on the platform that made deposits when the timer came close to 0 seconds.

However, the jackpot has been cracked and the winner has secured nearly 10,000 ETHs, almost $ 3 million. Behind it, however, is a targeted attack on Fomo3D. Apparently someone has spent days watching the behavior of individual bots and trying to manipulate.

Because no other transactions have been written to the blocks, no transaction has been confirmed to Fomo3D either. So even if someone has seen from the outside as the clock went down to zero, he should have hardly had a chance to make a transaction to Fomo3D. A look at Etherscan shows how there are a number of blocks that have fewer than 10 transactions.

In retrospect, however, it can no longer be said how much capital had to be invested to crack the jackpot, but it should have been quite a bit in connection with the tests.

Meanwhile, by the way, a new round Fomo3D started. But I can only advise against anyone to participate because the game with normal means due to the blocks and the manipulation is not to win.