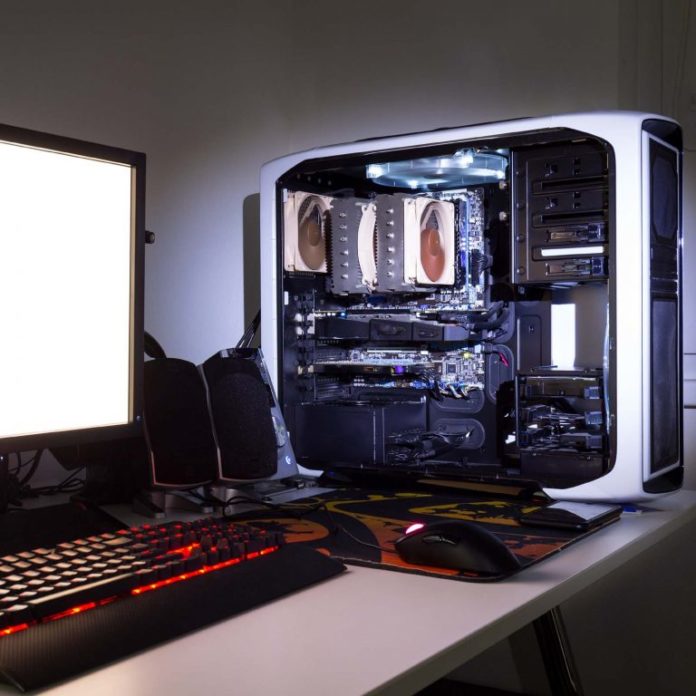 A hybrid computer, designed to please both gamers and miners, is now selling in Russia. The company offering the new PC promises a quarter ether of monthly income for gaming enthusiasts who would like to mine when their expensive configuration is idling. The premiere coincides with reports of new negative forecasts for hardware manufacturers.

The Russian company, Crypto Technology, presented its latest product, Cashbox X-Gaming, last week in Saint Petersburg where it is based. The platform is a hybrid between a powerful gaming computer and a cryptocurrency mining device boasting enough capacity to fulfill both functions.

The base model is equipped with Intel Core i5 or i7 processors, two Nvidia GTX 1060/1070/1080 Ti video cards, between 16 and 64 GB of DDR4 RAM, plenty of cooling fans, and a high-quality sound system. The low-end configuration offers a hashrate of 106 MH/S, but it can go up to 181 MH/s with upgraded components, according to Russian crypto media.

Cashbox X-Gaming comes at a starting price of less than 140,000 rubles, around $2,200 USD, and is accompanied by a three-year warranty. More potent configs, utilizing more powerful processors and graphics processing units, will be a bit more expensive. Quoted by the Web-Payment.ru portal, Crypto Technology CEO Anton Sobin said that sales will not be limited to the Russian market and noted:

We are focused on developing the mining sector in Russia, and therefore we try to make the equipment available to everyone. The gaming model will allow users who are not ready for serious investments to try mining and understand the specifics of this exciting and profitable crypto sphere.

Not so long ago, cryptocurrency mining of some altcoins was possible even with an average PC. Nowadays, it requires some serious computing power and home mining rigs often feature 6, 8 or more of the latest GPUs on the market, specially designed motherboards and smart power supply units.

The new Russian gaming PC is basically doubling as a GPU mining device. Its developers claim that it’s capable of minting about 0.23 ETH per month, which is ~$100 at the time of writing. The preset and tuned configuration mines when it’s not used for gaming, earning passive income for its owner. The company also offers free training on crypto mining and 24-hour tech support.

And while Russian entrepreneurs feel optimistic about the market prospects for their gaming/mining PC, hardware manufacturers in Asia are starting to feel more and more pessimistic as recent trends on crypto markets are diminishing the returns from mining. Registering weak demand from miners and gamers, major GPU producers, Nvidia and AMD, as well as OEM suppliers like Asustek Computer, Gigabyte Technology, MSI, and TUL, have seen increasing inventories in the past weeks.

The latest company to hear a negative forecast was Gigabyte, a leading manufacturer of motherboards and graphics cards used in mining applications. According to Capital Investment Management, the Taiwanese hardware manufacturer is set to see lower profitability in the second quarter of 2018, due to the decline in shipments and GPU prices as the crypto mining frenzy subsides, The Taipei Times reports.

“The prices of major cryptocurrencies have plunged after peaking in early 2018 […] leading to persistently lower demand for cryptocurrency mining and for Gigabyte graphics card shipments, which decreased somewhat since the beginning of the second quarter,” the investment advisory firm said last week. Analysts point out that Gigabyte’s revenues reached about NT$5 billion (~$164 million) in April and May, compared to NT$8.5 billion (~278 million) in March. They believe Q2 revenues will be lower than those from the first quarter. According to the Economic Daily News, Gigabyte has shipped 1.2 million video cards in the first three months of 2018 and can see a decline of 20 percent in the second quarterly period.

According to K.J. Sun, a company spokesman, Gigabyte is expecting the launch of Nvidia’s new family of GPUs, Volta, to bolster card sales. Recent reports suggest that the Volta lineup will be presented in September, at the earliest. It’s been rumored that Intel may also delay the launch of its new Cannon Lake CPUs.

All this can negatively affect Gigabyte’s revenues and earnings in the second half of the year, Capital Investment notes. The company’s shares fell 14 percent last month largely due to the weaker demand for hardware used in crypto mining and the postponed launch of Volta.

What are your expectations for the future of the mining hardware market? Let us know in the comments section below.

StreamPay introduces new blockchain based platform to the Supply Chain industry and gains momentum as their ICO Pre-Sale is set...