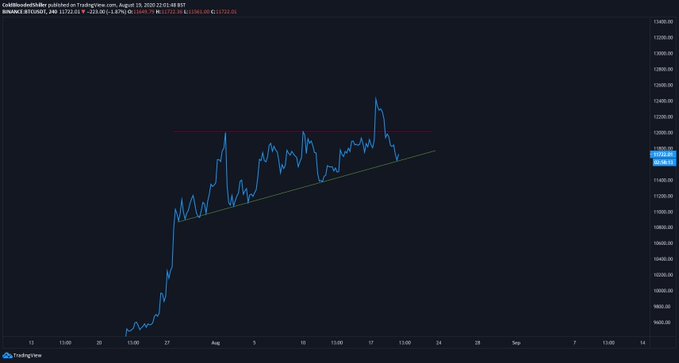 Is Bitcoin’s Uptrend Intact? Many Analysts Think So

Despite the technical damage Bitcoin suffered after dropping below $12,000, analysts remain optimistic about the prospects of the leading cryptocurrency.

One analyst shared the chart below after the worst of the correction. The chart shows that Bitcoin actually bounced off a pivotal diagonal uptrend that has held since the end of July. The level stretches back to $11,000.

“Looks like the $BTC demand is still in tact. Price below this diagonal being eaten up. Great point of failure for more downside given the validity of the line.”

BTC holding this level suggests it remains in an ascending triangle formation. The formation predicts that Bitcoin will eventually break to $13,000 should it validate the triangle by holding above $12,000.

This optimism was echoed by a swath of other analysts.

Another noted that since Bitcoin held the $11,600 range, there is a good likelihood the price trend reverts higher in the coming days: “$BTC Basically I’m long and will close if we break below. Low TF is noise and higher TF structure is still bullish – higher highs and lows.”

Commenting on the On Balance Volume indicator, which shows the flow of capital in markets, one trader said that it seems that there’s capital flooding into Bitcoin:

“OBV is starting to look promising. Buy-pressure is evident over the last 2 hours ever since putting in the day’s lows. $BTC longs in this region may prove to be rewarding over the coming days/weeks.”

The fundamentals of the cryptocurrency market are also intact, analysts argue.

Per previous reports from Bitcoinist previously, digital asset manager Charles Edwards argued that it’s hard to be bearish on Bitcoin. This is due to a confluence of fundamental factors, which includes but isn’t limited to: