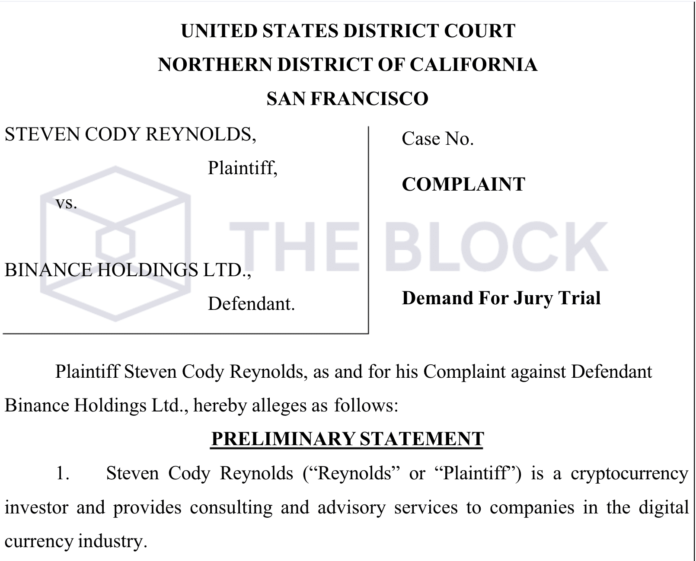 There are many factors that influence traders when choosing an exchange: liquidity, volatility, availability of certain trading pairs, etc., and it is also imperative for an exchange to have a prominent media presence and a trustworthy reputation.

If one company is dominating the market and expanding their reach into all corners of the industry, it can establish a dangerous precedent. Should one company manage to monopolize the market, it will be able to dictate what options it has available to them.

This could potentially stagnate the healthy development of industry and hurts the quality of the end-product. Looking at Binance with this in mind, let’s see how the platform has developed and attracted new users over the years while blocking out any possible competition, and what tactics they used to get there.

Binance was founded by Changpeng Zhao, who got his start in the blockchain field working for Blockchain.info as head of development and then spent some time at OKCoin as chief technology officer. His idea for Binance was to create a trading platform that was independent of fiat currencies.

Working closely with Bitcoin evangelists like Roger Ver and Ben Reeves, he discovered that he could avoid certain regulatory complications that came with using fiat currencies on an exchange platform if he were to do away with fiat altogether as it increases the risk of money-laundering.

The Binance ICO commenced in July 2017 in a booming industry, and investors happily invested a sum of $15 million. In just the first three months of its existence, the company reported a daily transaction volume of $500 million. With a 0.1% fee applied to every transaction, Binance was raking in about $7.5 million in commission fees alone by October 2017.

At the time, Bittrex was considered one of the leading altcoin exchanges, with 190+ cryptocurrencies offered and a daily transaction volume of about $2.6 billion, which made it the third-largest exchange by volume metric according to CoinMarketCap. However, because of the spike in interest from the public, Bittrex was unable to handle the increasing traffic and faced a lot of criticism for technical issues before eventually halting registration on the platform for new users. By that time, Binance was already offering 230+ trading pairs and its fees were considerably lower than Bittrex’s 0.25%.

Coincidentally, that same year China began its crackdown on crypto and a lot of China-based exchanges suffered or were shut down. Just a week before the ban was announced, Zhao’s team moved all their servers out of mainland China to a new office in Hong Kong. This chain of events made Binance safe from the Chinese government’s scrutiny and it became a leading altcoin exchange by the end of 2017, just 6 months into its existence.

By 2018, Binance went from having 2 million users to over 10 million users on the platform. Its popularity sparked some controversy in February 2018, when crypto advocate and founder of McAfee Associates, John McAfee, came to the conclusion that the exchange was hacked due to numerous reports of technical difficulties from Binance users. To prove him wrong, the company publicly posted their wallet addresses to prove that all the user funds are safe.

Just some questions please: Planned outages are usually announced to a company’s user base well in advance. The surprise aspect of yours concerns me. Next, there are screen images – possibly photoshopped – from different people that appear to indicate a hack. Can you comment?

However, McAfee did not claim that funds were stolen by the hackers but implied that the platform had been compromised due to a security breach leading to the sudden maintenance work announcement.

The public addresses that were shared by the company were also subject to scrutiny. In an investigation published by Bellingcat, these addresses underwent a clustering analysis revealing ties to addresses that were used by Al-Qassam, a terrorist group embargoed by both the US and the EU, to receive donations. These rumors were never addressed. However, a month later Binance partnered with blockchain analytics company CipherTrace to strengthen its anti-money laundering (AML) policies.

Later in May, Binance suffered a confirmed attack with hackers stealing $40M worth of Bitcoin. According to a statement released by Binance, hackers employed phishing tactics to gain access to API keys for user accounts and simultaneously execute inflated buy and sell orders. The exchange’s security system has been updated and a giveaway of 50,000 BNB was announced for those who had trading volumes of over 1 BTC in an effort to keep users on the platform. This, of course, did not help to win over smaller traders. The hack also brought into question whether McAfee’s previous suspicions had merit and this was actually the first security breach on Binance.

Listing Fee or a “Long-Term Payment”?

2018 had another controversy in store for Binance. It quickly became apparent that Binance was open to listing new cryptocurrencies at a rapid rate with almost 400 trading pairs offered.

In August of the same year, Christopher Franko, co-founder of Blockchain platform Expanse, revealed in a tweet that Binance had offered to list Expanse (EXP) for 400 BTC. Another user, allegedly a Vertcoin volunteer, claimed that Binance asked for $90 thousand in listing fees. Of course, Zhao defended his company’s reputation, pointing to the alleged Binance email address where the listing offer came from as a spoofed email.

However, a BlockStack filing with the U.S. Securities and Exchange Commission (SEC) revealed it had made a $250,000 payment to Binance to list its STX token. Blockstack was also to make three payments of about $250,000 to cover the additional three-year listing period along with an additional marketing fee. In total, they would be paying around $1.1 million in fees, a sum which directly contradicts Binance’s previous statements regarding their listing fees.

At one point they even promised to donate all of their acquired listing fees to charity. A company spokesperson responded that the payment received was a marketing fee that was Blockstack’s idea: “A long term payment fee is an incentive proposed by Blockstack for Binance to keep the token listed on the exchange.

This is a new payment fee proposed by Blockstack.” Since this is not considered a listing fee, it was not donated to charity. In response to the controversy, representatives from crypto exchanges OKEx and Kraken commented that listing evaluation should involve a lot of processes and considerations and that they do not charge any listing fees for the process. At the same time, Binance DEX charges a standard flat listing fee of 1,000 BNB, which is necessary to prevent adding tokens with little or no economic and technical viability, according to Changpeng Zhao.

This brings us to 2020, which began with another controversy. A former employee of Binance, Steven Reynold, filed a lawsuit against the company asking the court to award him no less than $337,500 in reimbursement.

Steven has been involved in official Binance Telegram channels, specifically ‘Binance Support’ (@binance_support), where he was employed from July to December 2017 as a community moderator. Allegedly, the Telegram group in question was left in Steven’s control. Binance team then reached out to him to delete the group and remove any mentions of the company from it. Reynolds complied with this request, according to the complaint.

A Binance representative claimed that Steven did not comply and misappropriated the group and its users for his personal gains. While they failed to protect the users in the group, Binance froze Steven’s account on the platform with all of his holdings, setting his withdrawal limit to 0, thereby illegally seizing his assets. The representative also claimed they wanted to sue Reynolds but could not locate him. No further news has come out regarding this complaint yet so we are awaiting a court decision.

This little hiccup did not stop Binance and its CEO Changpeng Zhao from going forward with their acquisition of CoinMarketCap, the largest crypto data aggregator. The purchase was made public on March 31st. The amount paid was not disclosed but was rumored to be as much as $400 million.

Previously, the company tried to compete with CMC, launching its own data aggregator Binance Info. However, it did not gain as many users as the most referenced price-tracking source in the crypto industry. Therefore, CZ started negotiations with Brandon Chez, CMC’s founder, that were finalized in the largest purchase made by Binance so far. At the time, Zhao made it clear that new ownership will not compromise CoinMarketCap’s independence: “Binance has no bearing on CoinMarketCap rankings. CoinMarketCap stays committed to providing the most accurate, timely, and quality cryptocurrency data in the industry while benefiting from Binance’s expertise, resources, and scale.”

However, things quickly changed with CoinMarketCap’s ranking methods. The most significant update before the purchase was CMC’s Liquidity metric. It was positioned as a more accurate rank for crypto exchanges that avoided calculating in possible inflated volumes. From the moment this feature was implemented, HitBTC established itself at the top of the rankings with industry-leading liquidity but lost its spot along with most of the other leaders following the purchase. Binance, of course, showed rapid growth in numbers.

The official narrative regarding the metric change was that, by dropping the monetary values and introducing a new scale from 0-1,000, the aggregate site was able to simplify the data for users. However, it was never explained why the positions of exchanges shifted so drastically.

Another major update was the introduction of a new “Web Traffic Factor” metric. It was announced on May 31 in a blog post by CoinMarketCap. At this moment, Binance is firmly sitting at the top of the ranking with a score of 1000 out of a possible 1000. The combined scores also placed Binance at #1 spot in the overall exchange rankings.

Justified criticism ensued when the public recalled past statements made by CoinMarketCap chief strategy officer Carylyne Chan, who is now its interim CEO. Previously she criticized this metric, saying: “We’ve seen other people do things like you’ve said, web traffic as a way [to verify exchanges are legitimate] but people trade using API keys so that’s why web traffic is not a good indicator.” Still, she assures that CoinMarketCap is an independent entity and is not being swayed by its new owner’s interests. “We do not update algorithms or rankings to suit anyone’s agenda, this runs completely counter to the history and value of CoinMarketCap,” she said.

This deep-dive into the short history of Binance seems very exemplary of a few common threads in the cryptocurrency industry. Some companies turn to cutthroat practices in the name of growth. While this is not an indictment of Binance as such, the above exploration points to a few notable events worth understanding.

Much of Binance’s growth can be attributed to an amazing PR team and a vocal CEO that keeps his name in the headlines. However, there appears to be a discrepancy in reputational expectations between the traditional world of finance and that in cryptocurrency. At the end of the day, trusting any cryptocurrency exchange, which is likely centralized as is in the case of Binance, reputation should play an important factor worth considering.

The post How did Binance Grow So Fast? A Walk Down the Exchange’s Rocky Road appeared first on CoinCentral.