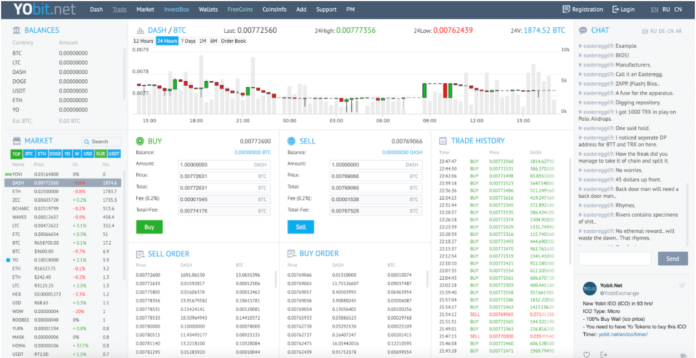 A steady presence in the cryptocurrency space since 2014, YoBit is one of a small set of exchanges that don’t require you to enter personal information to trade.

YoBit has a very user-friendly interface; virtually anyone can set up an account and start trading in under five minutes all while keeping their anonymity.

Anonymity, it seems, is a core tenet of the YoBit organization, as there are no formal owners or operators listed. This anonymity, however, seems more of an ideological preference of the exchange’s founders, rather than a more dubious alternative. It seems the exchange is based in Russia. With an average trade volume hovering around $60m, 800 coins available for trading, and 3353 trading pairs, YoBit is considered a moderately active platform.

YoBit offers a very wide variety of altcoins, and it allows altcoin creators to list their coins seemingly with very little obstacles or verification.

But how does the rest of YoBit stack up? Let’s find out. In this YoBit exchange review, we dig into everything you want to know, including:

YoBit seems to be better suited to an intermediate to advanced cryptocurrency trader. While beginner investors and traders could still use YoBit, they may be intimidated by the number of options on the trading screen.

If you’re well-versed in cryptocurrency trading, though, you’ll likely enjoy YoBit’s interface. The platform places all trading functionality on a single screen, so you don’t have to switch between tabs or open multiple windows to research and perform trades.

YoBit contains all of the functionality you would expect from an advanced trading platform. For analysis purposes, you have candlestick charts over multiple timeframes as well as an order book depth chart.

Additionally, you can view the current orders, daily volume, 24-hour highs and lows, and the trade history for each available market.

Placing buy and sell orders on YoBit is straightforward.

Launching a trade on YoBit

From your dashboard, simply input the amount of the cryptocurrency you’d like to buy/sell (or the total amount you’d like to receive for it) and the price. From there, YoBit automatically updates the other relevant fields.

A feature unique to YoBit is InvestBox. InvestBox is advertised by YoBit as a tool for developers to promote their coins as well as a means of passive income for investors. According to the YoBit team, you can earn anywhere between a 0.1% and 7.0% daily return on your investment through InvestBox.

It’s not entirely clear how InvestBox works. We advise our users to be wary of any feature or service offering a guaranteed percentage payout with advertised zero risks.

A representative from YoBit claims InvestBox is essentially a tool that provides visibility to low cap coins for short-term investments.

YoPony, another unique feature of YoBit, is a “cryptocurrency racing game” where users guess which horse will win the race. Each horse represents a coin, and the winning coin receives a 5BTC pump.

YoPony, along with dice games, are essentially based on a randomized probability. The legality of the feature is between YoBit and their local jurisdiction, but we advise our users to be wary in participating.

The representative from YoBit claims that YoPony is a means to keep users incentivized and engaged to use the platform. An example:

YoBit’s trading fees are straightforward – just 0.2 percent per trade. It doesn’t matter whether you’re the trade maker or taker. Your monthly trading volume has no effect on the fee either.

YoBit has quite a few cryptocurrency markets at your disposal. Most of the supported cryptocurrency are available as trading pairs with BTC, ETH, DOGE, USD, RUR, or USDT. In these markets, you can trade:

Listing a coin on YoBit is a relatively straightforward process, so the platform also contains numerous low-cap cryptocurrencies that you wouldn’t be able to find on other exchanges.

There do not appear to be any transfer limits on the YoBit exchange. You should note, though, that certain deposit and withdrawal methods come with varying levels of fees.

YoBit’s origins are somewhat shrouded in mystery. The exchange was started in Russia in 2014 and is currently registered in Panama as YoBiCrypto Corp. However, not much else is known about the founding team.

While the company’s duration since 2014 lends some credibility, a Google search yields a wide array of positive and negative reviews– which is natural for most any product or service.

YoBit, however, seems to be hit particularly hard by negative reviews, many of which appear to be fraudulent bot comments. For example, one of the negative reviewers on TrustPilot has left the same exact negative review for 13 different cryptocurrency exchanges and services.

A representative comments, “The Russian cryptocurrency exchange market is very bloody. Competitors create fake accounts to blanket their competition with negative reviews, they create scam accounts to trick users of other exchanges, and so on.”

The representative implores users to not follow headlines such as “yobit scam” and “Yobit steals money” as they are most likely posted by competitors using bots.

Rumors have circulated alleging that Pavel Krymov, a previously arrested financial fraudster, is the man behind YoBit. However, it has emerged that the rumors are unfounded. The team has stated that, “Rumors about the relationship between the Yobit exchange and Krymov are spread by our competitors for money, so do not be fooled by this misinformation.”

In an interview with a Russian media site, Mr. Krymov’s lawyer claimed: “Krymov has nothing to do with Yobit, these are baseless statements.”

One can still find remnants of the Krymov scandal, such as an account named Pavel Krymov is listed as the Founder and CEO on a page that claims to be the official YoBit page, which is also fraudulent.

This is a good point to remind our readers to not fall for scams online, whether that be fraudulent social media accounts or pages asking for your cryptocurrency.

Members of the cryptocurrency community seem to have mixed opinions. On TrustPilot, the exchange has a 4 out 5 star rating. However, those ratings are primarily split between 5-star reviews (62%) and 1-star reviews (24%). However, as we’ve seen with numerous fake TrustPilot reviews, it’s difficult to pinpoint a genuine sentiment.

Fund Security: Are Your Funds Safe on YoBit?

Regarding the security of your funds, YoBit offers little information. It’s unclear what percentage of funds the company holds in hot vs. cold storage. And the team keeps security mechanism information for internal eyes only.

YoBit hasn’t experienced a significant hack from which it couldn’t recover from. The exchange did experience a 51% attack in January 2019, but the exchange tweeted out that the funds would be covered by its insurance fund.

However, numerous users have reported difficulty accessing their cryptocurrency and withdrawing their funds from the exchange. However, virtually every exchange, even top-tier platforms such as Binance and Coinbase, has had difficulties with withdrawals.

YoBit offers two-factor authentication (2FA) to bring an additional layer of security to your individual account.

We implore our readers: if you do decide to use an exchange, only deposit what you can afford to lose.

YoBit’s customer support team typically responds to inquiries within the hour but may take up to 24 hours to answer your question.

For further help, the YoBit platform also includes a 24/7 chatbox from which you can talk with other YoBit users and members of the YoBit team.

YoBit runs two Telegram communities (one in English, one in Russian) which contains over 60,000 members each.

A representative from YoBit advises users to use Telegram support, claiming admins are usually online 24/7 and capable of solving all problems. The ticket option should serve as an additional option for those who don’t use Telegram.

Insurance fund: In the Support page, there is an option to request compensation from an insurance fund.

Not many details are known about the insurance fund. But from our research, the Exchange did deal with the repercussions of a 51% attack on the Ethereum Classic network.

Some users lost funds, but YoBit’s insurance covered the losses.

If you’re looking to trade cryptocurrency without supplying any KYC information, YoBit may be the exchange for you. It transacts around $60 million in daily volume and supports a wide variety of trading pairs.

YoBit is a relatively simple and intuitive platform, but it does take some getting used to trading if you are not already handy with trading fundamentals.

The exchange also seems to be very popular in international circles (language options include in English, Russian, and Chinese and is available all over the world. It also has a live chat within the trading interface, with languages available in English, German, Arabic, Chinese and Russian. It currently has the most trading pairs of any exchange, and accepts both USD and Russian Ruble.

However, the platform’s anonymity seems to be working against it on the public relations front, which seems to be a challenge for any organization without a central publicly available party. However, since it has been around since 2014 and does boast several authentic positive reviews, we’re inclined to give them the benefit of the doubt.

YoBit advocates can point to its presence and reputation on forums like BitcoinTalk and all user-reviews online should be taken with a grain of salt: whether positive or fake. A positive perspective will applaud YoBit’s support for anonymity, which is a core tenet of the self-sovereignty ethos of many cryptocurrency traders.

A few other risks worth mentioning is that the company hasn’t outlined any of their security practices, but it has seemed responsible and active in protecting its users from hacks (as evidenced with the prior ETC 51% attack).

YoBit also lists altcoins for minor listing payments. While the platform itself may be legitimate, many of the unchecked altcoins can be exceptionally risky.

YoBit has been operating for over five years, which does grant it some legitimate tenure in a relatively nascent industry.

Regardless, as with all exchanges, we advise users to tread very carefully: only trade what you can afford to lose and don’t risk large sums of cryptocurrency on the platform– words of warning particularly pertinent for smaller exchanges with large numbers of altcoins like YoBit.

Disclaimer: The content on CoinCentral is investment advice nor is it a replacement for advice from a certified financial planner. The creation of the above article is a sponsored post that meets our editorial guidelines for objective review.

The post YoBit Exchange Review: Is YoBit Legit, Safe, and Worth Your Time? appeared first on CoinCentral.