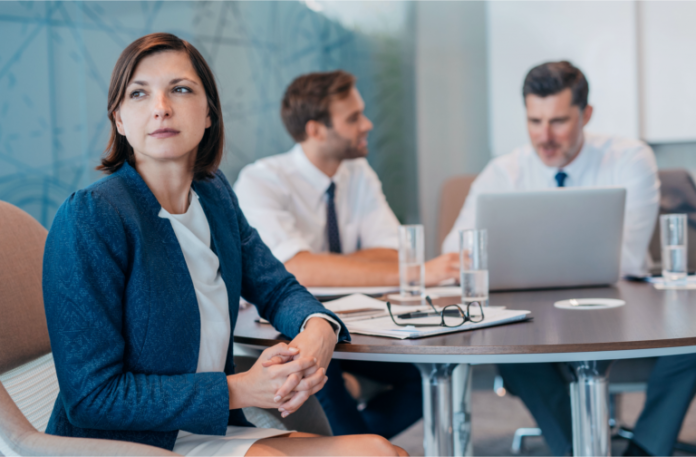 A recent headline on Micky — an iconoclastic media outlet that focuses on cryptocurrency — read “Crypto Twitterstorm: ‘Creepy sexist trolling’ or just a funny meme?” The article explained, “A post making fun of Blockstream’s Samson Mow has sparked a Twitterstorm over accusations of misogyny. Was it funny or just ‘sexist garbage’?”

The meme juxtaposed a photo of Mow embracing a Transformers toy box with an image of his romantic partner posing in gym clothes with an over-muscled male. The post was in bad taste, I believe, but it was far more anti-Mow and anti-male than sexist. The people involved in the Twitterstorm, including Mow, may or may not be sexists themselves. I don’t know. Discrimination against women is a common accusation hurled at males in crypto, however.

Here is what I do know. Everyone is equal on the blockchain; women, men, children, gays, transgendered people—all are equal. No gatekeeper slams a door shut because of a user’s race or any other secondary characteristic. Bitcoin is a protocol without prejudice or bias, with the only barriers to entry being the acquisition of knowledge and the access to a computer. In the flesh, the crypto community can be prone to the social insensitivity that comes from interacting more with technology than with people, but this is not discrimination; it is awkwardness. What seems to matter most to crypto zealots are characteristics such as competence and a willingness to learn. Contrast this with traditional payment systems for which politicians, bankers, and bureaucrats make all the rules, with entry being on their terms. Nevertheless, when crypto users interact off the blockchain, they are often greeted by accusations of sexism—that is, they are accused if they are male. The main reason given is that there are fewer women than men within the community. This is especially obvious at conferences where women are conspicuously in the minority both as attendees and speakers. Since attendance is open to all, however, it is not clear why men are blamed for this imbalance rather than non-attending women. Or whether blame is appropriate at all.

This is the moment at which I am supposed to pause and acknowledge the severity of the issue. I won’t. It is true: If the crypto community wants to thrive, then it should try to attract as many diverse people of goodwill as possible. But no one in crypto has a personal responsibility to mentor or encourage anyone else, and being awkward or indifferent does not make someone a sexist.

A Closer Look at the Crypto Community Imbalance

The first question to ask about the woman “problem” in crypto is “how real is it?” No one really knows, partly because so much anonymity still surrounds crypto. The literature suggests that the ratio between men and women is probably 5-1, with nearly 13 million women holding crypto in the United States alone. This ratio may reflect a lesser interest in technology on the part of women. According to Statista, “female employees make up between 28 percent (Microsoft) and 42 percent (Amazon) of the total workforce at America’s largest tech companies … Looking at actual tech jobs, that percentage drops much lower, as women take up fewer than 1 in 4 technical roles at each of the companies reporting such a figure”. Whether or not these figures are accurate, the number of women in crypto has clearly increased, and substantially so, which means this “problem” could self-solve.

But what if men always outnumber women, and significantly so? Would this matter? One of the main reasons the alleged discrimination has become a hot button issue is because there is a power struggle in our society that is far broader than the crypto community. These are the glory days of social justice — a political ideology that calls for the forcible distribution of wealth, opportunities, and privileges within a society, especially favoring women and minorities. Today, the worst insult to throw at a person or an organization is “sexist” or “racist”. The main power of social justice warriors lies in such words and in the self-righteousness with which they are spoken. The word “sexist” gives a speaker power over an accused who often falls over himself to prove his innocence. Or he is silenced. In short, the accusations are often a power play that creates a problem. Of course, many people are sincere in their accusations because they believe there is only one explanation for the asymmetry in gender numbers: discrimination against women. They are so passionately committed to this specific conclusion that merely arguing against it is viewed as discriminatory. They rush to boost the profile of females through dynamics like “all women” panels at conferences. In a sad irony, such panels often increase the focus on gender dissent and differences rather than diffuse it through integration and goodwill. Connie Gallippi of BitGive suggested a better method of promoting women. Frustrated by how few of them spoke at conferences and on panels, she compiled a list of highly qualified women and provided it to organizers. Both sides benefited. Both sides made progress without setting off fireworks.

Another positive suggestion to women: stop disparaging an entire community with hateful name calling. If the true goal is to encourage respect between the sexes, then this tactic moves in the opposite direction. Start dealing with prejudiced individuals on a one-on-one basis by standing up for yourselves, firmly and without rage. This is the approach that adults take.

Questions remain. If there is no systemic sexism within the crypto community, what explains the lack of women? And is it a problem that needs to be solved?

The article “Crypto-Patriarchy: The problem of Bitcoin’s male domination” by Brett Scott offered a standard social justice explanation. “This is due to our society having a lingering, systematic male bias built upon hundreds of years in which men have had the most access to job opportunities, educational opportunities, political rights, and (perhaps most importantly) cultural encouragement to actually seek those positions.” In short, Bitcoin is said to continue a narrative of oppression against women.

But Scott’s explanation does not apply to the 21st century, which is the century of crypto. In the last 50 years, the status of women has improved tremendously while that of men has declined. Western societies today are culturally biased in favor of women. Just one example: Female students far outnumber males at American universities. The Atlantic observed, “Where men once went to college in proportions far higher than women — 58 percent to 42 percent as recently as the 1970s — the ratio has now almost exactly reversed.” The “solution” is not a quota system or preferential treatment for either gender; in fact, quota systems are a large part of the problem. The solution is to let individuals choose and not to artificially block their choices.

As a purely practical matter, however, it is intriguing to wonder about the gender disparity in crypto. Many things other than discrimination could explain it. Women may be less interested than men in crypto just as they seem less interested — as a rough generalization — in technology or science. If so, this does not reflect on women’s intelligence any more than a lack of interest in becoming a librarian reflects badly on men’s. Biological differences or cultural ones could play a part but, again, this doesn’t equate to discrimination. Or, men may dominate the upper crust of crypto for no other reason than they were there first. They created and developed crypto, which means they assumed the costs of doing so in terms of time and reputation. They shouldered the risks. Who else should benefit most and longest? But, again, this may be self-correcting as more women enter the community.

Women who deride the community because they are not sufficiently or correctly “welcomed” into it may also be reflecting their own sexist bias. Academia and much of society preaches that there is an omnipresent and overwhelming patriarchy — that is, a system by which white males oppress everyone else. This political conclusion has immense personal implications. It makes women afraid of men and angry toward them. Aggrieved males feel anger in return, and they will tend to avoid any association with their accusers. This is the wrong way to build community; it is the stuff of schisms and power plays.

Women want respect and acknowledgement, and any person who treats others well deserves it. You get what you give, however. If Gallippi had offered fury rather than a useful solution for promoting women speakers, she might have ended up on an all-woman panel dissing the very community at whose door they were all knocking for entry.

The post How Many Women Users Before Crypto Is Not Sexist? appeared first on Bitcoin News.