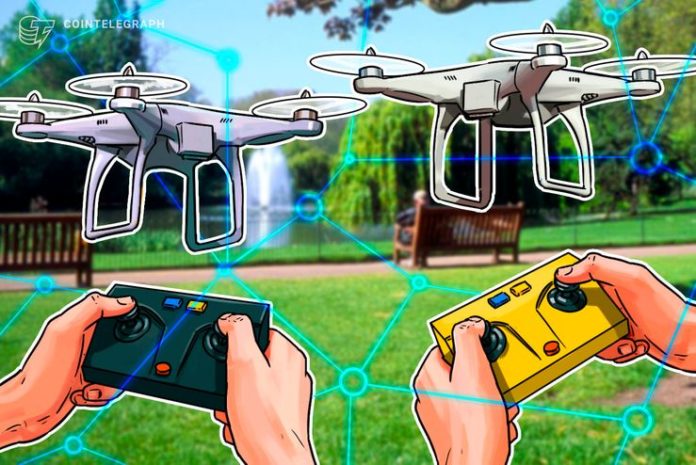 IBM has applied to patent a system that would use blockchain tech to tackle privacy and security concerns for drones, according to a filing published by the U.S. Patent and Trademark Office (USPTO) September 20.

The computing giant first filed the patent in March 2017, detailing how blockchain could be used to securely store data associated with unmanned aerial vehicles (UAVs) — more commonly known as drones. The patent notes that a blockchain system can provide “effective techniques for managing data related to a UAV […] particularly when a security risk level is considered to be relatively high.”

According to the filing, such data may include the drone’s location, its manufacturer and/or model, its flying behaviour (“e.g. erratic”), the model’s capabilities such as camera resolution, contextual information such as weather conditions, and the vehicle’s proximity to restricted or forbidden flight zones

The patent filing suggests that transaction data could be added “more frequently” as a block to the chain if and when a risk level is considered to be high. In terms of managing privacy concerns, if a drone is equipped with a high-resolution sensor, for example, the filing proposes that this could be recorded on the blockchain, with additional data transactions added whenever the sensor is detected to be activated.

As such, according to the filing, a shared and immutable ledger can enable multiple parties — which could include other drones, airspace controllers, regulatory bodies, and so forth — to participate as peers in managing risk. Validator nodes within the network could moreover grant special permissions, using the transparently stored data to verify that a drone has the authorization to fly in a particular zone.

The patent further proposes that smart contracts could be used to interface the blockchain system with extra information generated by machine learning models or other algorithms that compute historical data, both on- and off-chain. Such off-chain data could comprise, for example, raw video streaming data that has been capture during the drone’s flight.

IBM has been steadily expanding its involvement in blockchain across diverse fields, this summer signing a seminal five-year $740 million deal with the Australian government to use blockchain to improve data security and automation across federal departments.

Fresh data published late August revealed that IBM is vying with Chinese e-commerce giant Alibaba for the top spot on a new list ranking entities by the number of blockchain-related patents they have filed to date. Having filed 89 blockchain patents, IBM was only just outflanked by its rival — which filed 90.

Can Windfarm’s Prevent Bitcoin Price Crash Ahead of Mt.Gox Payments?

Two conflicting forces could be set to push the price of Bitcoin (BTC) in one direction or another. Following a...