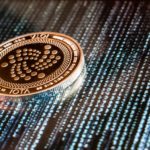 IOTA is a unique project in the crypto world, and in today’s article, we will be looking at some data in order to establish an IOTA price prediction for August.

IOTA is an open-source distributed ledger protocol developed for the Internet of Things(IoT)which does not use blockchain, but a different decentralized technology called ‘Tangle’.

IOTA’s Tangle is a Directed Acyclic Graph which is quantum-proof, has no fees, is infinitely scalable, and executes data transfers and transactions fast and in a secure manner.

There are no fixed limits on the transaction confirmation rate, with the network growing in speed based on its activity; thus, the more activity, the faster the network.

IOTA was developed to facilitate transactions and transfers for emerging Internet-of-Things (IoT) projects.

The coin is ranked 18th according to its market capitalization. The Return of Investment is marked at -58.17%.

However, on August 6th IOTA coin slowly started to decline downwards, and some time throughout the day it experienced a major fall from $0.298 to $0.281. The coin then recovered for the short term getting back to the $0.285 resistance level.

The movement of the coin in the next week followed the same pattern, slow signs of recovery with mild slumps here and there. 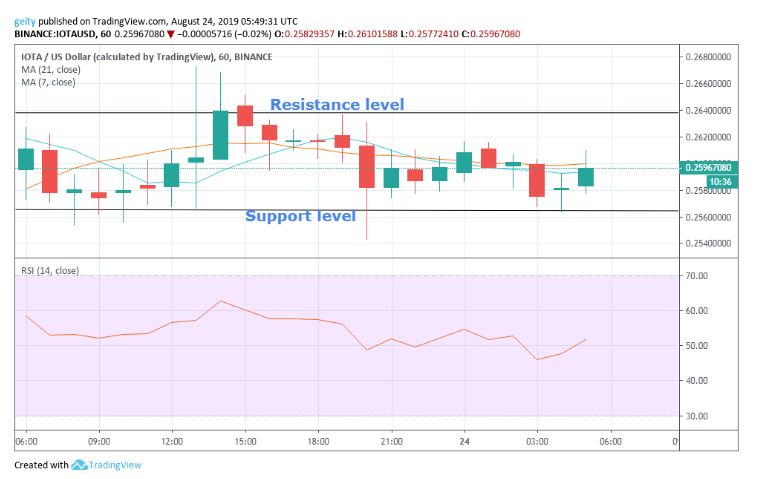 From the 20th to the 25th, the IOTA/USD pair has shown signs of a bullish tendency on a 4hr time frame. The bullish influence pushed the price from a critical support level of $0.23423 to $0.25647. in spite of this momentum, the bulls have apparently failed to succeed in breaking past the $0.26379 resistance level. An ascending triangular pattern was created in the past 3 days which suggests a continuation of the uptrend.

The Moving averages hint towards the continuation of the bullish movement, with the price being expected to go from $0.25647 and break the $0.26000 level.

The RSI indicator is also positive and it indicates that an upward rally is anticipated. On the other hand, if the price goes past the support level, then a drop is also expected, with support level going down to $0.25000 and $0.24000.

IOTA/USD pair has been receiving mixed price reactions on the hourly chart. For the 25th, the trend has been stagnating horizontally between the resistance level of $0.26386 and $0.25645 support level.

The entanglement of the moving averages has clearly shown a sideways trend. Market indecision was noticed from the RSI indicator, which is between 40 and 60, which indicated equality between buyers and sellers in the market momentum. Also, the recurrent presence of Doji candles in the charts has also confirmed the market’s indecision.

While in the past few days IOTA has improved its momentum, the short term IOTA price analysis is bullish according to signs of Bitcoin whales preparing to move the market again. Based on this, it’s improbable that IOTA will see any significant gains by the end of the month.

Several crypto forecasting websites have issued their own IOTA price prediction for August, and we decided to feature a few of them so that we can have a comprehensive view of the market sentiment.

The LongForecast website has said that the coin will open the month at 0.29 Dollars. They anticipate that August will have a maximum price of $0.31 and a minimum price of $0.22. The IOTA price predicted at the end of the month is of $0.29, with a 0.0% change for August.

30Rates provides its IOTA price prediction for the next remaining days of August:

Form the charts provided by Digital Coin Price, we can see that they do not anticipate IOTA to make any kind of recovery this month: 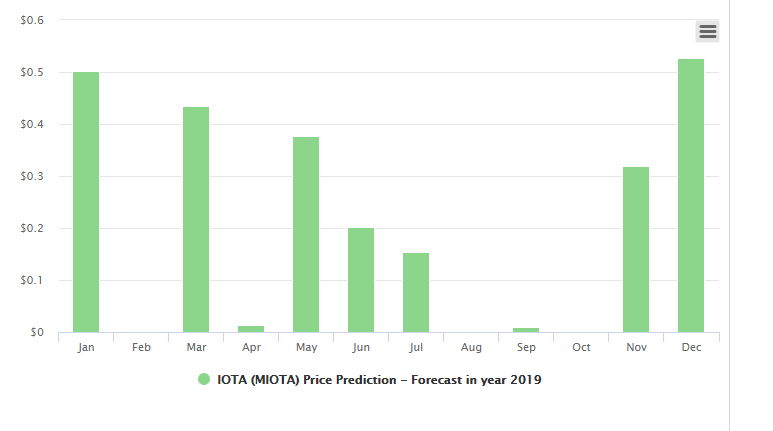 Based on previous charts and market sentiment, IOTA is not expected to end the month with significant gains even though there has been a slight bullish momentum that has pushed the coin back to $0.26. The maximum anticipated price at which MIOTA is expected to close the month of August is around at $0.30 levels.

Where to Spend Bitcoin?

New to the Bitcoin world? Bitcoin is a decentralized digital currency, which means it’s not connected to a central bank....