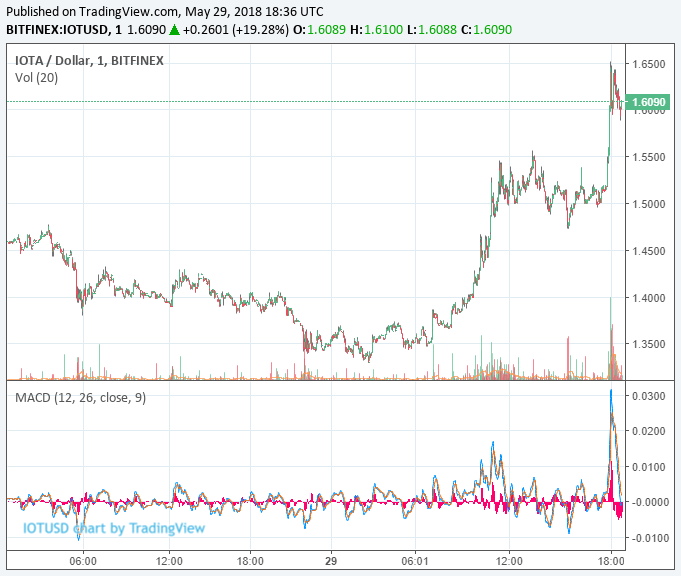 The IOTA price posted a double-digit percentage rally on Tuesday following the beta release of a new wallet client for the cryptocurrency.

IOTA had entered the day on a slight downslope, eventually declining as far as $1.33 during intraday trading. However, the IOTA price turned a corner at approximately 3:00 UTC and began a sustained rally that carried the token as high as $1.65 shortly before 18:00.

At present, IOTA is trading at just under $1.61, which translates into a $4.5 billion market cap. That move equates to a single-day increase of 15 percent, which was best among cryptocurrencies ranked in the top 10 by market cap.

Nearly one-third of all IOTA volume is concentrated on Bitfinex, and the token also features prominently on Binance and OKEx. Notably, the largest IOTA/KRW pair accounts for just eight percent of the token’s overall volume, preventing the “Kimchi premium” from having much effect on IOTA’s global average price.

Tuesday’s IOTA price rally occurred as part of a much wider market recovery — one that saw the bitcoin price creep back above $7,400 after briefly flirting with its $7,000 support level. Altogether, the cryptocurrency market cap added $15 billion over its previous day mark, and just six of the top 100 coins failed to advance against the US dollar.

Nevertheless, the IOTA token outpaced its peers, likely due to excitement over the beta release of Trinity, the project’s new wallet client. The wallet, which is currently available on Android and iOS (desktop version to follow), is designed to provide users — particularly ones who are less tech-savvy — with a more intuitive and full-featured experience than was previously available.

It was the second major development for the project in the past week. As CCN reported, IOTA also inked a deal with UNOPS — a technical advisory wing of the United Nations — to improve the transparency and efficiency of the agency’s internal operations.

IOTA Price Rallies after Trinity Wallet Receives Beta Release was originally published on https://www.ccn.com/. The IOTA-News Community curates, examines, and summarizes news from external services while producing its own original material. Copyrights from external sources will be credited as they pertain to their corresponding owners. The purpose is to make use of 3rd party content or pictures as either allusion or promotional endorsement of mentioned sites. If you have a claim of copyright infringement with respect to material, please mail to support[at]iota-news.com. IOTA-News.com is a community run website and is NOT affiliated with the IOTA Foundation in any way.