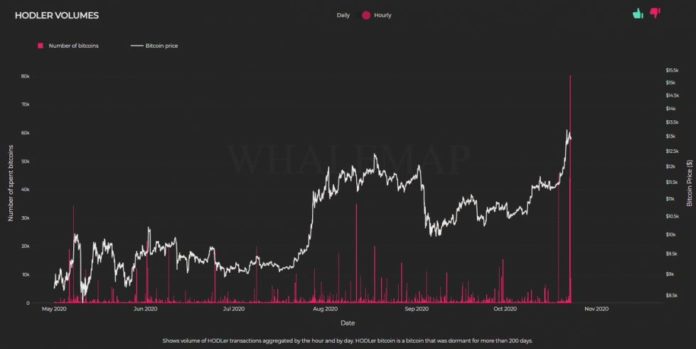 Bitcoin and the aggregated crypto market have been caught in the throes of an intense bull trend throughout the past few days.

It is now retesting these highs, which could indicate that further upside is imminent in the near-term.

There are a few bearish signs arising, however, including some massive BTC transfers into exchanges as well as a few on-chain divergences that favor sellers.

One analyst is concluding that these signs suggest Bitcoin’s upswing is getting overheated.

Although there is some resistance here, it is growing weaker with each visit that BTC makes to this level.

If it can break above it in the near-term, it will likely spark a massive buying frenzy that sends its price rocketing higher.

One trader recently observed a massive 80,000 Bitcoin movement, noting that it could be a somewhat bearish sign if it is indicative of an imminent inflow of selling pressure.

“I don’t really like that hodlers are moving 80k bitcoin,” he said while pointing to the below chart from Whale Map.

He also points to Bitcoin’s premiums entering the overbought territory, as well as a high ratio of whales entering exchanges as bear-favoring signs that could indicate this rally is overheated.

Bitcoin has undergone a strong rally over the past week, even after news that OKEx had blocked withdrawals. The coin...