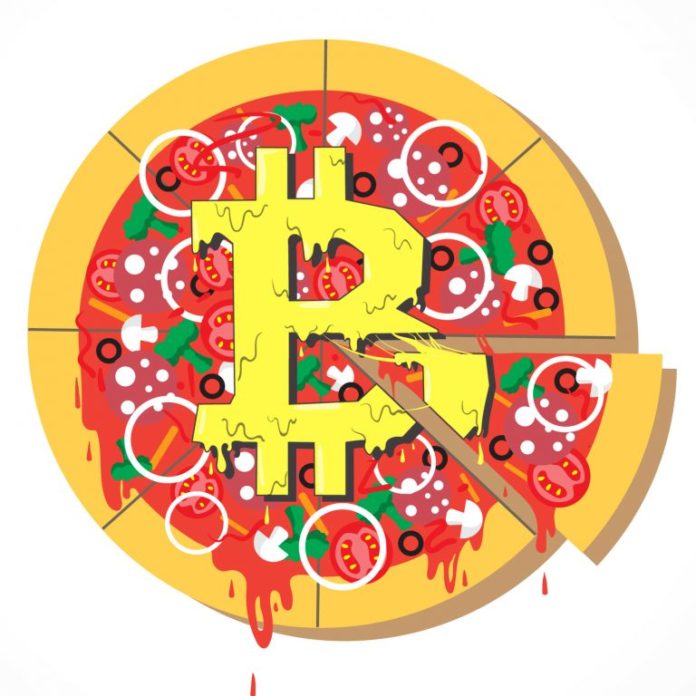 On May 22, the bitcoin community celebrated the second most important date in its calendar. No other date, save for January 3, 2009 when Satoshi mined the genesis block, is more symbolic. It was on May 22, 2010 that Laszlo Hanyecz purchased two pizzas for 10,000 BTC. Eight years on, the occasion has become part of bitcoin’s mythology. On May 18 2009, Laszlo posted a thread on the Bitcointalk forum entitled “Pizza for bitcoins?” In it, he explained: “I’ll pay 10,000 bitcoins for a couple of pizzas.. like maybe 2 large ones so I have some left over for the next day.  I like having left over pizza to nibble on later. You can make the pizza yourself and bring it to my house or order it for me from a delivery place, but what I’m aiming for is getting food delivered in exchange for bitcoins where I don’t have to order or prepare it myself, kind of like ordering a ‘breakfast platter’ at a hotel or something, they just bring you something to eat and you’re happy!”

Laszlo then went on to list his favorite toppings, before specifying “just standard stuff no weird fish topping or anything like that”. Within days he had a buyer and the deal went through on May 22. The event is symbolic, not so much for the value of those 10,000 BTC today, but because it marked one of the first public instances of bitcoin being used as a means of payment. The pizza thread, like the value of BTC, has since grown and grown, and today runs to 73 pages, having been viewed around 750,000 times.

Every year on May 22 the bitcoin community now competes to despatch the best pizza tweets and branded products, all tied to that then-minor but now massive day in 2010 when bitcoin proved its worth. It hasn’t stopped proving it ever since. To mark the occasion today, Bitstamp has calculated how far $83m of pizzas would stretch, using the following formula:

PIZZA TO THE MOON: In 2010, a Florida man bought two large pizzas for 10.000 #Bitcoin. Today, this could buy you enough pizzas to get to the International Space Station five times. #whenmoon Happy #BitcoinPizzaDay! #BTC #bitcoin pic.twitter.com/OuPeXC93CM

Hardware wallet manufacturer Ledger has gone one better, creating a limited edition Pizza Day Nano S. Just 1,337 of the units will be issued, each coming in a special Laszlo’s Pizza box complete with a sachet of red chilli pepper oil, for those who like to spice up their cold storage. As for the man who made this infamous anniversary come about, history records that Laszlo sold most of his bitcoins at around $1 apiece but, having contributed to its early source code, and done his bit to ensure real world adoption, he regrets nothing. In the crypto community, Laszlo Hanyecz’s actions will always be the ultimate “Florida man” story, destined to be commemorated faithfully every May 22 forevermore.

Would you buy a limited edition Pizza Day wallet? Let us know in the comments section below.

Images courtesy of Shutterstock, and Ledger.

No more taxes on cryptocurrencies in Poland

Crypto users in Poland will no longer have to pay taxes on cryptocurrency trading. In doing so, the Polish Ministry...