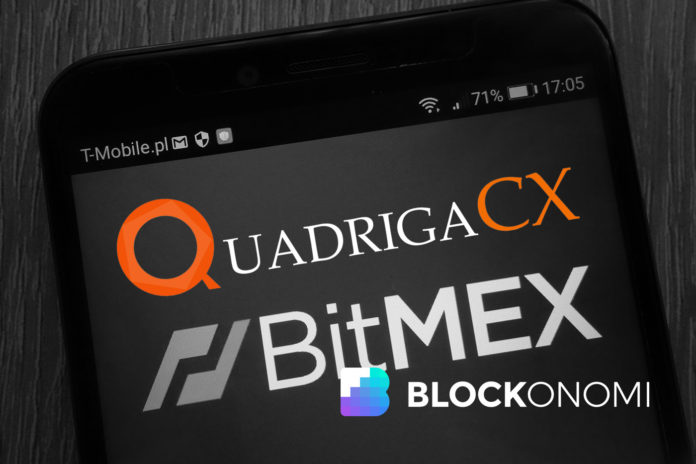 One of the crypto industry’s most convoluted imbroglios to-date developed even further just recently, as internet sleuths stumbled across odd sets of data. They claim that a Reddit user who frequented Bitcoin trading forums, specifically to post images of high-ticket trades, is Michael Patryn, a purported co-founder of disgraced Canadian exchange QuadrigaCX.

According to a report by The Block, which compiled these rumors, a Reddit user going by the moniker “MikeXBT” could very well be Patryn, the co-founder of the aforementioned exchange, which lost its founder to a health concern and $140 million worth of cryptocurrencies in December. Mike, of course, being short for Michael and XBT being Bitcoin’s ticker symbol on a number of exchanges, namely the Seychelles-registered BitMEX.

Following a search of the user’s extensive Reddit history, which was centered around Bitcoin, The Block discovered that MikeXBT hinted that he was a shareholder in QuadrigaCX, responding to an inquiry about a shareholders meeting of the Vancouver-based company. Further contributing to the theory that MikeXBT is Patryn, the Reddit user once replied to a commenter who addressed him as Patryn. Moreover, Canadian Bitcoiner Francis Pouliot once nominated Patryn for a stint at the Bitcoin Alliance, in which the nominator mentioned the handle nearly character-for-character.

With MikeXBT being all but confirmed to be Patryn, purportedly also known as Omar Dhanani, a felon who served 18 months for operating a money laundering scheme, The Block delved into his trading habits. In a number of appearances on the BitcoinMarkets subreddit, a popular forum for traders, Patryn made comments about taking multi-million dollar longs and shorts on BitMEX. A purported log of some of the user’s trades can be seen below.

As the evidence points to Patryn making such multi-million dollar trades, some have begun to question the intent of the shadowed QuadrigaCX executive’s jaw-droppingly large trades. While there’s a high likelihood that MikeXBT was trading out of his own pocket, some cynics have speculated that Patryn was taking on risk (potentially with customer funds) to help the Canadian exchange.

Coinbase CEO Brian Armstrong recently touched on this theory that QuadrigaCX traded customer funds in a bid to return to some semblance of financial stability. Citing Coinbase’s research team and his own understanding of this fracas, the San Francisco-based industry insider noted that there’s a substantial chance the company was attempting to trade funds to get “out of a hole.” But, Armstrong made it clear that if this is even true, these attempts were futile, as QuadrigaCX’s mistakes caught up with them. And as some would say, the rest is history.

This comes as key researchers in this case, including Big Four auditor Ernst & Young, have confirmed that addresses tied to the embattled platform have been left out to dry for months. Per previous reports from Blockonomi, blockchain researcher James Edwards revealed that 649,708 Ether, valued at over $100 million at their transfer date, left the exchange’s Ethereum wallets for Bitfinex and Poloniex in December 2018, just days before founder Gerald Cotten died.

Days after Edwards’ report, Ernst & Young, a key facet in QuadrigaCX’s ongoing court proceedings, revealed that the exchange’s Bitcoin wallets have been empty since 2018. Not just late-2018, but in April 2018. The auditor claims to that contrary to the affidavit filed by Jennifer Robertson, Cotten’s widow, there are not dozens of millions worth of BTC in the QuadrigaCX-linked addresses, but “nil.”

It is clear that this multi-month debacle won’t see a resolution any time soon, hence why sources tell Fortune that the FBI and the Royal Canadian Mounted Police (RCMP) could be working in tandem to bring what has really happened to light.

The post Mysterious QuadrigaCX Co-Founder Was Once A BitMEX Bitcoin Whale appeared first on Blockonomi.

In the cryptocurrency world, there is never any guaranteed price momentum to speak of. Two days ago, the market seemed...