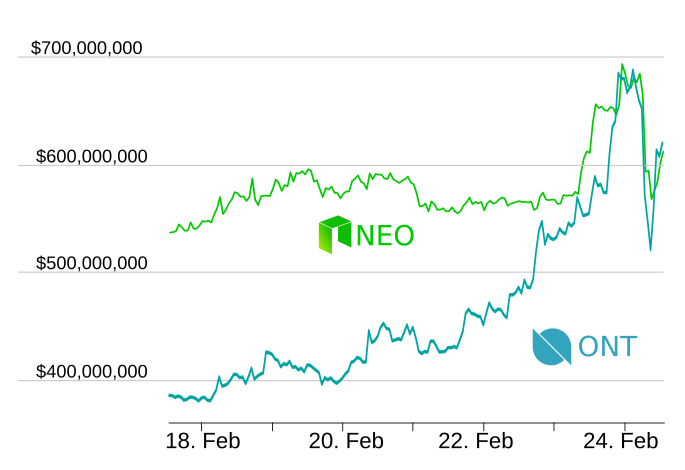 Ontology has, at least temporarily, surpassed the market cap of its sister project NEO. The coin’s value increased by 54% over the week of Feb. 18, allowing it to gradually creep up on the value of NEO’s total coin supply. Ontology finally overtook NEO just below the $700 million mark based on data from CoinGecko:

Market data is still fluctuating, but this accomplishment could be a good sign for Ontology’s future. The close rankings also raise old questions about the relationship between Ontology and NEO—and questions about whether market cap value is a meaningful measure.

Cryptocurrencies constantly overtake one another, but NEO and Ontology are a special case. The two blockchains are closely related, as they share a parent company, Onchain. Both NEO and Ontology have asserted that their projects are separate, although they are nevertheless cooperating to some extent.

There is also a technical connection: Ontology runs its own blockchain, but the ONT token was originally built on top of the NEO blockchain. And although Ontology has a distinctive focus on identity management, both NEO and Ontology are focusing on becoming leading platforms for blockchain apps, or dApps.

Since the two platforms are fairly similar, Ontology’s high market cap this week could be a sign that Ontology can seriously compete with NEO. More cynically, it could be a sign that a single company is accumulating too much influence—incidentally, Onchain also has ties to a third blockchain, NKN, although that coin has a much lower market cap.

Market cap, is, however, a somewhat subjective measure. The data in the chart above is taken from CoinGecko, and each market aggregator has its own approach to measurement. CoinMarketCap, for example, puts Ontology’s market cap fairly low, as it has a different interpretation of how many ONT tokens are actually in circulation.

And, generally speaking, market cap is not necessarily a good indicator of success. Given that NEO and Ontology both intend to become active dApp platforms, their success in that regard may be a better marker. Unfortunately, dApp sites do not provide thorough data on either platform, but it appears that NEO currently hosts more dApps than Ontology does.

In any case, it seems possible that one blockchain or the other will become the next dApp platform to take on Ethereum, EOS, and TRON. NEO probably looms largest in public consciousness, but Ontology has been making serious efforts to promote dApp development in its own right. Competition could become tight regardless of market cap.