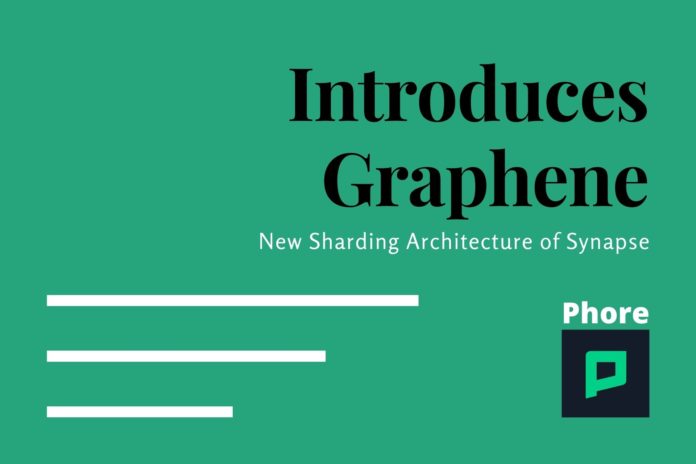 Decentralized blockchain platform Phore has come a long way in its journey of offering secure, flexible, and scalable blockchain solutions to users. To expand the platform capabilities further, the Phore community has decided to implement the new sharding infrastructure under the Synapse update.

The implementation of the smart contract-based sharding infrastructure will offer nearly infinite scalability to the Phore blockchain. The Synapse will also serve as a new, independent cryptocurrency of the Phore blockchain that will help in introducing staking capabilities as well as unlock massive opportunities for Phore in the DeFi space.

Introducing Graphene to the New Sharding Architecture of Synapse

The reason behind introducing Graphene to the new Sharding infrastructure of Synapse is creating an extremely versatile and lightweight network which is also extremely secure and strong.

Over the next few weeks, Phore will bring the Graphene updates to Synapse. Implementing the Graphene architecture is a complex process and the team is working to develop a high-performance and secure network architecture without compromising on the functioning of core features and protocols.

Besides, the team is also actively working to overcome all the hurdles that can come in the way during the development process. Below are the two critical and complex problems that the team solved while implementing Graphene.

As said, the goal with Graphene is to create a very flexible network that is strong and secure at the same time.

To expand the resulting capabilities and scalability of its blockchain, Phore has decided to introduce a brand new smart contract infrastructure dubbed sharding that offers near-infinite level scalability.

Besides, the Phore blockchain also rewards its token holders via masternode and staking rewards with a whopping 20% ROI every year. The Phore Synapse will introduce a completely decentralized governance system.

Synapse will bring the ability to process millions of transactions per second on the Phore blockchain. It can run a dedicated “shard” blockchain for any application while virtually eliminating the gas fee. Synapse can also link multiple smart contract protocols which will be a major push to the growth of a Deft ecosystem. Besides, Synapse can also bridge cross-chain smart contracts like TRX, EOS, and ETH.

The Phore Synapse aims to be the future of DEFI developments by getting the Phore blockchain closer to the DEFI ecosystem.

The Phore blockchain has some path-breaking changes ahead in line that will transform the network’s functionality and operational capabilities to new heights.