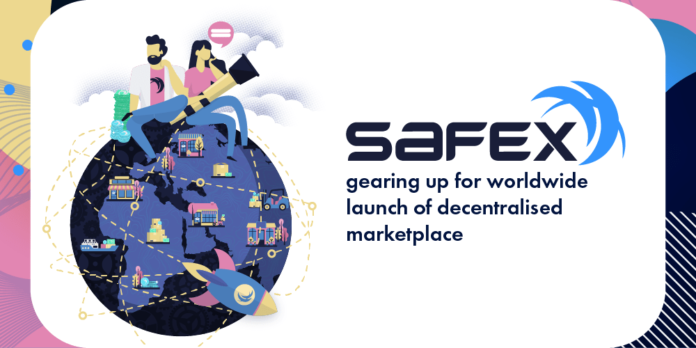 Bitcoin Press Release: E-commerce platform Safex has announced new updates to its native Blockchain that will enable on-chain P2P trading, and provide a secure and private way for users to buy and sell, through its online marketplace. The mainnet launch targeted for the end of 2019.

NOV 13th, 2019. Belgrade, Serbia. – After two years in development, Innovative e-commerce platform Safex has announced that early public Beta testing for its decentralized marketplace protocol is underway, with the Community now working with the beta testnet, with Mainnet launch targeted for the end of 2019. The Safex decentralized digital marketplace is built atop a privacy-centric blockchain and will offer consumers a safe, secure and private environment in which to buy and sell goods and services, direct person to person without a 3rd party, or middleman.

A Protocol, A Community, An Ideal

Since Bitcoin’s emergence in 2011, as a ‘Peer-to-Peer Electronic Cash System’ (P2P), the idea of a decentralized system upon which individuals could freely trade with one another, without a centralized authority has been at the forefront of almost every major technological leap in the blockchain industry.

It was this concept of a truly open and borderless P2P trading system that led to the creation of Safex — A decentralized protocol and community built on the original concepts of the individual rights to privacy, security, and control over transactions. Since 2015, Safex has been working tirelessly on the development of its privacy-oriented blockchain to protect these ideals, and to elevate P2P trading for mass adoption.

Safex has been designed as a 2-coin system, developed on a heavily-modified cryptonote blockchain, to usher in the world-scale marketplace, and a unique type of commerce-focused smart contract function. Safex will launch its own “native” marketplace app, as well as provide all the necessary tools and API for others to integrate into their own app and website. And because it is decentralized, the entire network is only made out of protocol, buyers, and sellers. In this way, the values and possibilities are determined only by the network participants, possibly paving the way to the future of how we do commerce.

There are so many use cases for user privacy to be the focal point for technology, but for the practical understanding of an everyday user who wants to participate in e-commerce, the Safex focus on privacy stems from the major vulnerability suffered by most centralized commerce platforms: data breaches.

That doesn’t even go down the path of other centralized platform shortcomings, such as the non-transparent and arbitrarily large amount of commissions, unwarranted collection of personal data and snooping on online behavior, and an unfair and opaque system for visibility of trades and listings.

Using Safex is taking back control of your own data, your own privacy, your own funds, and your own revenue.

The Safex Economic System: A Tale of 2 Coins

The Safex economic system is based on two coins – Safex Cash (SFX) and Safex Token (SFT). SFX is a mineable, privacy-based cryptocurrency that people can mine and use to shop on Safex Marketplace, and is also the cryptocurrency that underpins the Safex blockchain. SFX stores all the MP data, transactions, and is used to pay for transaction (and all actions) on the blockchain.

SFT is the Safex utility token, and store of value. SFT will enjoy a wide range of functions, not least of all, as an incentive for the community to finance and support the creation of the Marketplace. SFT will be used to open user accounts to buy and sell on the Safex marketplace.

Users are also motivated to hold, and lock in SFT, to participate in the revenue share system. Users can even use SFT to set up curated web stores, charging listing fees to sellers showcasing products  their stores.

Safex’s unique value proposition has attracted the attention of a number of different exchanges, including up and coming, trusted cryptocurrency exchange Xcalibra, which has already integrated both SFX and SFT as part of their initial trading pairs.

Safex is the source of this content. Virtual currency is not legal tender, is not backed by the government, and accounts and value balances are not subject to consumer protections. Cryptocurrencies and tokens are extremely volatile. There is no guarantee of a stable value or value at all. This press release is for informational purposes only. The information does not constitute investment advice or an offer to invest.

Craig Wright Predicted Bitcoin, Litecoin Should Be Dead By Now

Craig Wright, self-proclaimed creator of Bitcoin (BTC) is no stranger to controversial statements. But his prediction made this time last...