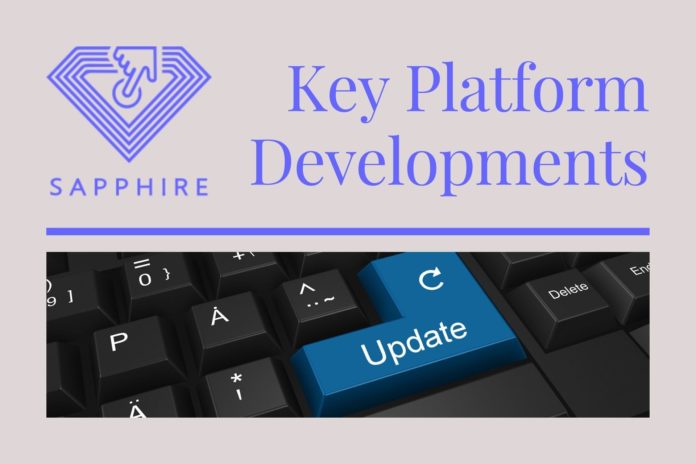 Over the last few months, the Sapphire Coins crypto project has made good development as it continues to grow its user community. The Sapphire Coin project was launched with the initiative to push cryptocurrency usage in the real-world economy.

With a clear goal ahead of them, the Sapphire Coins project focuses on important aspects of crypto usage like Stability, money supply control, and real value creation.

To support their goals of pushing crypto-use to the mainstream economy, the project developers have been religiously working to create a robust infrastructure, and provide its users with a seamless experience with crypto transactions.

The SAPP Coins aims to cater to all market needs of the real-world economy. May it be sending money instantly or making payments at PoS terminals.

Citing high demand from the vastly growing community, the Sapphire team has planned and introduced a few important changes to its platform along with its future sibling KYANITE and HELIODOR.

Key Developments to the Sapphire Platform

As the Sapphire community continues to expand, the project team found some vulnerabilities in the PIVX code that supports Sapphire. Thus, the community has decided to move towards a more stable and secure code of DASH.

The SAPP Coin and HELIODOR coins will be basically stablecoins with the aim to provide payments, secure money transfers, and other banking services. Having a robust infrastructure in place like that of DASH will allow them to bring more security and stability to the platform.

As per the current timeline, the complete tradition from PIVX to DASH will happen tentatively around December 2020. The Sapphire team also plans to introduce a completely new concept called ‘Mastermining’.

This will be a PoW-based mining functionality but without the disadvantages of PoW while at the same time increasing the security of the network.

The KYANITE Fork and the Upcoming HELIODOR Fork

Also, as per the initial plans, SAPPHIRE will undergo a double-fork to create two new coins – KYANITE and HELIODOR. The long-term plan of Sapphire is to expand its footprint to three major areas of the Internet.

The Sapphire Coin (SAPP) will act as a “consumer coin”, the KYANITE (KYAN) will be the “adult/gaming coin”, and ultimately the HELIODOR will be the “financial/bank coin”.

Earlier this month on September 10, the Sapphire announced its first fork for KYANITE wherein the KYAN coins will have similar specifications to the SAPP Coin. Just as the SAPP Coin, the collateral for masternodes in the KYAN Coin is kept at 200000 KYAN.

Talking about the rewards distribution, 45% of the block rewards will go to the miners, 45% will go to masternodes, and 10% goes for governance. The KYANITE continues to remain a PIVX code as the security requirements aren’t very high. The KYANITE receives the latest version of PIVX.

Once Sapphire moves to DASH by December 2020, the team will generate HELIODOR coins by another fork. Just as KYAN, all Sapphire holders will get an equal number of HELIODOR coins. As said earlier, the goal with HELIODOR will be to offer crypto banking services. The rewards for HELIODOR shall be mainly financed through fees.

Back in July 2020, Sapphire joined ZCORE, one of the world’s largest masternode hosting platforms.

Expanding its footprint in the market, the SAPP coin also got listed on the popular Graviex exchange and also on Finebox.

All-in-all we can say that the Sapphire team continues to bring new developments to cater to its vastly expanding community.