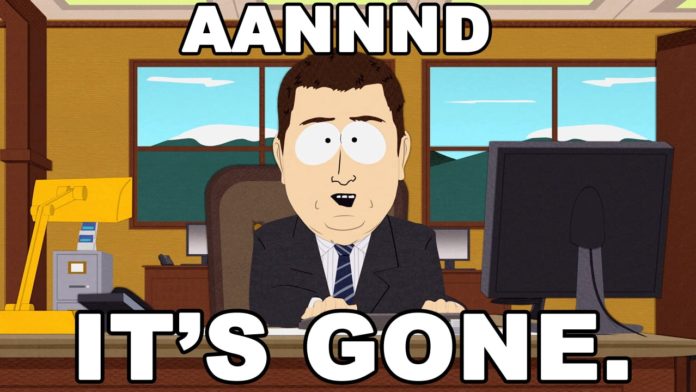 For hours, the Savedroid website is offline, the startup is unreachable and the CEO sends holiday pictures. Investors wonder if they have become victims of fraud.

A meme from the US series Southpark, with the words “And it’s gone” – more is no longer on the website of the German flagship Savedroid. A hack of criminals? Or did CEO and founder Yassin Hankir get away with the company’s capital? Many questions are open.

Only recently Savedroid had sold six billion tokens in an ICO and taken up to 40 million euros. Around 35,000 small investors took hold. Users and investors have been wondering for hours whether unknown persons could gain access to the Savedroid systems and whether they are in danger of becoming worse.

Only a few days ago, CEO Yassin Hankir attended the Crypto Conference C3 in Berlin and promoted his company. Now he is gone. Inquiries left the CEO for hours unanswered, calls to his cell phone ran on the mailbox. Also, the support phones from Savedroid seem to be unoccupied and the administrators of the associated telegram channel are offline.

Instead, a tweet with the message “Thanks guys!” Appeared on CEO Hankir’s Twitter account. Over and out … #savedroidICO “and two pictures. One shows Hankir at the Frankfurt airport, the other a beer bottle of the Egyptian beer brand Stella in front of coastal panorama. 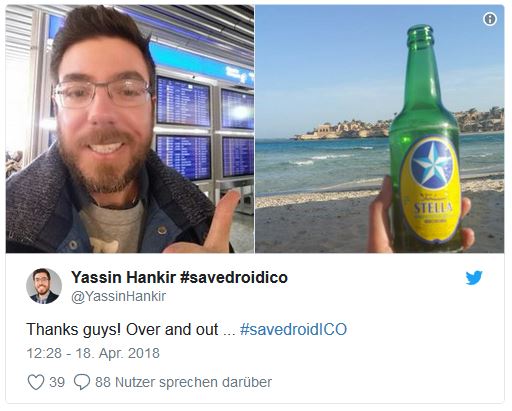 For some time users complain on profiles of the startup that they receive despite paid money no tokens in return. So far, however, it is completely unclear whether the Savedroid team has withdrawn a so-called exit scam and has fled with the money of investors abroad. It is also possible that the startup was only hacked and keeps covered so far with public statements.

But investors also responded to demand from start-up scene wondering. “In all honesty: I just got off the plane and saw four messages on my mobile phone to Savedroid,” said investor Dennis Weidner told Gründerszene. “I also do not know what is happening at Savedroid.” He knows founder Yassin Hankir personally and could hardly imagine an exit scam. In view of the website, which has been dead for hours, he is also at a loss.

Also invested is the Investment and Structural Bank Rhineland-Palatinate. There one gives oneself more confident: “with the enterprise Savedroid everything is alright”, said the ISB opposite the Wirtschaftswoche. “We have no reservations.” But you have not had contact with the founder today.

Update:
Thursday morning there was now the education in the form of a video that CEO Yassin Hankir has uploaded to YouTube. He confirmed what some observers suspected, namely that the action was a public relations stunt and he did not sell himself as indicated.

In the nearly five-minute clip, Hankir apologizes for the “drastic campaign” and explains his motivations. Therefore one did not want to have fun with the action, but point out the risks and many scams in the crypto-world. This would damage the scene massively. It was intended to show that even in the highly regulated German market it is possible for entrepreneurs to simply sell off with all their funds.

Hankir calls for even more stringent industry conditions and higher standards for ICOs. At the same time, he announces that Savedroid plans to advise other companies on their ICOs as part of a new business area. Meanwhile, the website is back online with the corresponding information.
reactions

Whether Savedroid actually did a favor with the stunt remains to be seen. Initial reactions to online networks like Twitter are rather negative. So users accuse Hankir and his company to have completely lost the trust of users with the questionable action. It also remains to be seen how investors react. To what extent they were privy to the action was for the time being unclear.