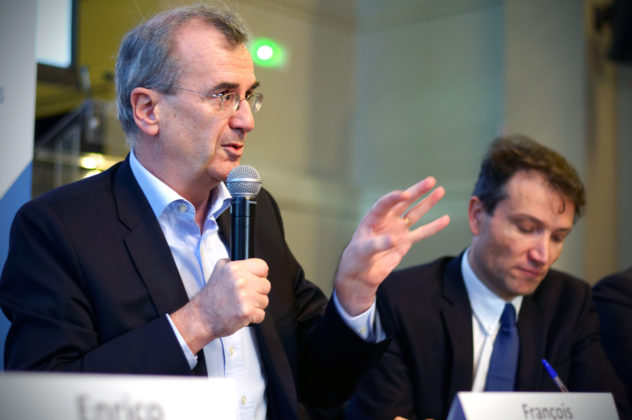 According to Bloomberg, Villeroy believes that cryptocurrencies pegged to fiat will be the ones to experience greater utility within the mainstream finance apparatus. Speaking in Paris on Tuesday (May 14, 2019), Villeroy, a frontrunner for the ECB Presidential seat opined:

The Bank of France is “observing with great interest initiatives in the private sector which aim at developing networks within which ‘stable coins’ would be used in transactions involving ‘tokenized’ securities or goods and services.” These are quite different from speculative assets like bitcoins, and more promising.

Villeroy’s comments should come as no surprise as bankers haven’t hidden their dislike for Bitcoin and its ability to disrupt their stranglehold on global finance. The disintermediation of the payments system is in many ways an attack on their bottom-line.

Answering questions during the ECB Youth Dialogue on Wednesday (May 8, 2019), ECB President Mario Draghi described Bitcoin as not being a “real currency” but more like an asset, saying:

A euro is a euro – today, tomorrow, in a month, it’s always a euro. And the ECB is behind the euro. Who is behind the cryptocurrencies?

Draghi fails to mention that questionable monetary and fiscal policies which are often political have a negative impact on the purchasing power of fiat currency. One BTC will always be worth one BTC.

In February 2019, the U.S. Federal Reserve did a complete 180 reportedly under duress from the White House to adopt a more dovish stance. Several commentators say quantitative easing and negative interest rates will put the mainstream market on the path of another major collapse.

While uncertainty reigns in the mainstream market, Bitcoin continues to rise even higher, adding more than $2,000 in price value in less than a week. BTC is up more than 120 percent since the start of 2019.

Bakkt on Monday (May 13, 2019) announced that it would begin testing its physically-settled BTC futures contract in the summer. The company also says it is close to obtaining the green light from the U.S. Commodity Futures Trading Commission (CFTC).

Do you agree that the banking class is running scared of Bitcoin? Let us know your thoughts in the comments below.

Cryptocurrency Exchanges Are Cleaning up Their Act

Ask a dozen crypto traders for the reason behind the recent rally and you’ll get a dozen different theories. Bakkt...