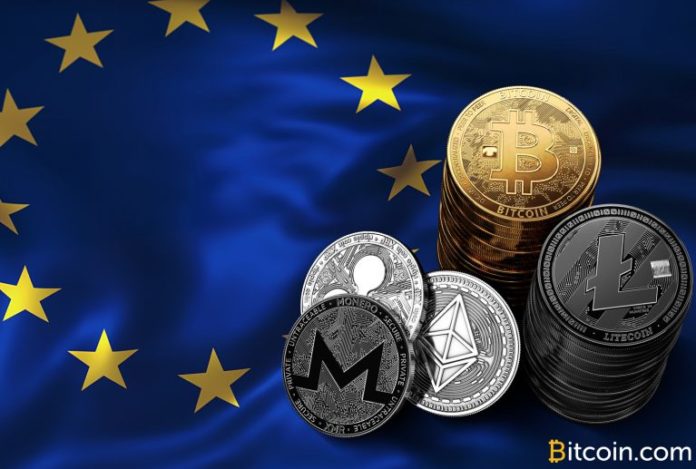 According to a recent survey of 10,000 European residents, 63% believe that cryptocurrencies will still be around in 10 years. However, polled respondents were not so confident about bitcoin core (BTC) lasting over the next decade as only 49% of participants believe BTC will be around.

63% of 10,000 Polled Europeans Believe Cryptocurrencies Will Still Exist in 10 Years

Japanese cryptocurrency exchange Bitflyer was recently licensed to operate in the European Union, and on April 24 the company’s European arm published a poll of 10,000 residents from various countries to find out how popular digital currencies are today. The survey was sent to residents from Norway, France, Belgium, Germany, and other regions while the researchers also parsed the responses by country. The biggest question on the survey asked participants if they believe cryptocurrencies will still exist in 10 years. Out of the entire lot of respondents, 63% think cryptos will still be around within the next decade. Residents from Norway seem extremely positive as 73% believe that digital currencies will continue to trend in the future. This is followed by those in Italy, the Netherlands, Poland, Spain, Denmark, and Germany who voted above the 60th percentile. Respondents from Belgium, the U.K., and France showed stronger pessimism (59% or lower) toward cryptocurrencies lasting over the next 10 years. Andy Bryant, COO of Bitflyer Europe, said the poll results indicate that people are looking past the prior cryptocurrency hype and digital assets have become more established.

“It’s very easy to forget just how new cryptocurrencies still are; we’ve only just celebrated bitcoin’s 10th birthday, so for the majority of consumers to believe in crypto’s future is without a doubt an achievement,” Bryant stated after publishing the poll.

Lack of Confidence in BTC Dominance

As for the coin with the largest market capitalization today, bitcoin core (BTC), Europeans are less confident in its existence going forward. Only 49% of all the European respondents think BTC will exist 10 years from now. When separated by country, Italy (55%), Poland (53%), Spain (51%), the Netherlands (51%), and Norway (50%) expressed the most confidence in BTC. The poll also shows that Denmark (49%), Belgium (45%), the U.K. (43%), and France (40%) are the least optimistic about BTC’s future. Only 7% of all the European respondents believe that BTC will still exist as “an investment” in the next decade.

Respondents in Poland are positive BTC will still exist as an investment in the next decade but only 11% of them feel this way. This is followed respectively by Italy (9%), Belgium (9%), Germany (8%), the Netherlands (7%), Norway (6%), Denmark (6%), Spain (6%), France (6%), and the U.K. (4%). The poll indicates that a good portion of Europeans think digital assets will do well in the next 10 years in regard to the cryptoconomy as a whole. On the other hand, respondents showed considerably less optimism in BTC over the next decade, and BTC market dominance is also a good indication of the declining popularity of the digital asset.

BTC’s market dominance plummeted after staying above 78% for seven years. The decline took place on March 6, 2017, and BTC dominance has been wavering between 33-56% since Jan. 8, 2018. Furthermore, the Bitflyer poll capturing the opinions of 10,000 unique individuals from various countries across the European Union is a nice data set in regard to the sentiment toward cryptocurrencies in 2019 and beyond.

What do you think about Bitflyer Europe’s poll with 10,000 unique respondents detailing their opinions about BTC and cryptocurrencies going forward? Let us know what you think about this subject in the comments section below.

The post Survey Shows Europeans Think Crypto Will Last a Decade, but Are Less Confident in BTC appeared first on Bitcoin News.

Bitcoin price has room for immediate 12 percent growth, according to the latest figures showing current availability of major stablecoin...