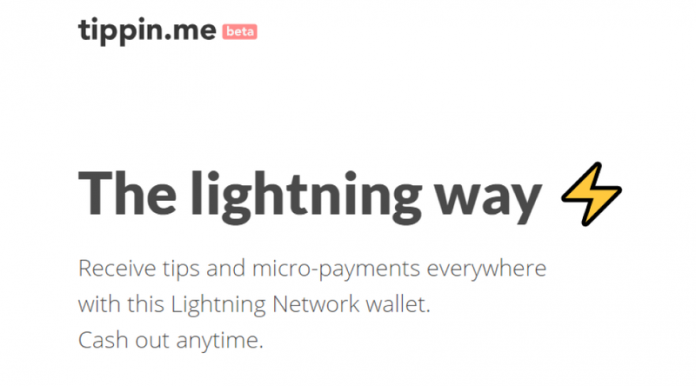 The developer for this project described some of its details on a Reddit thread to the r/Bitcoin subreddit. The dev says that it “allows you to receive tips (micro-payments) over the Lightning Network, anytime, anywhere, without needing a LN node,” by means of “a simple web custodial wallet.”

Upon signup, tippin.me “gives you a personal tippin’ link to be shared that contains a fresh QR Invoice with an undefined amount to be paid. If anyone sends you money to that QR Invoice, this amount will appear in your tippin.me dashboard.” The overall plan is for people to “share it to receive tips across webs, blogs, patreons, forums, etc. using Lightning Network.”

It should be noted that, since payments must be routed through the program, the wallet is custodial. If you’re going to use it, you’re temporarily trusting your funds to the developer, so some might find it less secure than a trustless, non-custodial solution.

The project is still in beta and, as a result, it hasn’t been adopted by or extended to blogs, forums or other third-party platforms. However, the developer claimed that such functionality can be implemented later down the line if there is sufficient demand.

Shortly after the project’s announcement, the lone, semi-anonymous developer announced that the website was operational, as his “personal contribution to push Lightning Network adoption.”

The Lightning Network has attracted a large level of interest from the crypto space for its ability to send micropayments over the Bitcoin Network and tackle the blockchain’s latency and scalability issues. The developer of tippin.me claimed that he is “doing it for free, with no support, and on [his] own servers,” with the express purpose of streamlining Lightning’s adoption. Additionally, he later announced a free airdrop of 500 satoshis to the first 500 users to request it, all using the Lightning Network.

The project is in beta currently, and it is unclear where exactly the roadmap will go from here. Nevertheless, it is important to note that this project is not part of a startup company and is instead a totally free program made by a single developer.

Bitcoin Press Release: OneHash, the fastest-growing mutual and exchange bitcoin betting platform has just announced the release of the brand...