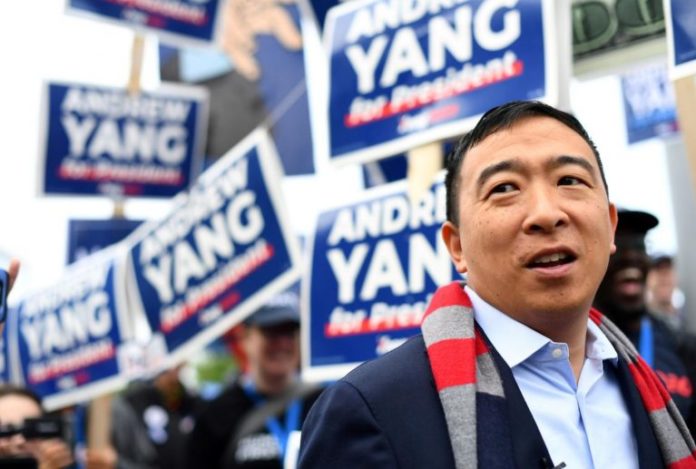 Andrew Yang, who is running for U.S. president in the 2020 election, has explained what his priorities will be regarding cryptocurrency under his administration. He said that crypto investors are finding a way to make use of their investments and regulations cannot impede it. Yang advocates for a uniform, nationwide set of crypto regulations so the U.S. is not stuck with state-by-state policies.

Andrew Yang is an entrepreneur who is running for U.S. president as a Democrat in 2020. In an interview with Bloomberg’s Joe Weisenthal in Iowa on Wednesday, Yang was asked about his policies in a number of areas, including cryptocurrency, universal basic income (UBI), and the coronavirus.

“There is a lot of people who are like really big cryptocurrency fans … they love Andrew Yang,” Weisenthal began. He asked the presidential candidate what he would do under his administration with regard to regulations of the crypto industry, such as bitcoin exchanges. “Do you support the right of people to use their bank accounts, credit cards, etc., to move into cryptocurrencies and other forms of money that aren’t as easily tracked by centralized authorities?” Yang replied:

What I would say is that we need to have a uniform set of rules and regulations around cryptocurrency use nationwide because right now we’re stuck with this hodgepodge of state-by-state treatments.

Emphasizing that the current way is “bad for everybody,” including innovators who want to invest in the crypto space, Yang declared: “So, that would be my priority … just clear and transparent rules so that everyone knows where they can head in the future and that we can maintain competitiveness.” He believes that the underlying technology of cryptocurrencies has “very, very high potential and we should be investing in it.”

An ABC News national poll from Jan. 26 shows Yang in fifth place, with 7% support. He was slightly behind Michael Bloomberg, but well behind Joe Biden, Bernie Sanders, and Elizabeth Warren. However, he was ahead of Pete Buttigieg and Amy Klobuchar.

Weisenthal asked Yang during the interview: “Would you support sort of monetary freedom for people that want to move their money away from fiat currencies, get their money out of the banking system into cryptocurrencies?” He elaborated: “Right now, you have banks restricting payments to these platforms and so forth. And people feel like government regulations are essentially impeding in their desire to do that.” Yang responded:

Right now people who are investing in these currencies are finding a way to, you know, do so and make use of their investments. No, I don’t think that you could impede it with regulations if you tried. Yang has been outspoken about his crypto policies for quite some time. On his campaign website, he noted the rapid growth of cryptocurrencies. However, he explained: “A national framework for regulating these assets has failed to emerge, with several federal agencies claiming conflicting jurisdictions. At the same time, states have come up with a patchwork of varying regulations that make it difficult for the U.S. cryptocurrency markets to compete with those in other jurisdictions, especially China and Europe.”

He pointed out that different government departments treat cryptocurrency differently, such as property, commodities, or securities. He believes that it is time for the federal government to create clear crypto guidelines, asserting:

With clear guidelines, “businesses and individuals can invest and innovate in the area without fear of a regulatory shift,” Yang wrote, reiterating that “Investment in cryptocurrencies and digital assets has far outpaced our regulatory frameworks in the U.S.”

What do you think about Andrew Yang’s view on cryptocurrency and him becoming the U.S. president? Let us know in the comments section below.

Images courtesy of Shutterstock and Reuters.

Japan’s Line social network, the largest in the country, has announced the launch of its digital currency ‘Link’ in the...